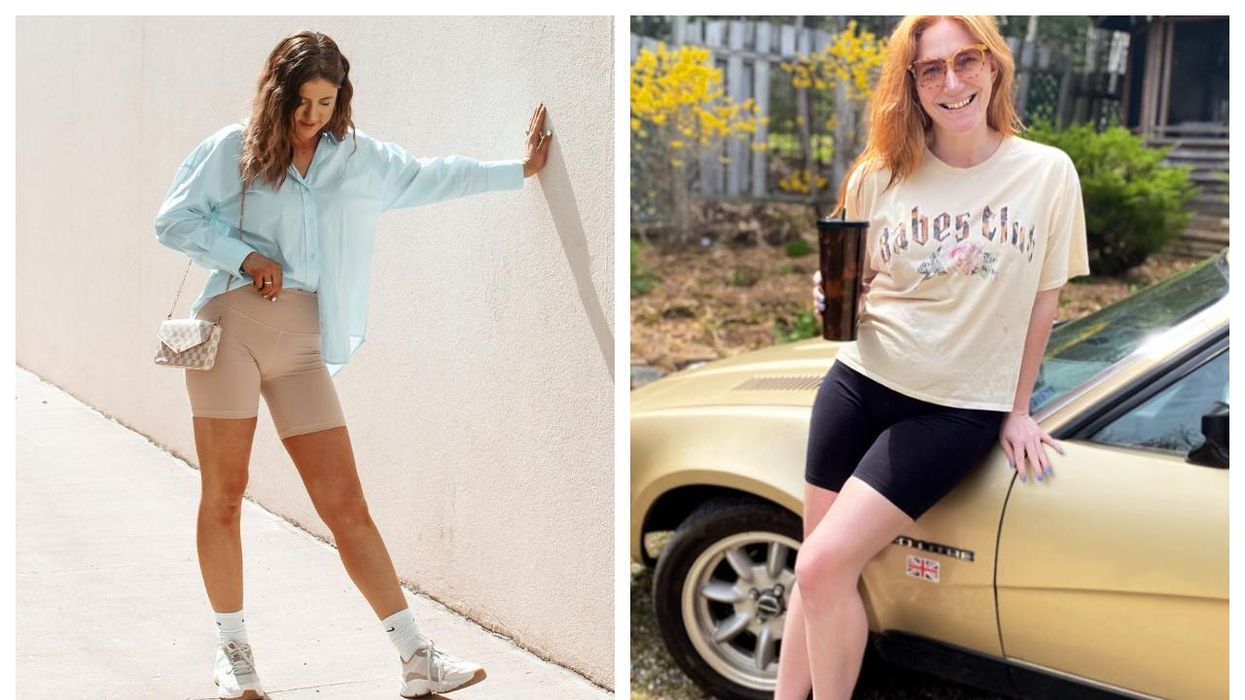 Not only are they a comfortable option for physical activities like biking around the city, they're great for everyday wear, too. You can wear them while you WFH, go grocery shopping or hang out on the patio with your best buds.

Whatever your budget is to upgrade your wardrobe this season, you can find a great pair from all your favourite stores like H&M and Lululemon.

Details: Old Navy always has a huge selection of bike shorts. The gray floral print shorts are relatively new but you can pick between 14 other patterns and colours and the sizes range from XS to XXL.

Details: The cool thing about Lululemon is that their clothes come in a wide range of sizes. We love inclusivity! These shorts go up to size 20 and come in other colours like navy blue, burgundy and charcoal camo.

Details: Can you believe this is made out of recycled fabric? These shorts from Simons are so soft and breathable, it seems like a second skin when you put them on.

Details: These are technically designed for yoga but a lot of people just wear these for everyday activities because they're so comfortable. The kaleidofloral print is gorgeous but if you're not into that, you have 14 other designs to choose from.

Out From Under Trailblazer Bike Shorts

Details: These shorts from Urban Outfitters are made of polyamide and spandex so they're super stretchy. Perfect for lounging around the house or running errands outside. They only come in two sizes, though: XS/S or M/L.

Details: Camo print is basically a neutral, so it can go with any colour. These are EXTRA high-waisted if you want more coverage when you're wearing a crop top.

Details: H&M is the go-to for all basics. These black shorts are knee-length and high-waisted with concealed pockets to store your keys or cards so you don't have to carry around a purse.

Details: The dusty red colour is so gorgeous and not something you see often. It really does pair well with an orange top as seen here. It's available in sizes XS to 3X.

Details: You can always count on Sport Chek for awesome discounts on clothing. A selection of shorts are on sale right now including these lavender cobra shorts that come in size S/M or M/L.

Details: You can't go wrong with floral print. Like, ever. Out of the 50 reviews online, the majority of customers seem to praise these shorts for being comfy, cheap and true to size.

Details: These are a little on the pricey side but if your closet is already full of Anthropologie goods then you can make room for one more thing. The yellow stripe on the side is just so cute.

Deals Canada
Discover Narcity
Get the latest and greatest stories every day in your inbox.

Obama said Trudeau "has been an effective leader and strong voice for democratic values."

It seems like this friendship is alive and well because Justin Trudeau was praised by Barack Obama and the PM sent a sweet message right back.

The former president tweeted to his "friend" on September 16 and said that he's wishing Trudeau "the best" in the upcoming Canadian federal election.

Ouch, that's got to hurt! With election day just around the corner, Canada's major party leaders are not holding back on their criticism of one another.

With COVID-19 cases on the rise in Alberta, the provincial government has just dropped a bunch of new public health rules.

According to a September 15 news release from government officials, Alberta has declared a state of public health emergency and plans to implement new health measures to expand capacity, increase vaccination rates and reduce transmission of COVID-19.