Voices from Calgary, Canmore and Banff. 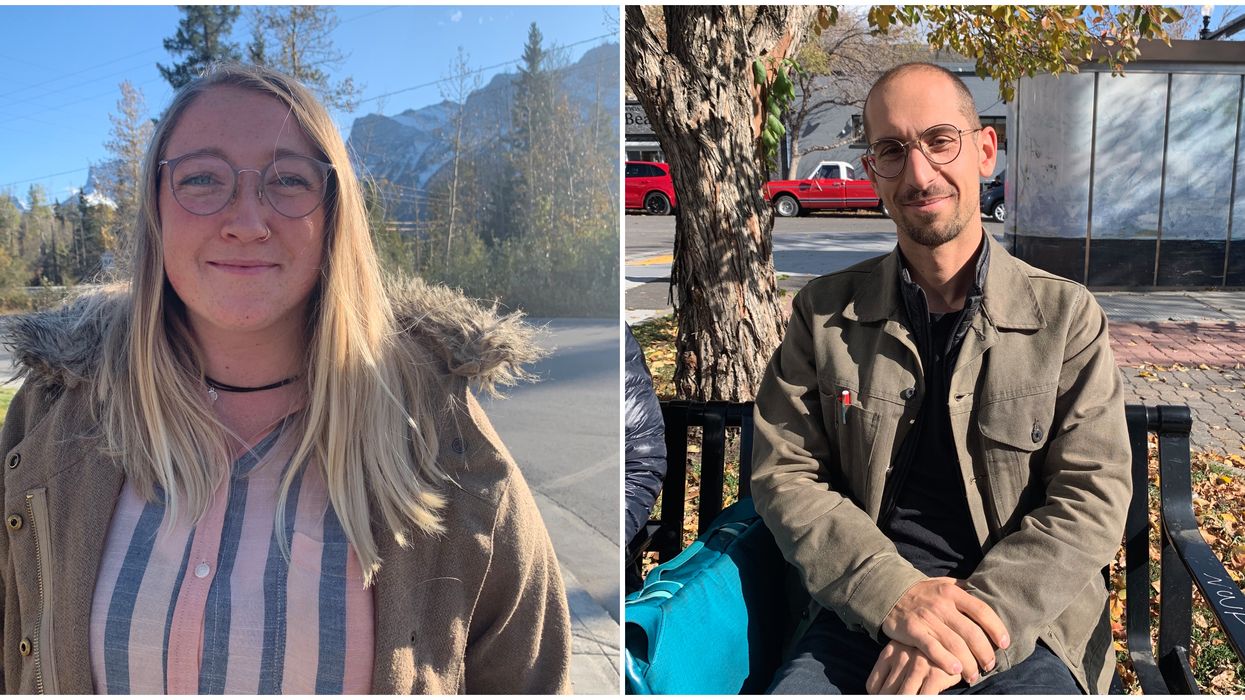 If you live in Canada, you are probably thinking about the federal election. Signs are popping up on lawns, the debates have taken over the television, and it’s the only thing that most of us can talk about. Narcity spoke to Albertans on the federal election in Calgary, Banff, and Canmore to get an idea of what they're feeling as the election draws nearer.

Narcity asked 13 Albertans what current issues are the most important to them, what questions that'd like to see answered the upcoming debates, and what they want to see from Canada's next Prime Minister more than anything.

Though answers varied, the commonality among the people we spoke with is that they want to see honesty and real change. In addition, very few Albertans who we spoke to found themselves excited by any of the candidates at all. Many of the people we chatted with said they feel like the candidates are more concerned with arguing with one another than talking about policy.

In our conversations, Albertans raised concerns about education, healthcare, indigenous relations, women's rights, and more. Though these individuals don't speak for Alberta as a whole, here is what 12 Albertans want to see from the next prime minister in their own words.

"I’m curious to see how people spin the issue of climate change into something more productive that can actually be implemented in real policy. Whether we’re talking about other industries, how that gets funded, or new technologies. I’d rather hear people talk about what’s coming down the pipe in terms of that stuff as opposed to yelling at each other about tax prices and such. They all seem too focused on each other, to me. Nobody is talking about policy."

"My number one priority right now is seeing a government that’s committed to transitioning to renewable energy. I’m very curious to see what a new government could do about that and it’s also very near and dear to my heart. I think the protection of wild space and national parks is very important. I’d also like to see a leader who is committed to issues of equality, women’s issues, reconciliation with Indigenous communities, LGBTQ2+ issues, and pro-immigration."

The Economy Isn't The Only Issue

"Affordable access to social services and education as well as indigenous rights are the issues that are the most important to me with regards to the upcoming election. I want to know what steps each candidate will actually take to fulfill their campaign promises. I want to know that their promises aren’t empty and that they actually have plans in place. I hope to see the next government stop placing emphasis only on the economy and shift some focus to people and social issues."

Be An Honest Leader Who Keeps Your Promises

"For me, health care and education are the most important issues in the upcoming election. I think Jagmeet Singh seems to be the only one that is concerned about these issues. Andrew Sheer has voted against same-sex marriage in the past, which concerns me. At the upcoming debates, I think the candidates need to be asked how they are going to deal with indigenous relations. I want to see Canada’s next Prime Minister be an honest leader who will stand by what he or she says she is going to do."

"Long term environmental protection is the most important to me, even though there are a number of important issues coming up in this election. From the last election, one of my biggest issues was that there were a number of promises that were not necessarily fulfilled. Moving forth, I would like to know how each candidate will hold themselves accountable if they are elected. Canada has only had one female Prime Minister and I think it would be a real turn for our country to have a woman elected as the next Prime Minister."

Don't Pretend To Have All The Answers

"The biggest issues I think Canadians are being faced with right now are the rights of people who are marginalized and the environment. In the upcoming debates, I want to know what is one thing that is actually going to have an impact on climate change. It’s such a pressing issue, it’s so important, but what do I do? I’d like to hear this from the candidates. What I want to see more than anything in the next Prime Minister is curiosity. I want them to be curious, rather than having all the answers."

Ensure Equality for All People

Chris Bartolomie, 61. Canmore, AB. Supervisor of Arts & Events for the Town of Canmore.

"Clean water for everyone is a very important issue for me, as well as access to essential services, education, and the arts. Right now, there are no candidates that are exciting for me. They all have their flaws, for sure. It’s a difficult time to vote. I don’t know if I’m as much undecided as I am uninspired. I’d like to hear the candidates speak to the missing and murdered indigenous women. I’d like to know what’s going to happen there. What would make me the most pleased with a new Prime Minister would be a leader that would ensure equality for all people."

"The issue that’s at the forefront of my mind right now is indigenous rights. I recently started working at a school that’s student body is 90% indigenous. I’ve become more aware of the daily issues they are facing, especially in direct comparison to the other schools I work in in the same division just 30 minutes away. I think Jagmeet Singh is the only candidate that seems to speak about indigenous people as people rather than simply a problem to be fixed. I’d like the upcoming debates to help clarify how the candidates have prioritized their initiatives and focus as politicians."

"I am the most passionate about solving climate change and budgeting for education. There’s a huge problem with changing public education’s title because it’s going to impact how people view education and the funding that goes towards it. Class sizes will grow, there will be fewer jobs for teachers, it’s going to be problematic. I want to hear the candidates address how they are going to support FNMI (First Nations, Metis, Inuit) students in public education and how they are going to foster reconciliation through education. All I ask of the next Prime Minister is honesty."

Take Action And Hold Yourself Accountable

"For me, the most important issue is the environment. More specifically, how we approach resource use in our country. I think the Green Party is equipped to tackle that right away as well as potentially the NDP. That said, I think, on the whole, everyone is unqualified to run a country on their own. There are a lot of people out there that are good at one thing, but not everything. It’s hard to choose one candidate for the entirety of what needs to be done. I’d like to see the next Prime Minister put forth some tangible results. Right now I am seeing very little action and accountability, I’d like to see that shift."

Bring Canadians Together And Heal Our Divisions

Landis Burr, 26. Canmore, AB. Student at the University of Calgary.

"I think the most important issue right now is the gap in affordability for our more vulnerable and poorest people. I don’t think there are any candidates that have a plan specifically targeting that. It seems the inertia for the main parties is the middle class. I would like to hear how the candidates would position action on climate change in relation to our resource-driven country, and how to come up with a plan to balance that. I think we should be ready for a new perspective in leadership, meaning someone that isn’t the traditional politician in entitlement, gender, and other things that fit what our stereotypical political is."

Sally Stanier, 23, Calgary, AB. Student at the University of Calgary.

"My current concerns are healthcare and education funding being cut. In my opinion, taking money out of those areas makes people in need even more vulnerable. I am also worried about the growing wealth gap in Canada. In terms of education, small class sizes have been a positive thing we’ve had in the past few years, but with funding cuts, I worry we’ll lose that."

In the upcoming debates, I would like to hear how the candidates plan to handle budgeting for education and health services. I want the next Canadian Prime Minister to focus on supporting marginalized communities and things such as gay rights. People should be allowed to be who they are and who they want to be. It’s 2019, we’ve come so far and I don’t want to see us move backwards."

*All interviews have been condensed and edited for clarity.