These creepy films will keep you up at night. 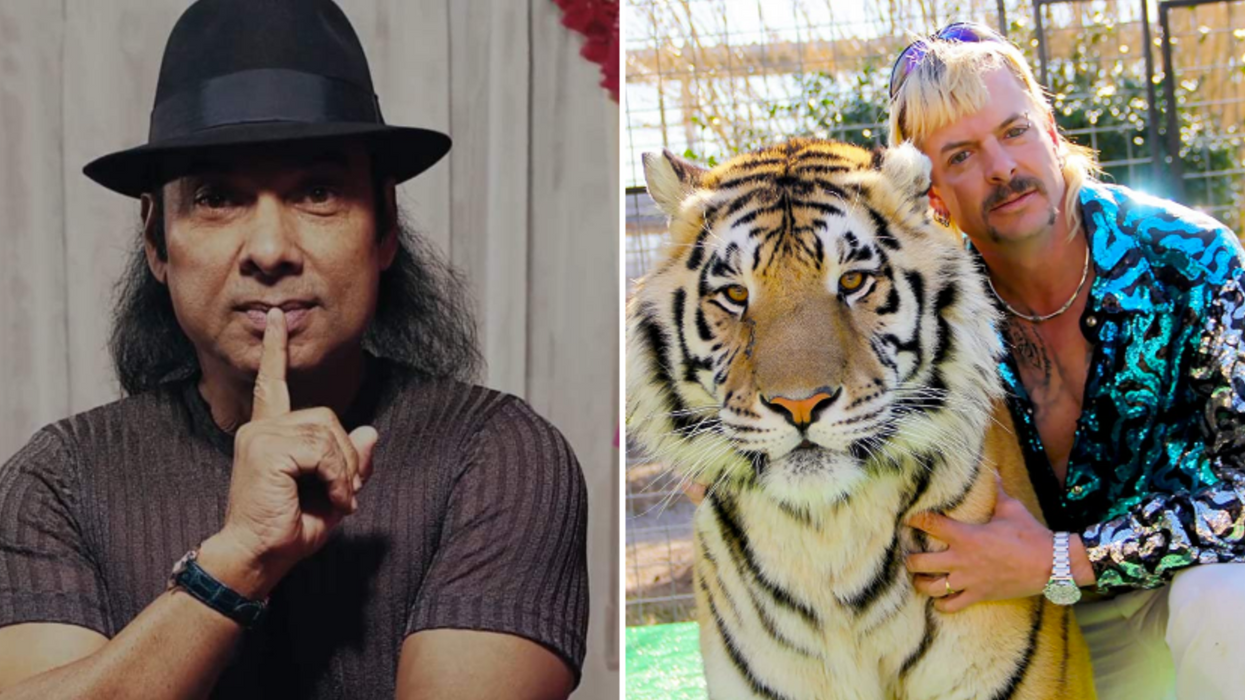 Love Joe Exotic (as soon to be portrayed by Nicolas Cage) and can't get enough of that Tiger King post-mortem (even if Joel McHale is just a wee bit too smug when talking to people who got their limbs mauled by giant cats)? Don't worry, we got your back.

If you can't get enough of the weird tiger-cult series, we've compiled a list of the best cult documentaries that you need to stream ASAP.

See, we know why people flocked to the Netflix hit in the first place, and it's the same reason why thousands of Americans–including Shaq!–sought out Joe in the first place: ours is a country obsessed with cults. We just can't get enough!

Luckily, while we remain in lock-down under shelter-in-place orders, we have 13 more delicious true crime docs about cults to keep you company. Enjoy!

Why You Need To Watch It: One of the best documentaries about a currently existing cult out there, Holy Hell tells the story of its documentarian, Will Allen, after 22 years spent in the Buddhafield cult.

Allen began following the doctrine of Buffhafield's leader, Michel Rostand, after his mother learned he was gay and he was invited to an "alternative" community up in the Hollywood Hills. To date, there are still 100 or so members living with Rostand on his Hawaii compound ... you'll leave this doc wondering why you haven't heard more about this still-existing cult.

Why You Need To Watch It: Executive produced by no less an acclaimed duo than the Duplass Brothers, Wild Wild Country became 2018's cult series (no pun intended) du jour after Netflix released the story as a six-part series.

Focusing on Indian guru Bhagwan Shree Rajneesh aka Osho and his Rajneeshpuram community, which relocated to Wasco County, Oregon in the 1980s, it sets the resident locals up for a war with Osho's second-in-command, Ma Anand Sheela.

Why You Need To Watch It: This 2007 documentary produced by the History Channel is a chilling look at the legacy of Jim Jones, the People's Church, and the events that caused the Jonestown Massacre.

On November 18, 1978, 918 members of the People's Church committed mass suicide in Venezuela after Congressman Leo Ryan was gunned down at the airstrip at Jones' orders, after arriving to inspect the conditions of the Jonestown compound.

Why You Need To Watch It: Eva Orner's 2014 documentary explores the rise and fall of the man who popularized Bikram yoga here in the United States.

Bikram Choudhury may seem innocuous when compared to Jim Jones, Charlie Manson or Joe Exotic, but make no mistake, the "hot yoga" guru was an apex predator: farming young women into his cult and gaslighting them into being part of his nubile harem.

Why You Need To Watch It: Jodi Wille and Maria Demopoulos's 2012 documentary is a fascinating look at a Hollywood health guru turned cult leader Jim Baker aka Father Yod. Unlike many subjects on this list, the Source Family was ultimately disbanded before they could kill anyone ... besides, of course, Yod himself, who died in a bizarre hang-gliding accident in Hawaii after his followers refused to bring him to the hospital (it was against his teachings).

Why You Need To Watch It: Using source material from Lawrence Wright's nonfiction book of the same name, Gibney painted a damning portrait of the church's current leader, David Miscavige, who peddled in brainwashing, harassment, wiretapping, kidnapping, extortion, and physical and psychological torture ... among other things.

Why You Need To Watch It: Amy J. Berg's scathing 2015 documentary is adapted from a 2011 book of the same name with an additional subtitle: My Seven-Year Investigation into Warren Jeffs and the Fundamentalist Church of Latter-Day Saints.

It's one of two documentaries on this list to zero in on the dangers of Jeffs, who is currently still running his church out of the Texas penitentiary where he is serving out a sentence of life plus twenty years for the rape of 12 and 13-year-old girls. The Book of Mormon, this is not.

Why You Need To Watch It: Look, all cults are messed up beyond reproach, that's obvious. But the Children of God sect, as led by Peter Berg, was potentially heinous. Operating as a "young people promoting the word of Jesus throughout South and Central America," this insidious sex cult soon revealed its true nature: a doctrine of abuse and exploitation of the children of its followers, which apparently included the parents of the Phoenix family (Joaquin, River, and their siblings) among its more high-ranking members. Not for the faint of heart.

Why You Need To Watch It: A must-see for anyone currently watching WACO on Netflix. This 1997 documentary details the 51-day stand-off known as the "Waco Siege," between the FBI and members of the Branch Davidian church at their compound in Texas. Though he preached peace and godliness, Koresh is as much to blame for the disaster at Waco as the bungled attempts at de-escalation from the Bureau of Alcohol, Tobacco and Firearms.

Inside the Manson Cult: The Lost Tapes

Why You Need To Watch It: There are so many documentaries about Charles Manson and his followers, who committed seven brutal murders over the course of two nights in Los Angeles in the summer of '69. Chief among them actress Sharon Tate, wife of Roman Polanski, who was pregnant with the couple's child at the time.

So what makes this Fox Inside edition special? It's more up-to-date than many of its predecessors, which relied heavily on archival footage at the time, and manages to score some candid interviews with members of "the family" still alive today.

Why You Need To Watch It: In the Church of Jesus Christ of Latter-day Saints, "sons of perdition" refers to people who, after death, will not be able to receive the glory of the lord.

In this 2010 documentary, it refers to the hundreds of teenage boys who have been cast out of the FLDS Church–away from friends, family and community–by its leader Warren Jeffs. Their crimes? Wearing short-sleeved shirts, listening to music and talking to girls.

The End of the World Cult

Why You Need To Watch It: Ben Anthony profiles Michael Travesser, leader of the Strong City cult, who claimed the Earth was going to end on October 31, 2007. Strong City isn't a cult that gets discussed as much in popular culture, so without spoiling anything, let's just say: this documentary packs a wallop.

Guerrilla: The Taking of Patty Hearst

Why You Need To Watch It: The kidnapping of Patti Hearst in 1974 by the left-wing revolutionary group the Symbionese Liberation Army will always be known as a textbook case of Stockholm Syndrome. After all, Hearst turned from captive to willing participant in the group's criminal activities.

A fascinating side-note brought to light in this 2004 PBS documentary? There was no "Symbionese Liberation Army," just a group of disgruntled college students who gave themselves a moniker to sound more legitimate.

And if that isn't the definition of a "cult case," I don't know what is.