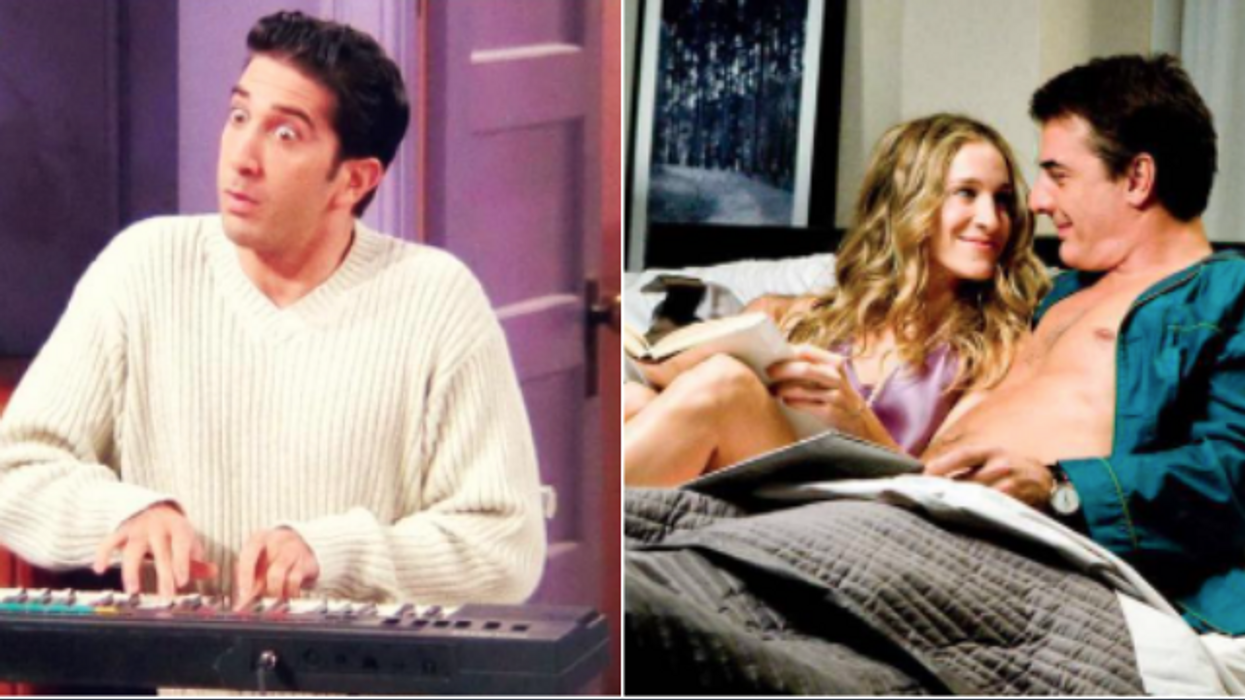 You thought you had it bad? TV girls of yore have been suffering some insane boyfriends over the past couple years. Whether they were manipulative, whiney, rude or annoying, some of our favourite TV heroines - like Carrie Bradshaw and Rachel Green - have had to deal with some true characters in their dating history.

This should come as a surprise to no one. He was deeply obsessed with Rachel and chucks anyone in the trash chute that stands in the way of him getting back with her. Julie?? "Take thee Rachel" at him and Emily's wedding?? Random bald girl from vacation?? All dumped for Rach. Lest we forget him making a pros and cons list, calling Rachel ditzy. He would later go to shaft Rachel's career and interests while being needy and possessive. Accuses Rachel of sleeping with Mark, sleeping with copy-girl 24hrs after big fight, uses "WE WERE ON A BREAK" until the end of time. Let's just say I used to date a guy that identified as Ross Gellar and we will never date again.

2. Larry Bloom from Orange is The New Black

Larry isn't pure evil, but definitely makes the list. He's not super threatening or super desirable - like finding a hair in your food that you're pretty sure was yours anyways. He never seemed to care a ton for Piper and also fucked her best friend who she co-owns a soap line with for basically no reason?? How long had she been in jail again? Maybe a season? God Larry.

3. Roy Anderson from The Office

OKAY when it comes to TV boyfriends few are shittier than Roy Anderson. He constantly slammed Pam, ignored her, treated her like a footstool for his workman boots. His IQ was probably a generous 27 and he regularly took advantage of the angel that is Pam Beasley aka stringing her along as a fiancee for years without planning a wedding at all. There's a reason she's called Pam Halpert now.

Big is debatably one of the worst TV boyfriends of all time. While Aiden was a bit of a yawn (sorry guys) atleast he didn't come crawling back to Carrie when he was MARRIED. After telling Carrie he couldn't commit. Cool cool cool. Go fuck yourself, Big.

The two names says it all. Jimmy Steve was a conman from the start. Although he Robin-hooded it most of the time, stealing rich people's cars and giving dryers to the Gallaghers, he was still very problematic towards the end. Lest we forget the fake marriage to Estefania - who he regularly banged - or getting Lip involved in shady car deals. When Fiona became the legal guardian of the kids, Jimmy became a crier and then a screamer when he was almost murdered atop a boat. Also, can't forget he came back to try and steal Fiona from her diner job, family and boyfriend after ghosting for a year. A true keeper.

Just because he was hot and read books does not mean he was a teenage dream. In many ways, Jess was a real nightmare. He ignored Rory, didn't return calls, and stood her up - often getting away with it because he was a ~*brooding bad boy*~ Also, that terrifying episode where he got really aggressive with Rory when she didn't want to have sex with him?? Begone, demon!!

Great taste, Rory, really. If you weren't team Jess, you were probably team Dean, even though he was a POS in his own right. Possessive, jealous, and a big fat cry baby. Also cheated on his wife with Rory and then tried to blame our sweet Gilmore Girl. GTFO.

Great doctor, terrible boyfriend. Married Callie days after the death of his father only to cheat on her with Izzie. Slept with Meredith when she was emotionally not there and then refused to talk to her. Oh Georgie, relationships just weren't your thing.

9. Lucas Scott from One Tree Hill

Ugh, our problematic fav. Of course, there's lots to love about Lucas Scott but he was also tons of trouble. He cheated on his girlfriend Brooke with her best friend Peyton, and then got engaged to an entirely different girl - while he was still writing books about how much he STILL loved Peyton. C'mon, buddy.

Maybe it's the moody author complex, but Dan was always about himself and his insecurities. Whether he was with Serena, Blair or Vanessa, he was constantly causing emotional, mental and societal issues. Let's also not forget he wrote some pretty messed up stuff as Gossip Girl WHILE he was dating these ladies?? Ugh.

A true nightmare if you ask me. He creepily filmed underage girls for "research" and willingly dated his student, who was a minor....

12. Jason Wahler from The Hills

No, this isn't a character per say but anyone who makes/pressures Lauren Conrad to turn down a summer internship in Paris is a DOUCHE. FK this guy.

13. Justin Bobby from The Hills

Christ almighty Justin Bobby was a tropical storm. He was hot, dirty and super mysterious but also a huge trash bag to Audrina. Short with her, ditched her a lot and treated her like she was disposable. If only you weren't so strangely appealing.

14. Spencer Pratt from The Hills

Spencer was a very scary TV BF for Heidi Montag. He was controlling, manipulative and didn't like it when Heidi had interests outside himself. IRL, Pratt is just as scary but now not on TV so the threat is not as real.

Few BFs were ever as terrifying as Volchok. He was aggressive, rude, and had a very big dirt-bag-chic vibe going for him. He did a lot of drugs, got into a lot of fights, and ultimately is responsible for killing Marissa Cooper. Never forget.