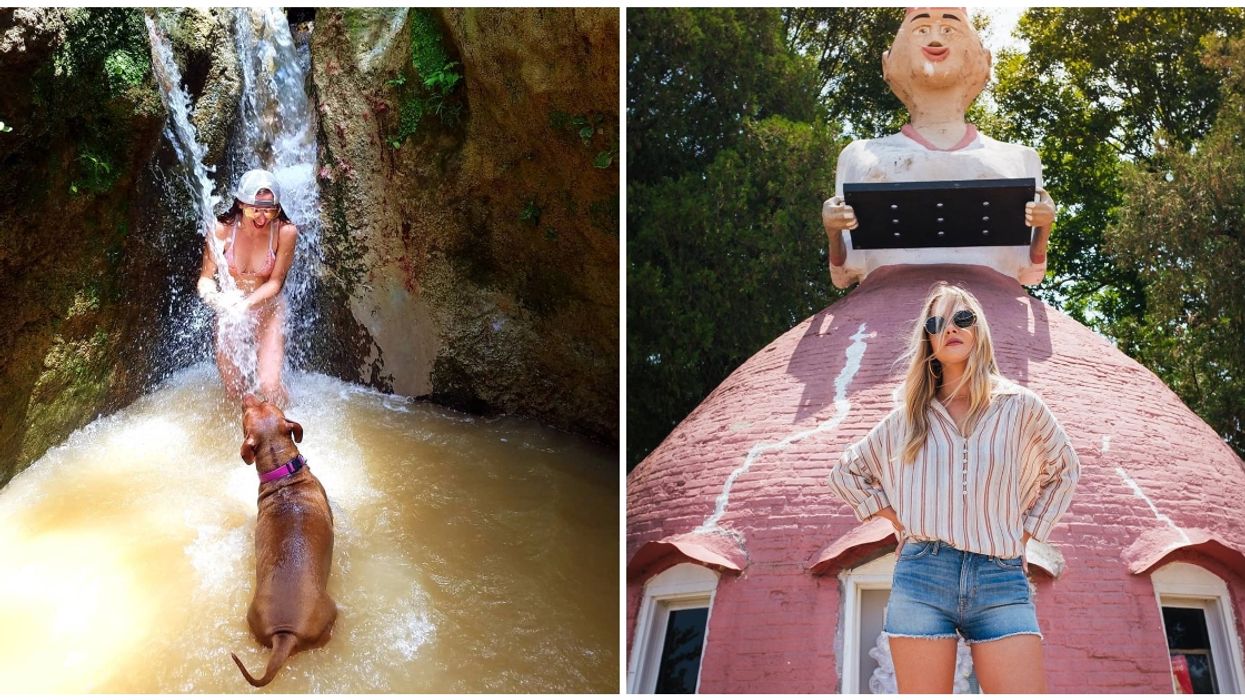 The Magnolia State is more than just beautiful, it's full of unique destinations and hidden gems. But we don't expect you to just take our word for it; from a racially troublesome eatery to an artificial hill used for spiritual worshiping and everything strange and fascinating in between. It does not matter if you are a long-time resident, new arrival, or just visiting, there are definitely some surreal places on this list you never knew existed - and undoubtedly will want to check out ASAP! Although it may not look like much at first glance, the Mississippi River Basin Model is a spectacular replica created by prisoners of war in the 1940's. What makes this model so special is that is it the largest small-scale model ever built, spanning a whopping 8-miles! Although started in the 40's, the project took over 20 years before reaching total completion, and for many years it served the Army Corps well before computer simulation and modeling rendered physical scaling outdated.

The area has since been left abandoned and overgrown but that doesn't stop spectators from admiring the hard work and dedication of the men who persevered to create the largest model of its kind known to man.

There is a reason why petrified wood is the official state rock of MS, and here at the Mississippi Petrified Forest you can take a journey back to 36 million years ago and see the ancient fossilized wood waiting to be discovered. This is the only petrified wood forest in the Southeast and features monstrous versions of some of today's trees as well as extinct species you won't see in this condition anywhere else. Once the location of a rich plantation owners' mansion, the only thing left standing here today are these impressively massive pillars. The four-story mansion was built in the 1800's on a 2,600-acre plantation to be the home of Smith Coffee Daniell II, but he only lived in it for a few short weeks after completion before he passed. His estate was then passed to his heirs and quickly became a focal point of the town.

The plantation was even used during the Civil War by both the Union and Confederate armies, and after the war, Mark Twain used the cupola to observe the Mississippi River and write about it in his memoir. Unfortunately, the expensive mansion was relatively short-lived after a fire destroyed nearly every part of it in 1890. The ruins remain as a historic landmark and are still enjoyed by sightseers today. If you did not guess by the photo, here is the racially troublesome eatery you have been wondering about. Mammy's Cupboard was built in the 1940's and was painted with much darker skin than what is shown today. It was built to be nothing more than a money maker capitalizing on a character representation of "mammy" from Gone With The Wind.

After the Civil Rights Movement in the 60's the owners were pressured to change the skin color of the maid so it wasn't as offensive, but for many, the damage was already done. Regardless of the public disapproval the eatery has remained open and operating, still serving food, dessert and even features a gift shop. This isn't a hidden tropical oasis in the Amazon Jungle, it's a well-loved swimming hole at the Clark Creek Natural Area featuring waterfalls, caves, and refreshingly cool water. This amazing spot is open all year round and completely free to visit, so next time you want to go for a dip make this nature area the top destination on your list - at very least you can get some dope photos. No need to travel to a western town to experience authentic old-American culture when the Shack Up Inn is so close to home. With everything from live Blues performances to the several onsite buildings complete with rustic decor inside and out, the Shack Up Inn lives up to their slogan "the ritz we ain't," and they do not disappoint. Far beyond what meets the eye, the story behind the Clarksdale Crossroads is nothing short of superstition and speculation. Legend has it that this is the very spot where famous Blues singer Robert Johnson made a deal with the devil for talent and fame in exchange for his soul. The rumor has become so locally famous that The Crossroads was named in reference to it, and the guitars - well, they speak for themselves. Whether you're a believer or not, it's a pretty cool spot to check out, and maybe you'll be offered a deal you just can't turn down. Need some shoes from the 60's still in their original box? What about an antique beekeeping kit? This store is full of vintage items dating back as far as the when the shop first opened, in 1884. Much of the building has been kept in near-original condition, so when you browse the shelves you will feel like you have stepped back nearly 100 years ago. On another note, when your store has been around for as long as the Simmons-Wright Company Store, you know business must be pretty good. This dream-come-true plant nursery has every type of Bonsai you could ever imagine, and more! We're talking over 20 greenhouses full of 'em, so put the over-priced unloved grocery store Bonsai down and get your booty to the Bonsai specialists for the designer mini-tree you've been waiting for. A fort surrounded by blue water and white sand offers spectators an unmatched day-at-the-beach experience. Besides the beautiful surroundings, Fort Massessachuttes itself is pretty impressive as it was built after the War of 1812, managing to withstand centuries of hurricanes and remaining in pretty immaculate condition. They just don't make things like they used to, eh? Once the home of award-winning literature author William Faulkner, his beloved estate was known for being overgrown and unkempt - just the way he wanted it. When he and his wife bought the property in 1930 he fell in love with the foliage, vowing to keep it as natural as possible.

He said that the wildly growing grounds helped keep him inspired during times of writing. After his passing, the property was sold to the University of Mississippi who keeps it open for public enjoyment - just as untamed as it was when Faulkner possessed it. It's pretty safe to assume he would be proud. This isn't a real-life replica of Candyland, this is a photo of the eccentric, colorful, flamboyant Margaret's Grocery and Market. As the name suggests, the building started out as a shop, but after the death of her husband (who was shot in the building) Margaret found love with a Reverend, who slowly started turning it into his vision of "Heaven."

With some dedication and faith, the once-morbid shop was turned into a place of worship for the Reverend and, well, anyone who wanted to partake in his sermons. After his death in 2012, the building fell in despair but was recently given to The Mississippi Folk Art Foundation who plans on restoring it. If there is one thing Mississippi can be proud of, it's Elvis Presley. Unbelievably, The King was born in this little 2-room shotgun shack built by the hands of Vernon Presley. Not more than a few years after his birth the home was repossessed by the bank for debts. Once a child of poverty, no one could have imagined the luxurious life Elvis grew up to have. The home has since been restored to the same way it was when it was owned by the Presleys and is a hotspot for tourists and fans alike. This seemingly misplaced mound was actually an intentional feat designed by the indigenous Plaquemine tribe. Although the exact date of construction is unknown, archaeologists believe it to have been created anytime between the 1200's to the 1700's. The only thing that they are certain of about the hill is that animal bones and ceramics were excavated here, leading them to assume it was used for some sort of ancient ritual or ceremony. Grave of the Confederate Camel

Horses, donkeys, and mules were often used during the Civil War, but camels were pretty unheard of - except Douglas, the Confederate Camel. In fact, he was such a hit with his division that after he was killed by a Union sharpshooter after wandering away from camp, they insisted the mammal have a grave among the other Confederate soldiers to be remembered for his brave and loyal service during the war. United States of America
Discover Narcity
Get the latest and greatest stories every day in your inbox.