Spoiler alert: article contains information on where to mine diamonds 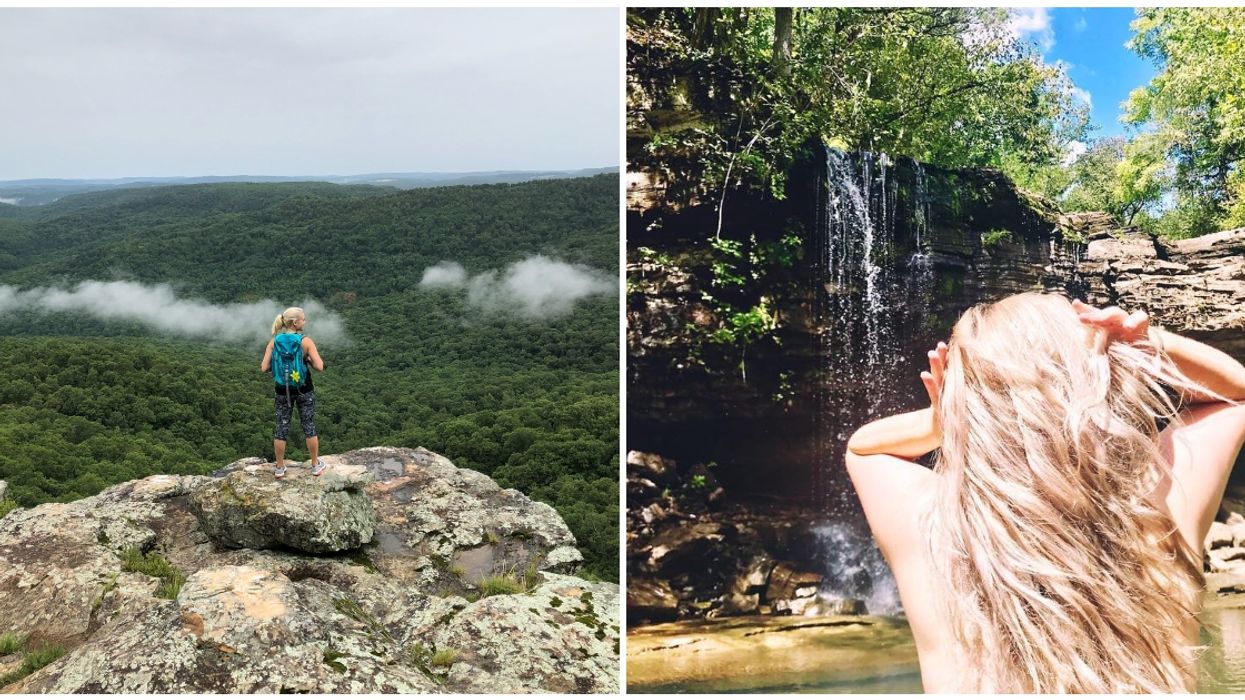 Arkansas is an amazing state that often gets overlooked but with the state's vast history coupled by the millions of acres worth of really cool recreational spots, there's really no reason why this amazing location on the map shouldn't be on everyone's travel bucket list.

No matter if you are a long-time resident, visitor, or far away and your curiosity lead you to click on this article, after seeing the surreal places on this list you will surely want to be booking your travel arrangements to see everything this vast state has to offer. There are thousands of impressive churches, cathedrals, and houses of worship found everywhere in the world but the Thorncrown Chapel is easily one of the most unique. This mostly see-through church was built in 1980 by an apprentice of Frank Lloyd Wright (overseer of the architectural design of Falling Water), E. Fay Jones. Judging by the design and craftsmanship of Jones' church, we think it's pretty safe to assume Wright was a good mentor. And yes, it looks just as cool from the inside. Plain on the outside, shimmering on the inside. The Ozark Diamond Mine is the only precious gem mine where you can keep what you find - including, yes, diamonds. Visitors to the park search a 37-acre plowed field, the eroded surface of a volcanic crater, for a variety of rocks, minerals, and gemstones such as Amethyst, garnet, jasper, agate, quartz – and any rock or mineral you find is yours to keep. If that's not enough incentive to get you diggin', maybe the fact that a 40-carat diamond (the largest ever unearthed on American soil) was found here. This makes gold panning seem like it's for kids. Airplane food is never really known for being palatable, but The Parachute Inn is challenging the stereotype, and we have to admit they have been doing a pretty good job. This restaurant definitely stands out as one of the most unique eateries in the state. I mean, how often can you say you were served a gourmet meal in a plane? While it may not look like much of a castle, this strange stone dwelling is surrounded with one-of-a-kind artwork on the inside and out and is often referred to as “The Ozarks’ Strangest Dwelling." The home is filled with nature-themed displays including trees that grow inside, while the outside has many of Mrs. Quigley's glass bottle and stone sculptures. Despite not being a "castle" this house is still surely as spectacular as one. Perhaps one of the most distinctive waterfalls in the entire Ozark–St. Francis National Forest is the Short Grotto Falls. Water pours from the rocks above, making for a truly spectacular view from below. There is plenty of paranormal folklore in Arkansas to keep you guessing about the world of unexplained phenomenon, but the Gurdon Light is a mystery of its own. For years a light, now known as the Gurdon Light, has been shining through trees at night baffling those who witness it. The possibility of car headlights has been ruled out because there are no roads in the area the light emanates from, so spectators have been left to their imagination to decide what causes the light. Everything from UFOs to ghosts and even some scientific explanations continue to float around, but as of this moment, the true explanation has yet to be uncovered. It's totally cool if a plane themed restaurant doesn't float your boat because Dondie's White River Princess definitely will. Here you can order your favorite seafood dishes or fill up on the buffet of comfort food, but between you and me no matter what your main course is, be sure to leave room for one of their delicious desserts. Oh, and did I mention the beautiful river views? This medieval-style fortress has been a project in the making for many years, but construction was halted a few years ago for an unspecified amount of time until a new buyer or investor comes along to help fund it. What makes this spot unique is that it was constructed to be an accurate replica of a 13th-century French castle using only materials and techniques appropriate to the 13th-century. Visitors were allowed to visit the spot during construction to watch and learn about the process. The project was expected to take around 20 years to complete, but it appears it may take much longer at this rate. If you have a thing for animatronic singing fish then boy does Arkansas have the place for you! The Billy Bass Adoption Center is actually located inside the Flying Fish restaurant in Little Rock, so while you are eating your basket of catfish you can admire the iconic turn-of-the-century singing bass gag gift that your grandma definitely had hanging in the living room. Arkansas has some of the most beautiful scenery in all of the USA, and Magazine Mountain is a perfect example. Not only does the mountain boast the natural highest point of the entire state, but there is also a man-made observation tower offering adventurers some one-of-a-kind views of the surrounding area. Have you ever seen a place that looked so whimsical yet so peaceful? We haven't until now. Wattle Hollow Retreat offers a truly unique cabin-in-the-woods experience with yoga, vipassana meditation and dance, and composting toilets. During your visit, you will be expected to dine on compost-friendly menu options (aka vegetarian) so the surrounding wildlife can enjoy whatever you don't. Some places are known for their great scenery, others for their history, the town of Toad Suck though, is known for nothing more than the name. People travel from all over the nation to visit the strangely named town and to pose with the signpost; in fact, Toad Suck has become such a notorious tourist attraction that every year the local community hosts an annual Toad Suck Daze fair. As you can imagine, toads have become the town's mascot which is very apparent when you tour the streets and business district. This park may not look like much more than an open field, but if there is one thing we have learned from some of the other places on this list, there is so much more than what meets the eye. Here at Parkin Archeological State Park, one of the most significant indigenous civilization archeological discoveries were - and continue to be - made here. Much like a 13th-century French castle, you don't often see exotic oriental structures like the H.U. Lee International Gate and Garden every day in America - unless you're in Arkansas of course. While some people may confuse the building for being Chinese or Japanese, according to the official website it is actually a South Korean gate and garden, containing foliage, symbolic statues and structures with the sole purpose to educate visitors about the late Haeng Ung Lee’s (Eternal Grand Master H.U. Lee) contributions to society, the country of South Korea and the Songahm Taekwondo style developed by Eternal Grand Master Lee. Acres of nature, trails for as far as your feet will take you, and crystal clear springs all in one location. As the name suggests, Hot Springs State Park has several thermal pools in which you can see and touch, making them the usual highlight of the visit, but did we mention the enchanting Christmas light display that you can only enjoy seasonally?

One of America's most beloved and timeless bands remains immortalized in a small Arkansas town. The story behind the seemingly misplaced park is actually pretty groovy; in September of 1964 the band members were traveling through Arkansas while on tour and although their arrival and departure was to remain a secret, word got around and nearly the entire town showed up at the airport to catch a glimpse of the rockstars. The event was such a big deal for the usually-uneventful little town that a park, complete with murals, sculptures, cut-outs, and more, was created. To this day the park remains a top tourist destination and a Beatles Fest is hosted here every September.