The battle of Alberta is just getting started! 🏒 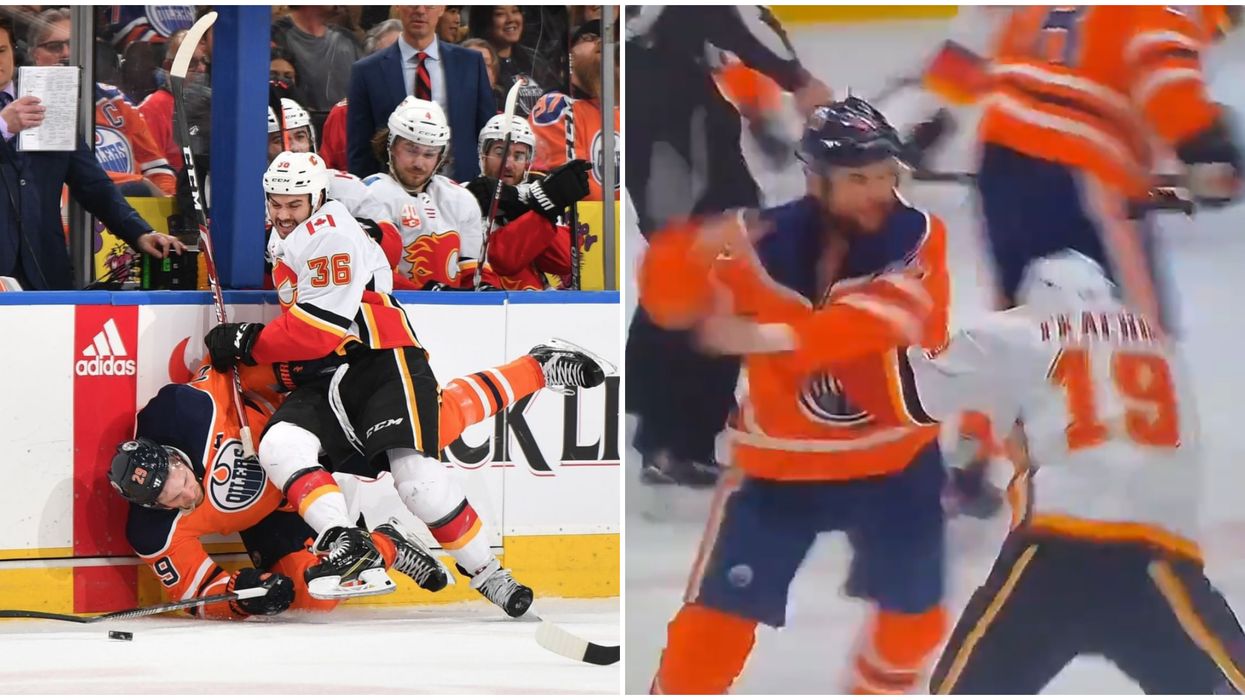 Last night's game was wild, to say the least. On the evening of January 29, the Calgary Flames and Edmonton Oilers faced off for an infamous Battle of Alberta in Edmonton at the Rogers Arena. The two Albertan NHL teams have had a notable rivalry for years and this season has been no exception. In fact, this year has been even spicier than usual thanks to some bad blood and a whole lot of scrappiness.

The Calgary Flames ended up winning last night's game 4-3 after nail-biting overtime and a shoot out. It was a tense and dramatic game from start to finish.

Part of the tension can be attributed to the closeness of the game, but a whole lot of extra drama was added with fights, rough play, and some serious sass.

As you may know, the Flames' Matthew Tkachuk and the Oilers' Zack Kassian have quite the beef, as seen in their wild fight earlier this month.

Tkachuk has also got his differences with the Oilers' Leon Draisaitl who actually refused to get on the ice with him during the all-star game this week.

If you're sensing a trend, you're not wrong. Tkachuk is known for his scrappy behaviour and for running his mouth on the ice.

He's so disliked be the Oilers and their fans that the stadium erupted with boos when he stepped on the ice last night.

Some extra, unexpected drama came about as well — don't you worry, we've got the tea.

Here are some of the many dramatic moments from the January 29 Battle of Alberta that you need to see for yourself.

The Tkachuk Vs. Kassian Throwdown

We're not going to go in chronological order here because you need to see this right now. It was bound to happen. We all saw it coming, yet somehow it was still both shocking and invigorating to watch.

While waiting for the puck to drop, we see the two exchange a few words, Tkachuk obviously saying "let's go." Before the whistle sounds, Tkachuk has already got one of his gloves off and the second the puck hits the ice they are in a full fight.

Immediately after Kassian and Tkachuk are broken up, they are sent off the ice for penalties.

As Kassian walks by the Flames' bench we see Calgary's Zac Rinaldo saying "I'm next" to the Oiler, indicating that he'll be the next to drop the gloves with him. An intense and threatening move. Though, we didn't see the two players fight this time around.

Ladies, find yourself a man that stares at you like Kassian stares at Tkachuck. 👀 #BattleOfAlberta #CGYvsEDM #NHL https://t.co/Cn6NuoBZyk
— Cat Spencer (@Cat Spencer)1580357439.0

This intense look will give you chills. The post's caption says it all. "Ladies, find yourself a man that stares at you like Kassian stares at Tkachuck."

Before the expected fight between the two rivals, an unexpected Sean Monahan threw down in the first fight of his NHL career. His fight was with Ryan Nugent-Hopkins and took place right in the first period.

After Connor McDavid was clipped by Mark Giordano of the Flames, he was sent spinning, though he didn't fall down.

The Edmonton player and many of his team's fans believe it should have been a penalty for Giordano as it looked like it could have been a knee. When the penalty was not called, McDavid lashed back hard from the bench and even snapped his stick.

His reaction may be because he recently recovered from a horrible knee injury that actually involved Mark Giordano. Too soon, Giordano.

Calgary Flames' goalie, David Rittich, had an especially theatrical celebration when he made the game-winning save during the shoot out and it's a total must-see.

Though this may not be one specific occurrence, it's worth mentioning because last night's game was filled with violent checking.

The bad blood between the two teams was clear from start to finish and they were committed to finishing their checks even when the puck was long gone.

What a wild ride. The next Battle of Alberta is on Saturday, February 1 and you should probably be watching.