The ultimate guide to critically-acclaimed television. 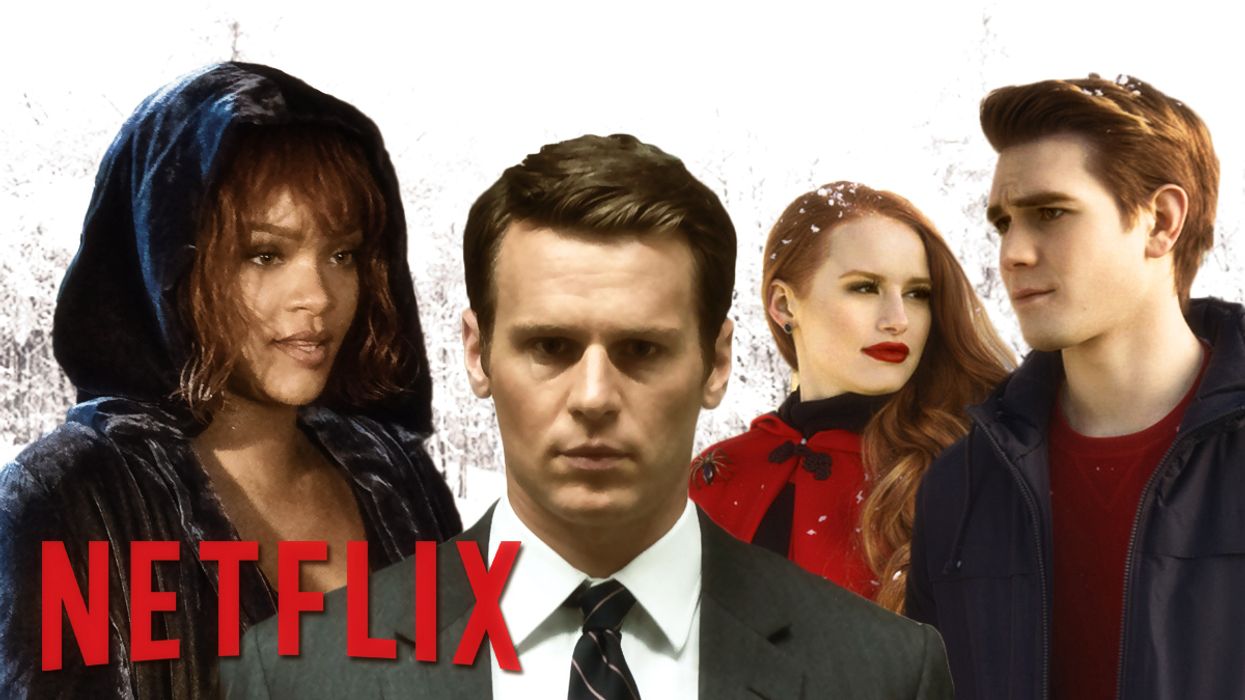 In this age of digital streaming and instant access, it's easy to get through an entire television series from start to finish in seemingly no time at all. This has led to the development of a common first-world problem that almost everyone today faces - not having a show to watch.

Luckily for you, I've narrowed down some of the best TV series currently available on Netflix Canada so you can keep on binge-watching. The titles featured in this article have all received overall scores of 80% to 100% on Rotten Tomatoes, a credible source for movie and television reviews.

Of course, like any form of art, television is subjective and everyone has their own tastes and opinions. But it's always nice to know which shows have made a good impact on general audiences and critics. Here are 72 critically-acclaimed TV series you can watch on Netflix Canada, sorted by genre:

READ ALSO: 70 Movies You Can Watch On Netflix Canada That Got 90-100% On Rotten Tomatoes

"In a grimy near-future, 20-year-olds stream to a sleek testing facility to compete for a spot in an idyllic land known as the Offshore."

"From the creators of 'The Matrix' and 'Babylon 5' comes this tense series in which eight people can telepathically experience each other's lives."

"After turning himself in, a brilliant fugitive offers to help the FBI bag other baddies, but only if rookie profiler Elizabeth Keen is his partner."

"In the wake of a zombie apocalypse, survivors hold on to the hope of humanity by banding together to wage a fight for their own survival."

"When evidence in a deadly terrorist attack implicates FBI trainee Alex Parrish, she must discover which one of her classmates framed her."

"Long before he was commissioner, rookie cop James Gordon takes on Gotham City crime and corruption to avenge the murder of Bruce Wayne's parents."

"The outcast descendant of lawman Wyatt Earp teams up with an immortal Doc Holliday to rid the world of demonic revenants from the Wild West. "

"Each season of this action thriller follows 24 hours in the life of Jack Bauer, a special agent who works to thwart terrorist attacks."

"A century after Earth was devastated by a nuclear apocalypse, 100 space station residents are sent to the planet to determine whether it's habitable."

"When LA is invaded by outside forces and becomes a walled-in settlement, a former FBI agentand his wife risk everything to find their lost son."

"Haunted by a traumatic past, Jessica Jones uses her gifts as a private eye to find her tormentor before he can harm anyone else in Hell's Kitchen."

"As Alfred the Great defends his kingdom from Norse invaders, Uhtred -- born a Saxon but raised by Vikings -- seeks to claim his ancestral birthright."

"To avert a disaster, Kara Danvers reveals her powers and true identity: She is Superman's cousin, now known as Supergirl, protector of National City."

"A hoodie-wearing, unbreakable ex-con fights to clear his name and save his neighborhood. He wasn't looking for a fight, but the people need a hero."

"Blinded as a young boy, Matt Murdock fights injustice by day as a lawyer and by night as the Super Hero Daredevil in Hell's Kitchen, New York City."

"They're not friends, but when their husbands leave them for each other, proper Grace and eccentric Frankie begin to bond in this Emmy-nominated series."

"It's the Emmy-winning story of a wealthy family that lost everything, and the one son who had no choice but to keep them all together."

"After moving to New York, June is swindled by her roommate, Chloe. Much to Chloe's surprise, June turns the tables, and a beautiful friendship begins."

"After being dishonorably discharged from the Navy Seals, Bob and David are back serving our country the way they do best -- making sketch comedy."

"Meet the most beloved sitcom horse of the '90s, 20 years later. He's a curmudgeon with a heart of...not quite gold...but something like gold."

"A privileged New Yorker ends up in a women's prison when a past crime catches up with her in this Emmy-winning series from the creator of 'Weeds.'"

"In 1980s LA, a crew of misfits reinvent themselves as the Gorgeous Ladies of Wrestling. A comedy by the team behind 'Orange Is the New Black.'"

"Due to an error, self-absorbed Eleanor Shellstrop arrives at the Good Place after her death. Determined to stay, she tries to become a better person."

"In a reimagining of the TV classic, a newly single Latina mother raises her teen daughter and tween son with the "help" of her old-school mom."

"A high school is rocked by an act of vandalism, but the top suspect pleads innocence and finds an ally in a filmmaker. A satirical true crime mystery."

"Comedian Maria Bamford stars in a series inspired by her own life."

"When a woman is rescued from a doomsday cult and lands in New York City, she must navigate a world she didn’t think even existed anymore."

"Teenage friends find their lives upended by the wonders and horrors of puberty in this edgy comedy from real-life pals Nick Kroll and Andrew Goldberg."

"The virginal Tracey, who was raised in a strictly religious Tower Hamlets flat, is ready to realize her potential. And the first step is having sex."

"After vowing to remain chaste until marriage, Jane Villanueva learns she's pregnant due to a medical slip-up and has to rethink her future."

"Dev tries to jump-start his acting career and elevate his dating game with help from his eclectic group of friends in this Emmy-winning series."

"A ruthless politician will stop at nothing to conquer Washington, D.C., in this Emmy and Golden Globe-winning political drama."

"After a teenage girl's perplexing suicide, a classmate receives a series of tapes that unravel the mystery of her tragic choice."

"This drama follows the political rivalries and romance of Queen Elizabeth II's reign and the events that shaped the second half of the 20th century."

"Re-creating the dawn of the personal computer era, this digital drama tracks the fates of an industry visionary and his brilliant colleagues."

"Set in 1960s New York City, this award-winning series takes a peek inside an ad agency during an era when the cutthroat business had a glamorous lure."

"This epic tale adapted from Diana Gabaldon's popular series of fantasy-romance novels focuses on the drama of two time-crossed lovers."

"A notorious gang in 1919 Birmingham, England, is led by the fierce Tommy Shelby, a crime boss set on moving up in the world no matter the cost."

"A powerful team of Washington, D.C. lawyers makes scandals disappear while handling government crises and coping with problems of their own."

"Unemployed Frank Gallagher -- a single father of eight kids -- attempts to keep sane, often with a little help from a bottle."

"A terminally ill chemistry teacher teams with a former student to manufacture crystal meth to secure his family's future."

"In this courtroom drama, attorney Alicia Florrick finds herself forced to return to work after ascandal lands her politician husband in prison."

"Convicted of rape and murder at age 18, Daniel Holden spends nearly 20 years on death row until DNA evidence brings the verdict into question."

"This anthology series unfolds a different story arc for each season, with dramas focusing on aspects ofAmerican life and the criminal justice system."

"Students of color navigate the daily slights and slippery politics of life at an Ivy League college that's not nearly as "post-racial" as it thinks."

"A detective's world begins to unravel as he hunts for his colleague's killer and fields messages from beyond the grave in this gripping police drama."

"A vampire hunter fights to save a besieged city from an army of otherworldly beasts controlled by Dracula himself. Inspired by the classic video games."

"While navigating the troubled waters of sex, romance, school and family, teen Archie and his gang become entangled in a dark Riverdale mystery."

"In a picturesque and once-peaceful province of Sweden, disillusioned police inspector Kurt Wallander probes a shocking spate of baffling murders."

"This drama series focuses on the early years of the relationship between FBI criminal profiler Will Graham and homicidal cannibal Dr. Hannibal Lecter."

"Her marriage just ended and she's returning to work as a London detective after 12 years away. Is the serial killer she once investigated back, too?"

"A dedicated urban detective tries to keep a grip on his personal life while dealing with the psychological factors underlying the crimes he solves."

"A detective superintendent battles her own personal demons as she tries to get inside the head of a serial killer hiding behind a family-man facade."

"When his father dies, Norman Bates and his mother open a hotel. But Norman's precarious mental state drives them down a dark and violent path."

"In this gripping Emmy-nominated miniseries, a baroness trying to forge new ties between Israelis and Palestinians stirs up international intrigue."

"After a young boy is murdered in the small seaside town of Broadchurch, local detectives Ellie Miller and Alec Hardy are assigned the mysterious case."

"Long-lost buddy Zack gets suburban dad Kyle on a bus to a Rebirth seminar, sending him down a rabbit hole of psychodrama, seduction and violence"

"In the late 1970s two FBI agents expand criminal science by delving into the psychology of murder and getting uneasily close to all-too-real monsters."

"Yorkshire police sergeant Catherine Cawood pursues the man who assaulted her late daughter, unaware he is now part of a secret kidnapping plot."

If you are craving some adventure, we got you covered. There are so many fun activities to do near Ottawa that you'll want to try for yourself.

Now that Ontario's border restrictions are over, you can finally treat yourself to a relaxing day at Nordic Spa-Nature or trying to find your way out of an epic water maze.

One salon already has 225 people in line for an appointment!

It has been a long time since anyone in Toronto has been able to treat themselves to a day at the salon. If you've been growing increasingly desperate, wondering when Ontario's nail salons will reopen, you'll be glad to know there's finally a light at the end of the tunnel.

When Ontario moves into step two of its Roadmap to Reopening, personal care services like nail salons will be allowed to reopen at 25% capacity, with a maximum of five people. The current guidelines call for approximately 21 days between each step, and since the province hit step one on June 11, this means you may be able to get a fresh manicure as early as July 2.