Who knew Canada had so many connections to Hollywood! 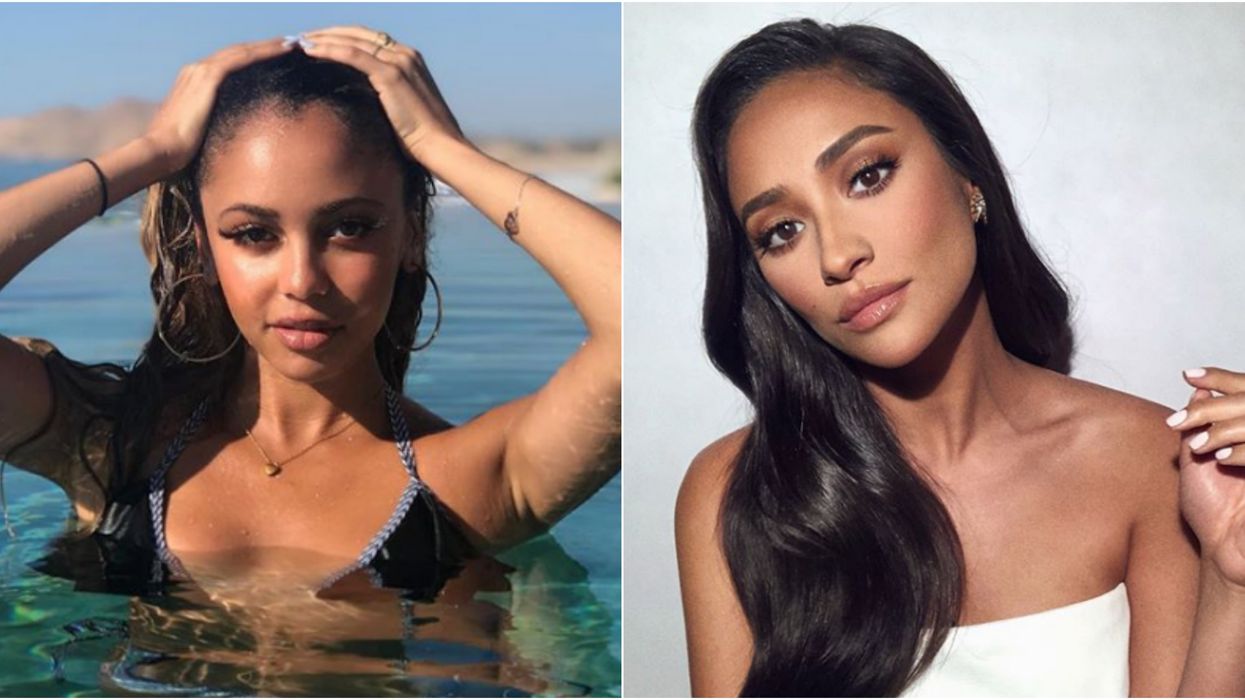 It's not news to anyone that people are absolutely obsessed with Hollywood and all the celebrities that live there. Living in the sunny hills of Los Angeles would be pretty nice compared to the brutally cold winters that Canada experiences.

That's why when any big star references Canada or their Canadian roots, we get really excited about it. There is a common pride that all of Canada's residents share when our country is represented, whether that be the music, film, or television industry. Of course, there are the big name stars that all of us know and love. Celebrities like Drake, Justin Bieber, The Weeknd, the Ryan's (Gosling and Reynolds), plus Avril Lavigne, Nelly Furtado, and Celine Dion are well known Canadians around the globe.

Still, there are plenty of other Hollywood celebs that have crazy connections back to Canada. More big name celebrities have close ties to our home and native land than you think! Canada is known as being a welcoming nation, so it's time to open up our arms and celebrate our fellow citizens! While we knew that Canada was a diverse and talented country, it's clear that our outreach is farther than we think!

So without further ado, here are 25 Hollywood celebs that have some crazy weird connections to Canada! Everyone loves The Rock, but did you know that his father is Canadian? While Johnson made name for himself as a wrestler, his dad, Ata Johnson, from Nova Scotia, was also a famous wrestler. Not only that, The Rock tried to make it in the CFL before being cut and ultimately pursuing wrestling! She was born this way and by that, I mean she's Canadian. Lady Gaga, born Stefani Germanotta, not only found her first #1 in Canada with her hit song "Just Dance," the singer's mother is half French-Canadian. Gaga may have Canadian blood but she proudly displays her Italian hertiage more frequently. While Amanda Bynes has been taking a step back from the spotlight in the past few years due to mental health struggles, her mother has ties to Canada. Lynn Organ, Byne's mother, lived in Toronto earlier in her life and Amanda's maternal grandparents have always been Canadian. That's right! Chandler Bing is actually Canadian. Matthew Perry, known for playing the Friends funny guy, is actually born in Massachusetts but was raised in Ottawa. His mother was a Canadian journalist and Perry actually went on to be the top-ranked junior tennis player in Canada during his youth. Michael Cera is probably the most lovable weirdo on earth, so frankly it makes total sense that he's Canadian. Cera was born in Brampton, Ontario, and regularly attended school in the country until grade 9 before actively pursuing his dream of acting. We're thankful he did follow his dream because Cera's movies like Juno, Superbad, and Nick & Norah's Infinite Playlist still hold up as amazing films to this day. While Cobie Smulders played Canadian journalist Robin Scherbatsky on How I Met Your Mother, the actress is actually Canadian also. Born Jacoba Smulders, the actress grew up in Vancouver, BC. Believe it or not, she didn't even think about becoming an actress until high school but clearly had the talent! Say what you want about Elon Musk but something few people know about the Tesla owner is that he is actually Canadian. Musk's mother was born in Regina, Saskatchewan, and not only is he dating Canadian singer Grimes, but he also holds a Canadian citizenship.

Hillary Duff doesn't necessarily have Canadian heritage but her son Luca Comrie does. Duff's ex-husband and Luca's father is NHL player, Mike Comrie, who was born and raised in Edmonton, Alberta. That means that the youngest Comrie could get his citizenship easily with so many family members up north! While most people know Tristan Thompson for being the father of Khloe Kardashian's child and the focus of their cheating scandal earlier this year, many don't know that Thompson is actually from Canada. The Toronto native now lives in Cleaveland but has his family, like his mother, still living up north in the six. Not only did Sandra Oh wow us as Christina Yang on Grey's Anatomy, it shocked us to find out that she's also a Canadian. Oh is actually a first-generation Canadian born to Korean parents in Ottawa, Ontario. While Shay Mitchell stole our hearts as Emily in Pretty Little Liars, the actress is also born and raised in Canada! Mitchell is actually a Torontonian and regularly shares her love for Canada all over social media.

Not just one Friends actor, but two are Canadian! You read that right, Matt LeBlanc is ALSO Canadian, as his father is French-Canadian. If you swore that LeBlanc was as Italian as Joey Tribbiani, you're not wrong because his mother is Italian. While Vanessa Morgan has been making a name for herself on the hit series Riverdale, many Canadians will remember her as Amanda Pierce on the Family channel show The Latest Buzz. Morgan may be all grown up now but she still hasn't distanced herself from her Ottawa, Ontario upbringing. Most people remember Paula Abdul for her 1980's hit songs or for being the nice judge on prime-time American Idol. Yet few know that Abdul actually has family connections to Canada, as her mother was born here and both her parents lived in the country for a short period of time. While everyone remembers Hayden Christensen for his portrayal of Anakin Skywalker in Star Wars episodes two and three, many do not know that this actor is actually born in Vancouver, BC. Christensen's parents work in the communications business and actually moved the actor to Markham, Ontario before his career took off. Not only that, Christensen recently filmed and premiered a romantic comedy called Little Italy in Toronto with Emma Roberts! Like Hillary Duff and Elton John, Carrie Underwood isn't directly a Canadian but she is married to one. Underwood's husband Mike Fisher was born in Peterborough, Ontario and has been with the singer for 10 years as of 2018. The couple shares a son named Isaiah already and recently announced that they are expecting a second child currently.

From Regina George to Detective Ani Bezzerides, Rachel McAdams is an incredible actress and a proud Canadian. McAdams is a born and raised Torontonian, even attending York University in the city before hitting it big in Hollywood. Madonna is known for her chart-topping songs, kissing Britney Spears at the 2003 MTV Music Awards, and ever-evolving style, but did you know she has Canadian heritage? The 60-year old was actually born Madonna Louise Ciccone and her mother, also named Madonna, was French-Canadian. Most people know Dame Maggie Smith as Professor McGonagall in the Harry Potter franchise but did you know she worked as an actor in one of Canada's most well-known theatre companies? The Dame worked at the Stratford Festival Theatre in Stratford, Ontario for four summer seasons between 1976-1980. Believe it or not, Angelina Jolie is actually French-Canadian. Her mother, Marcheline Bertrand, has French-Canadian heritage, while her father, Jon Voight, is German and Slovak.

Known for playing the independent woman Samantha Jones on Sex In The City, it makes us proud to say that Kim Cattrall is among all of us who identify as Canadians. Cattrall was actually born in Liverpool, England before immigrating to Vancouver Island with her family as a baby. She bounced back and forth between the countries before moving to New York permanently at the age of 16. She still resides in the city but also maintains citizenship in both Canada and England. Most people know Jay Baruchel for playing Kirk in She's Out Of My League or for portraying himself in the Seth Rogan and James Franco comedy This Is The End, but did you know he is also Canadian? Baruchel was born in Ottawa, Ontario but grew up in Montreal, Quebec. The actor recently got married and is known for living locally in Canada. Baruchel is seen regularly around Montreal where he lives but is also spotted around Toronto regularly. While Elton John doesn't share any Canadian heritage his husband David Furnish is actually a Toronto native. The singer was spotted around Toronto recently shopping for records while resting before some Canadian stops of his farewell tour. The couple share twins, Elijah and Zachary, and are also rumoured to have a house in Caledon, Ontario, where they spend vacation time.

This one was truly surprising! The man behind the classic Disney movies like Cinderella and Peter Pan is also actually connected to Canada. Walt Disney's father, Elias Disney, was actually a Canadian-born farmer.