Police even had to ask residents not to gather around it! 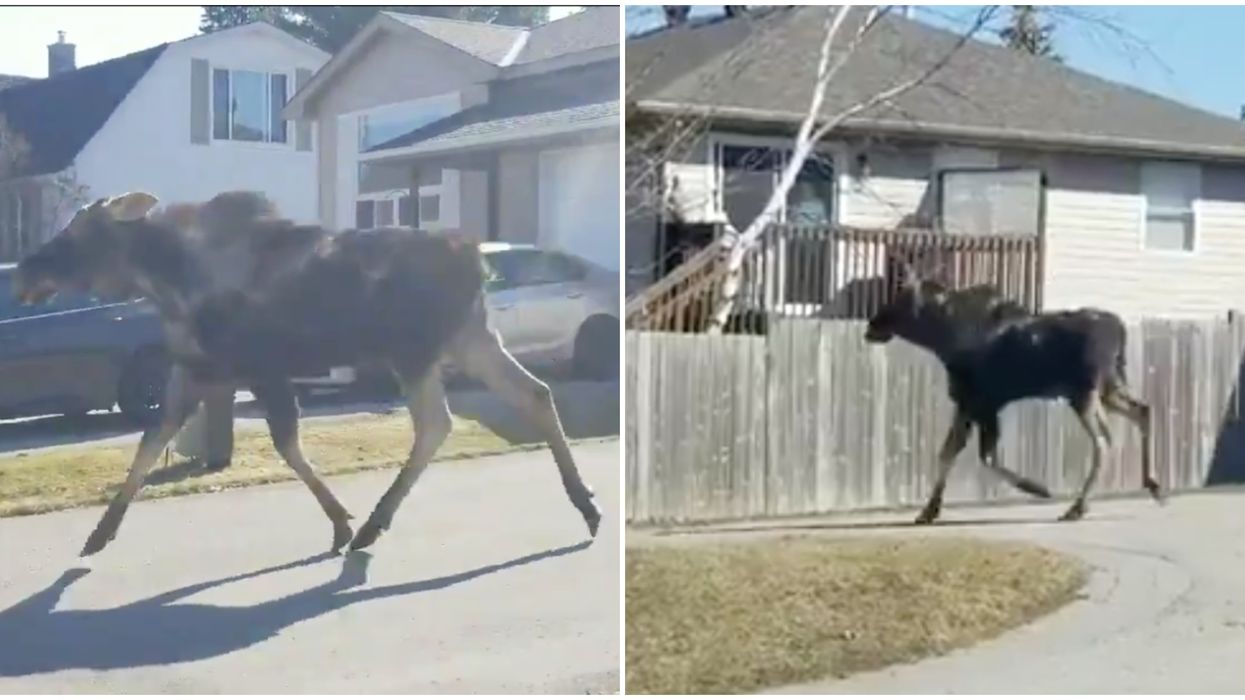 A welcome distraction or just a moose-ance? One Ontario city has been enjoying a pretty Canadian adventure over the last three days. That's because there's been a moose loose in Orillia and it certainly seems to have brightened up residents' dull days.

Provincial nature has been out in full bloom in recent weeks with many of Ontario's residents off the streets on a daily basis right now.

And now a moose on the loose has captured imaginations in the city of Orillia in central Ontario.

Orillia OPP shared a video of the animal wandering through yards and across driveways in the Park Street area of the quiet city on Monday, April 6.

"North end in the #CityofOrillia. Please give the moose some space so it can find a way back to the forest. #OrilliaCares about moose!" reads the tweet.

And it turns out this is just the latest chapter in the saga.

Orillia OPP had issued an advisory back on Saturday, April 4 about a moose on the loose.

"I am fairly certain it’s the same moose as other Facebook posts the moose looks similar," Martin Hill, an Orillia OPP spokesperson, told Narcity by email on Monday.

Moose on the loose in the #CityofOrillia. The @ONresources are on their way. Please don't gather in groups to see… https://t.co/jM8q2jIJ3e
— OPP Central Region (@OPP Central Region)1586184510.0

The moose is thought to pose no real harm (although we certainly wouldn't challenge it to a fight) and residents have been asked to stay indoors and avoid approaching the animal, both for its own sake and for the purposes of social distancing.

According to OrilliaMatters, a moose was first spotted in the area of Old Muskoka Road heading towards the Couchiching Golf Course area on Saturday in the early morning hours.

The next day, on April 5, a resident was also able to capture video of the animal and spoke with Simcoe.com about the encounter.

"I thought it was a horse walking down the street. I heard a clicking noise, like a horse (walking)," said Roberto Langiano, a resident in the area, via Simcoe.com.

Not something you see everyday. Moose literally on the loose in orillia. Video to come tomorrow @CTVBarrieNews… https://t.co/p2m8VU037d
— Connor Earl (@Connor Earl)1586133101.0

As people continue to stay indoors and practice social distancing, it seems like more and more animals are gaining the confidence to roam the streets of Canadian towns.

Just a few days ago, another moose in Alberta was captured on video enjoying the deserted streets.

The same goes for Toronto streets after deers, coyotes and foxes have been seen roaming certain areas across the 6ix recently.

If Orillia OPP isn't careful, it will soon be rivalling York Regional Police for the title of best unexpected animal content.

For what it's worth, Hill says the moose hasn't been aggressive and is likely simply frightened.

We feel that, to be honest.

So, there you have it. Whether you find it amoosing or frightening, it seems the animals are taking over.

As for the name of Orillia's bold new resident? For now, it is remaining anonymoose.