We don't know if he's joking. 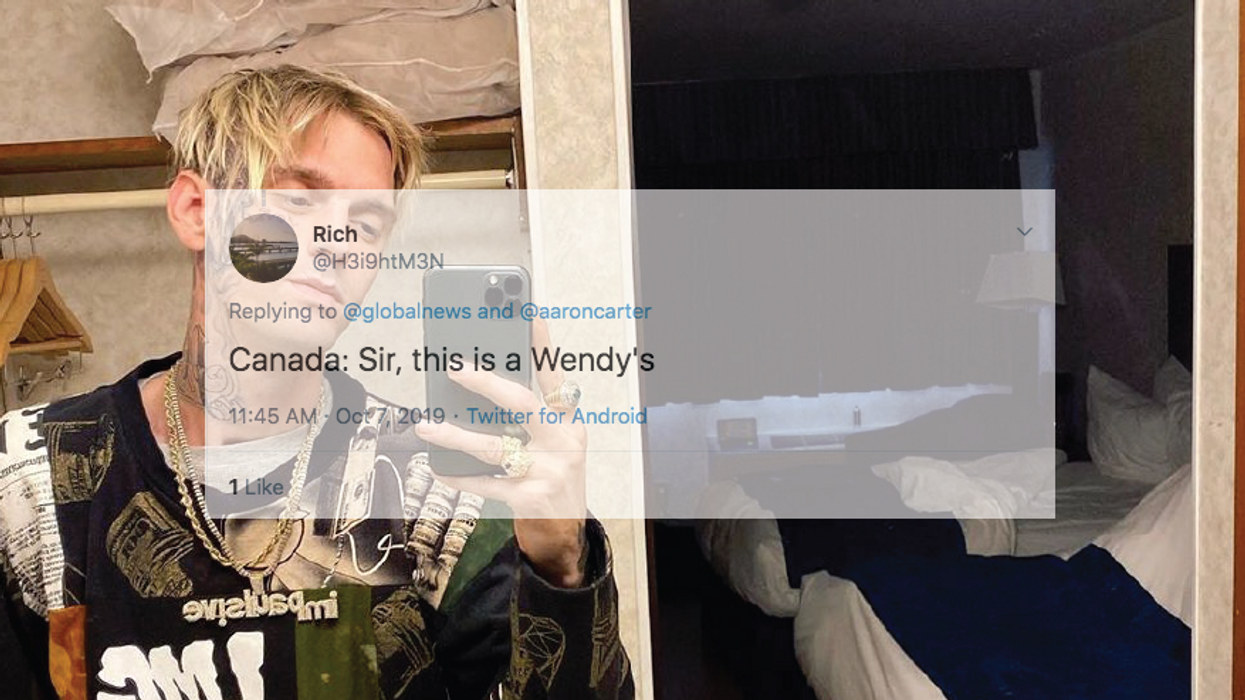 Aaron Carter doesn't just want candy anymore (you know the song), but he wants to move to Canada. Specifically, Nova Scotia or the Northwest Territories. It's hard to tell. In a thread of deleted tweets, Carter mentioned that he had a "big announcement" and proceeded to explain to his 631k followers that he was moving to the North Pole, aka Canada. But is Aaron Carter really moving to Canada? Residents here have very mixed reviews.

While you can't really blame him for wanting to move to Canada, no one can really tell if he's serious or not. In the deleted announcement tweet, he said, "Ok guys I have a BIG announcement, I Found my new home and I'm starting the process on buying this home tomorrow #WeAreTheNorth I'm in the North Pole now! you can't find me now! #GoodByeAmerica #NorthWestTerritories."

He even went as far as changing his location on Twitter to Canada, along with the Canadian flag emoji. While we're not 100% sure if this is true or not, he went on to explain his decision to move.

In the tweet, he claims he's "about to get a rental car and drive a few hours to see my new home" and says his brother-in-law lives there. He also said Nova Scotia is his "favourite place in the world" because it "makes for shorter flights to Europe". Although Carter may not know how expensive it is to fly from Canada to Europe.

In an Instagram photo posted a couple of hours ago, Carter can be seen in a hotel room and his caption is about moving, touring, and finding "his future wife." He wrote, "Today is that day!! 🏡 changing my whole lifestyle. Getting away from all the crap. Making my music and living my life in peace waiting for my future wife to find me or I find her. #NovaScotia #WeAreTheNorth PREPPING MY MIND BODY AND SOUL FOR OVER 200 shows next year 😈 buss downs on their way @sunythejeweler Two two be ExACT 💎 💎💎💎💎💎💎💎💎💎💎"

This drastic change that Aaron wants to make is getting a lot of attention from Canadians. After he revealed his decision to move to Nova Scotia, he got a lot of feedback.

Some fans are encouraging him to make the move. One fan said, "@aaroncarter is moving to Canada... & 7 year old me is screaming" with a heart eye emoji. Another fan replied and said, "Wow Dude!! ACTUALLY becoming a fan !! Good Luck & Welcome to #Canada Be Well !! Choose Happy!!"

However, there are also fans who don't want him in Canada at all. One user claims "your split second life decisions like your new tattoo and moving to Canada are slightly worrying" while another said, "Sorry to tell you this, but if @aaroncarter ends up actually moving there then it can no longer be considered the "Hollywood of Canada." Now, the "Skid Row of Canada" yeah maybe..."

@aaroncarter We Canadians welcome everyone with open arms but your split second life decisions like your new tattoo… https://t.co/mWG5p1g2np
— Toy (@Toy)1570460915.0

Lastly, there are a lot of people telling him he can't just move here as he needs a Visa, there are immigration laws, and that it may be hard since he has criminal charges. However, you can read below the best tweet out of all of them. It reads in response to his tweets, "Canada: Sir, this is a Wendy's".