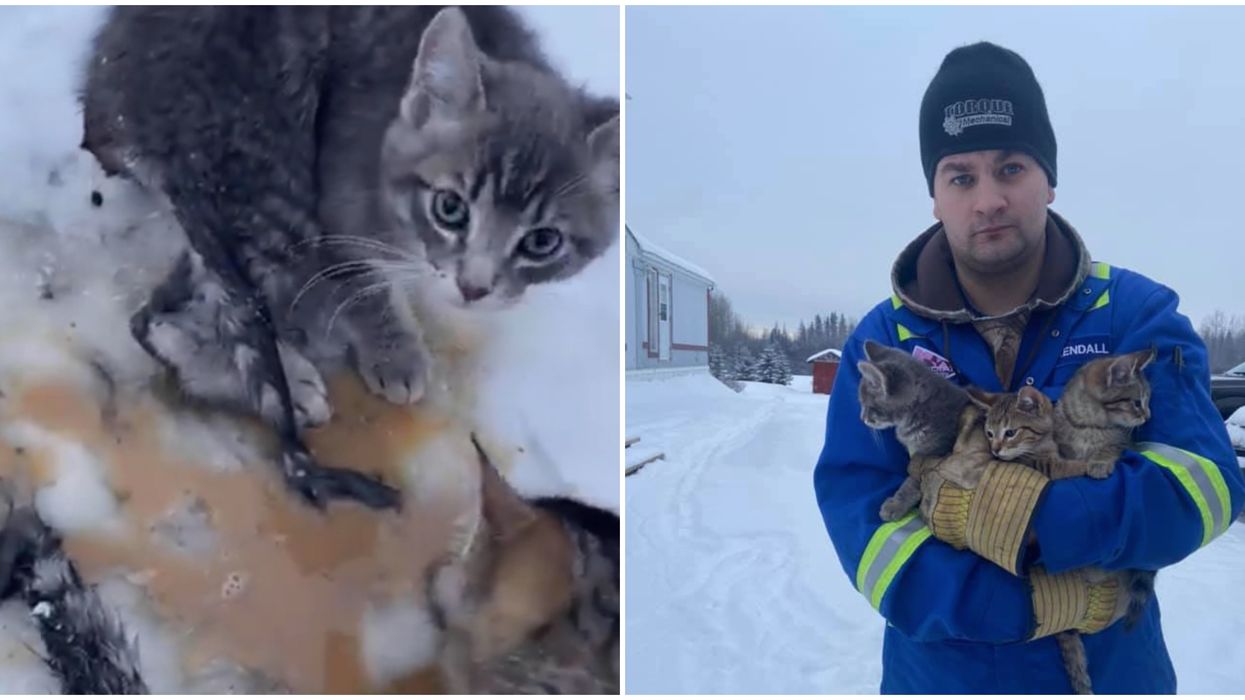 A tragic scene turned into a heartwarming story when an Alberta man came across three abandoned kittens near Drayton Valley on Wednesday, January 22. The man, Kendall Diwisch was able to save them and shared the Alberta cat rescue video online. The video has since gone viral and Diwisch has even shared an update about how the kittens are doing now.

In Diwisch’s Facebook post he explains that he found the “three fellows” on a back road near the oil well where he works.

“Poor things were frozen into the ice so they had to have been there all night,” he wrote.

The video shows him approaching the little creatures in the snow. “Look at these little guys,” he says. Then, talking to the cats, he says “it’s alright, it’s ok. You’re frozen to the ice. Have you been here all night?”

One of the cats isn’t frozen, but the other two have their tails frozen to the ground.

Once Diwisch sees this, he tells the cats to hold on and goes to this truck to get his coffee. He pours the warm coffee on the cats’ tails and is able to get them free.

His creative and quick thinking was a total game-changer in this sad scenario.

The little animals are crying right up until they’re rescued and picked up by their saviour. After he’s scooped them up, he walks back towards his truck and says “that is so cruel.” to himself.

His post explains that after the video, he took them home and gave them food and water.

“If any friends are looking to have a new addition in their family, let us know as they will need homes. All three look to be males, and we also gave them dewormer,” he wrote, not taking his temporary cat dad position lightly.

He has since shared an update on the same post that says “All three little rascals went to their new home today where they get to be together instead of separating them,” and we could hardly read it without tears in our eyes.

He explained that all of the little fur babies are eating and drinking and they are full of energy.

What started as a very sad event turned into an incredible act of kindness.

It is winter, which means Alberta is as cold as can be, and the SPCA has seen a huge spike in animal distress calls. If it's too cold for people to go out, it's definitely too cold for pets.

There are always animals looking for homes in Alberta, so sweeties like these could end up being your new best friends if you stay on the lookout to adopt.