With record breaking fires in the Amazon, people want Canadian resources to help. 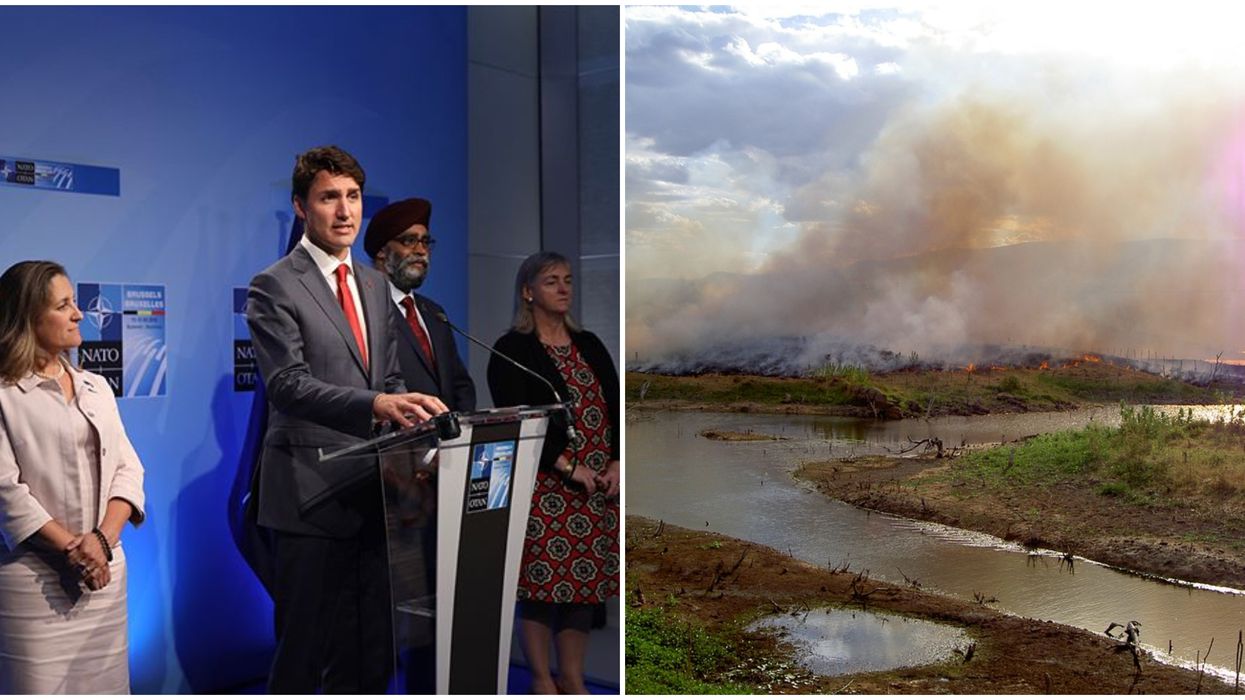 For the past few weeks, the Amazon Rainforest has been on fire. This isn't completely unheard of as wildfires occur every year but recent data from Brazil's National Institute for Space Research shows that this year's fires have been record-breaking. The devastating news is now prompting people to look for international help, specifically, people are turning to Justin Trudeau.

In fact, this year over 74,000 fires have burned in the Amazon Rainforest. In the last week alone 9500 new fires were spotted and the recent fires are a definite cause for concern. It's especially concerning that as of Tuesday, August 20, over half of Brazil was covered in smoke from the wildfires.

In images recently released by Copernicus, a European Union satellite program, it showed smokes blanketing Brazil and even stretching across the entire South American continent from the Pacific to the Atlantic ocean.

Meanwhile, on social media, pictures from Sao Paulo, Brazil showed how impactful this wildfire smoke has been. The images show the city being plunged into darkness as the thick smoke rolled in, causing a mid-afternoon blackout. If that's not bad enough, Sao Paulo is thousands of kilometers away from where the forest fires are burning, which indicates that these fires are massive.

Of course, with a situation this extreme, people want something to be done about it and they are turning to Canadian Prime Minister Justin Trudeau for help.

@JustinTrudeau What is our government doing right now to help the Amazon rainforest? Please tell me there is a plan.
— Mychelle (@Mychelle)1566386884.0

In the midst of the massive fire, the Prime Minister has been receiving tweets from Canadians and people around the world asking the Canadian government to send aid and resources to help put these fires out.

@JustinTrudeau HEY THE AMAZON RAINFOREST IS ON FIRE, CAN YOU DO SOMETHING PLEASE?
— Shannah (@Shannah)1566405191.0

@JustinTrudeau your people need reassurance that our resources will aid the Amazon Rainforest fires and representat… https://t.co/2ycHBf6CVF
— B. C. Clare (@B. C. Clare)1566412066.0

In fact, some have even started a petition calling on the Canadian government to respond to these fires. The petition only has a goal of 5000 signatures and at time of publication was already over 3300.

While the government of Canada has not officially responded to these forest fires in the Amazon, they do warn Canadians about the risk in their travel advisory for Brazil.

Under their general warning about climate and natural disasters for Brazil, the government states that forest fire season lasts from May until September there.

In the event of a major wildfire, they warn Canadian travellers in Brazil to: