Apparently, There Are People In This World Who Actually Believe Canada Doesn't Exist 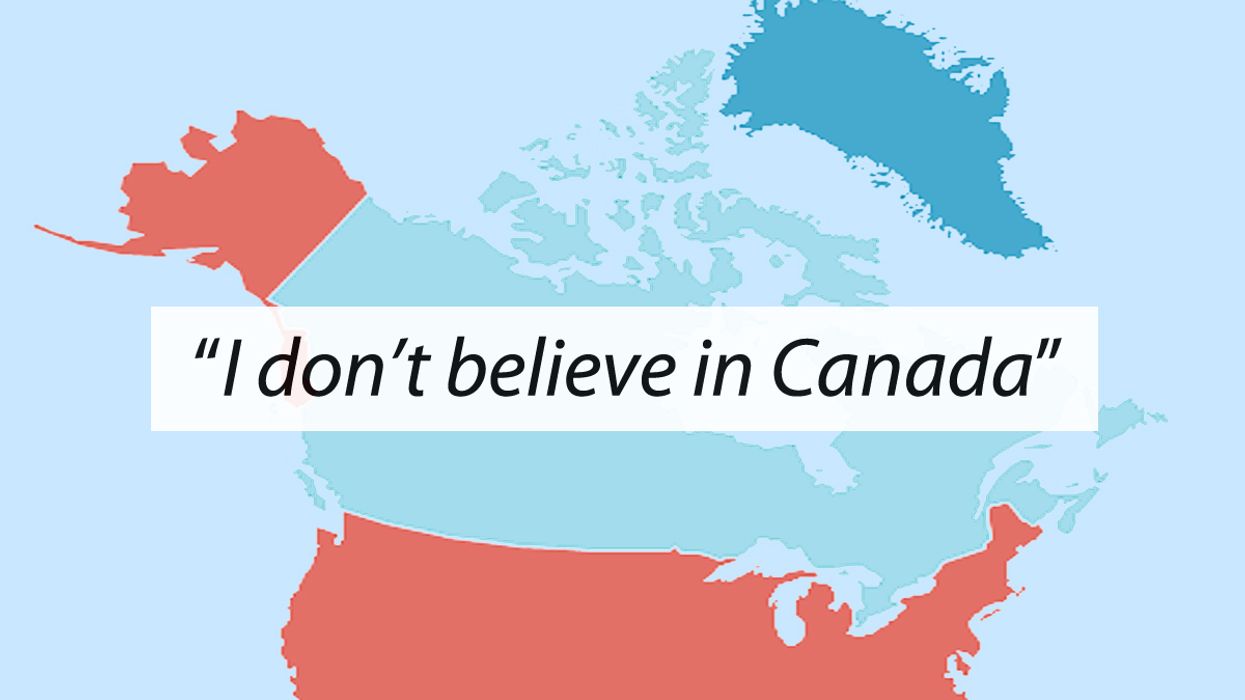 A new Reddit thread has prompted discussion of a ridiculous theory that Canada doesn't actually exist.

Yes, this is really a thing - There are some people who claim that Canada isn't a real place, and that it's simply an imaginary concept created by the government to manipulate the masses with visions of fantasy and grandeur.

The discussion began with a screenshot of a Facebook status that questioned the deportation of Canadians who are illegally present in the United States. The poster of the status, an American, wrote the following:

Naturaly, Redditors were quick to react. Many commenters called out the poster for being out of line...

"I'm proud of my country, and Americans acting like Canada is a glorified state, even ironically, pisses me the f*** off." - deleted

"Well yeah. Calling it the 51st state is pretty insulting. It'd be more like 51st to 64th states if they went with current provinces and territories." - chriswearingred

Another related discussion on Debate.org has 90 per cent of commenters also saying that Canada doesn't exist. While most of the comments seem oversensationalized for the sake of pulling people's legs, other comments are so carefully thought out that you might actually think these people really believe Canada is a farce:

"Totally a fantasy - We have all heard of the fairy tale about a far away land called, "Canada." It is said that many mysterious creatures live there but in all my research I have come to see that this place is in fact a myth. We have all been fooled into believing the cotton-tailed lies of this "Canada" and everyone who claims they are "Canadian" are full of sh*t"

"Make America Great Again - Of course a place full of maple syrup, moose, universal health care, a weakened separatist movement that speaks a different and unique dialect of French, and Royal police-riding horses is just a myth Americans tell their children to scare them. Canada is the OG boogey monster and the fear it inspires keeps kids straight."

"Canada is a sick joke - The 'Canadian' myth is fed to us by the deranged inhabitants of the Arctic Circle. The continued insistence by those people that their loose alliance of despotic nomads constitutes a nation state is an insult to all the veterans of wars where the fought for freedom and democracy. In essence they are besmirching the good names of our fathers, grandfathers, great grandfathers and even hitler, who, being Australian, came from a country that can claim to be at least half real."

"No it doesn't - This is clearly a myth. How could a so-called "country" exist soley on maple syrup exports? It is clearly a ploy by the United States Government just like Area 51. For decades Area 51 was a conspiracy theory and it ended up true. "Canada" is nothing more than some myth created by the US government for some secret project."

"Canada is a stupid idea - The idea that Canada exists is a stupid and idiotic idea developed by the government to create the illusion that peace and harmony exists in the world right now. C'mon guys!!!! The idea that a place that has only kind people is utterly ridiculous. It's like if Narnia existed; it would be cool, but impossible."

The other 10 per cent of commenters were quick to present their arguments, clearly frustrated that such topic was even being debated at all:

"Canada does exist - Canada does exist. They are a very real country, with a government that has divisions and a head, just like the government in the United States does. They have a legislative body and they are divided up in to smaller sections that have their own governments as well. They have people and those people pay taxes to their country."

"Canada is real! - I AM LITERALLY GOING TO SCHOOL IN CANADA RIGHT NOW. Just think about it. Where on earth would Team Canada come from in the Olympics? Where on earth would all the Canadian hockey teams come from? You guys are idiots. CANADA IS REAL! Just think, why else would there be an argument. You can't just invent and make up a country."

"F*** you all - Why the hell would you think Canada doesn't exist? I bet you all are trolls on the internet, who have nothing better to do than sit on your fat asses all day and shit out worthless posts that you call factual information. So, go right ahead and turn the internet to shit, just go do it on websites like 4chan or Tumblr to feel better about your sorry lives."

Maybe it was all just a joke to trigger Canadians, or maybe these people actually believe it's all a conspiracy. Whatever the case, it sure makes for an interesting read.