Arie Luyendyk Jr. And Lauren Burnham From The Bachelor Just Announced That They're Having A Baby

Arie Luyendyk Jr. and fiancée Lauren Burnham are having a baby together. 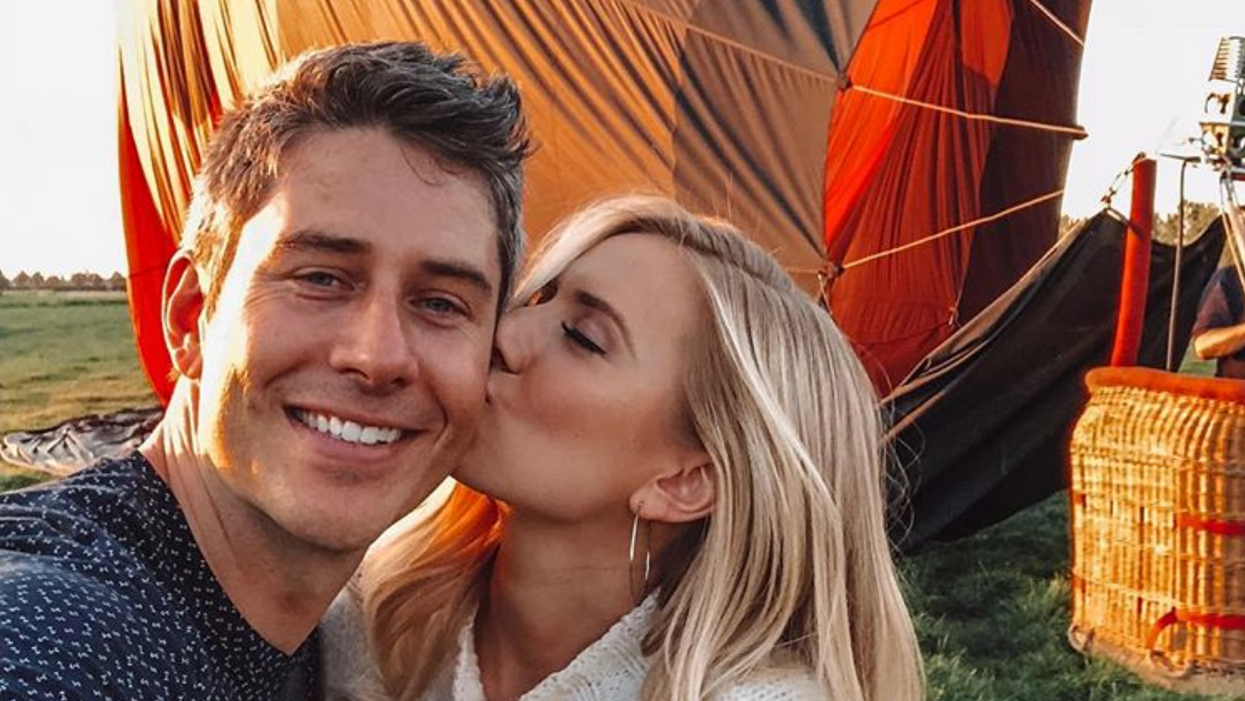 Major Bachelor news broke today, and Bachelor Nation is totally freaking out. Arie Luyendyk Jr. and fiancée Lauren Burnham from Season 22 of The Bachelor have announced that they are pregnant with their first child.

The couple met on the show and got engaged in March this year. Now before they've made it down the aisle and half a year after their engagement, they already have a baby on the way. "I kind of had a feeling that I might be pregnant. So my friend insisted on bringing a pregnancy test over," 26-year-old Burnham told Us Weekly. "Arie came out with the test in his hand and tears in his eyes. He was like, 'You’re pregnant!'"

The baby was not expected, but the couple is excited nonetheless. "We weren’t trying, but we are so excited. It’s going to be a whole new chapter in our lives," said Arie.

People were completely not expecting this news – and honestly, same. Considering that they're not the most popular Bachelor couples (tbh one of the most hated), not everyone was wishing them well and sharing their happiness. Check out some of the reactions on social media so far – they're pretty savage. Let's just say that not everyone is all too pleased about their baby news.

ARIE AND LAUREN ARE HAVING A BABY IM SORRY WHAT?

They may both have the personality of a tree branch but watch them prove everyone wrong and still be together and happy in like 50 years. pic.twitter.com/dSrGiPuxvS

He does know that he can swap the baby out for a new one that he likes better, right?

The Bachelor Mansion is in the wildfires, Chris Soules is going to prison, Shawn and Kaitlyn broke up, Grocery Store Joe got voted off DWTS, Sean Lowe’s baby is in the PICU, Jason isn’t my Bachelor, and NOW Arie and Lauren are having a baby?! I can not watch this show anymore... pic.twitter.com/pwmxgkSHOS

Many of the tweets ripped on Arie and Lauren. The couple was not the most beloved of Bachelor couples and has had its fair share of controversy – and this is us putting it gently. Lauren was the runner-up on Arie's season, and Arie got engaged to Becca Kuffrin on the finale.

However, he changed his mind after the show and dramatically broke up with Becca on camera and instead proposed to Lauren for one of the most dramatic breakups ever – cue Chris Harrison's voice. Honestly, everyone probs would have been more excited if it had been literally any other Bachelor couple welcoming a baby, ahem JoJo and Jordan.

The couple has a couple of major milestones ahead of them this year. Besides a baby coming on the way, the pair will also be tying the knot. They announced back in May that they will be tying the knot on January 12th, 2019 in Hawaii, according to People.