It ain't her fault that she's out here making news. 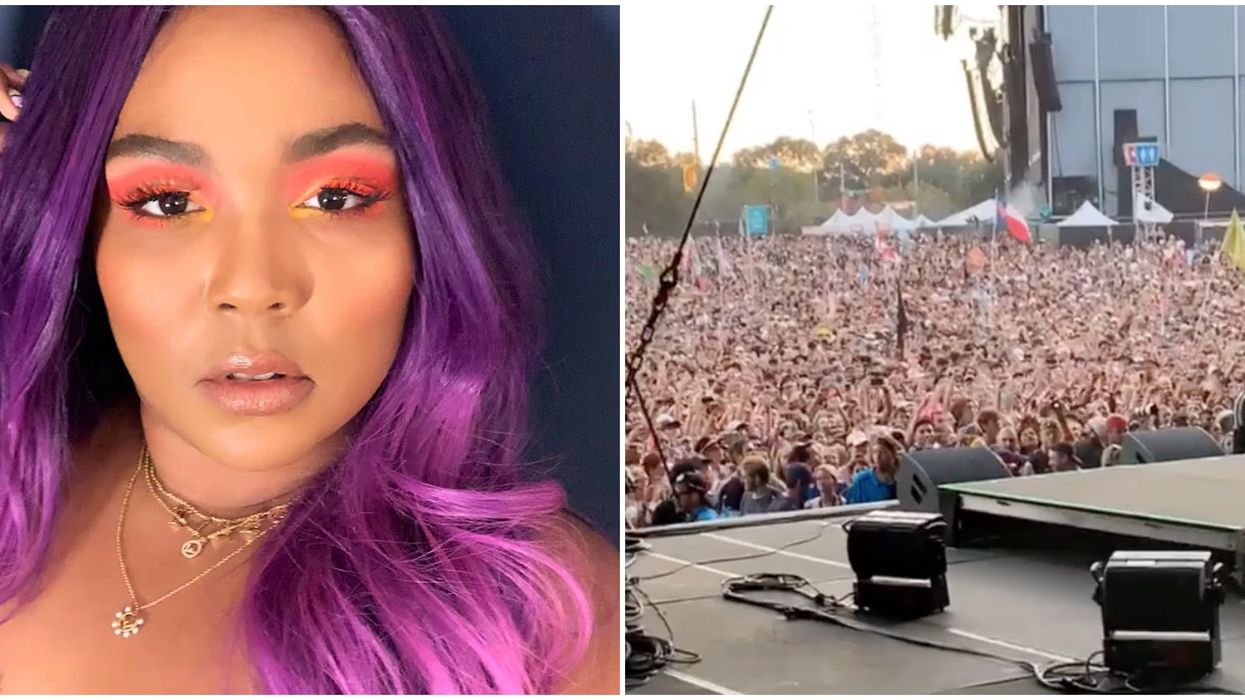 It should come as no surprise that Lizzo got the kind of crowd she did last night at Austin City Limits. Unfortunately, it seems like the only people who were shocked over it were the ones that decided Lizzo wouldn't get a headliner spot this year and therefore would perform on one of the smaller stages. As a result, people were getting trampled during Lizzo's ACL performance and are demanding she get a bigger stage for the festival's second and final weekend.

There's no doubt in our minds that Lizzo deserved better last night, as well as the thousands of people who came out to see her. According to her Instagram story, there were 60,000 people singing along to Truth Hurts, one of her most iconic songs, which couldn't have been safe for anyone gathered around such a small stage. No shade whatsoever towards Mumford and Sons, Cardi B, or Kasey Musgraves (who actually watched Lizzo's performance from backstage) but why wasn't Lizzo a headliner again?

ACL's official Twitter account actually had the nerve to tweet about how "epic" Lizzo's crowd was, and it didn't take long before Twitter users responded enraged. "Safety hazard", "trampled", and "stampede" were just some of the words repeatedly used in the replies as well as Lizzo's fans begging for her to get a bigger stage next Sunday. As fellow Lizzbians, we couldn't agree more.

Also in the replies were people discussing how in all of their years of going to ACL, this was the most insane crowd they had ever seen, especially for a non-headliner. Even Lizzo was a little shook and was caught mouthing "damn" when she looked out at the crowd after one of her performances. Everything is bigger in Texas, and now Houston-grown Lizzo knows more than ever how true that is.

We're not sure if Lizzo getting a bigger stage for next weekend is possible or not, especially with her performance now being less than a week away. Let's hope ACL at least attempts to do better, because if her crowd next weekend is as big as it was last night, then even more people are going to have a problem with how Texas' most famous music festival runs things. One thing is for sure, Lizzo is forever our queen.

Tickets go on sale tomorrow and there are some big headliners!


Osheaga is finally returning to Montreal this fall after a year-long hiatus due to COVID-19, so get ready, festival-goers.

The music festival announced its anticipated return on Facebook with "OSHEAGA Get Together" on Thursday morning. According to the announcement, there will be three days of live music from Friday, October 1, to Sunday, October 3, with headliners like Jessie Reyez and more after multiple cancelled shows in 2020 and 2021 due to COVID-19.

Organizers are planning a vaccine pop-up before the festival!

If you want to party it up at the Escapade Music Festival (EMF) in Ottawa this September, you're going to need to be vaccinated against COVID-19.

EMF announced in a statement on Facebook on July 19 that the festival will return this fall from Friday, Sept. 3 to Sunday, Sept. 5.

The COVID-19 pandemic pretty much ruined all of our festival fun in 2020, but one massive music fest is returning this year to make up for the absence of good jams and raging crowds.

The Bonnaroo Music and Arts Festival, hosted in Manchester, Tennessee, is returning this year from September 2-5 and they're bringing Lizzo, the Foo Fighters and many other big-name artists with them.

St. Patrick's Day 2021 has arrived but the COVID-19 pandemic continues to disrupt daily life, making in-person celebrations difficult for the second year in a row.

You can, however, still find ways to celebrate, as there are many virtual celebrations that will allow you to enjoy the holiday safely from your couch.