Everyone needs a self-distancing buddy (or four). 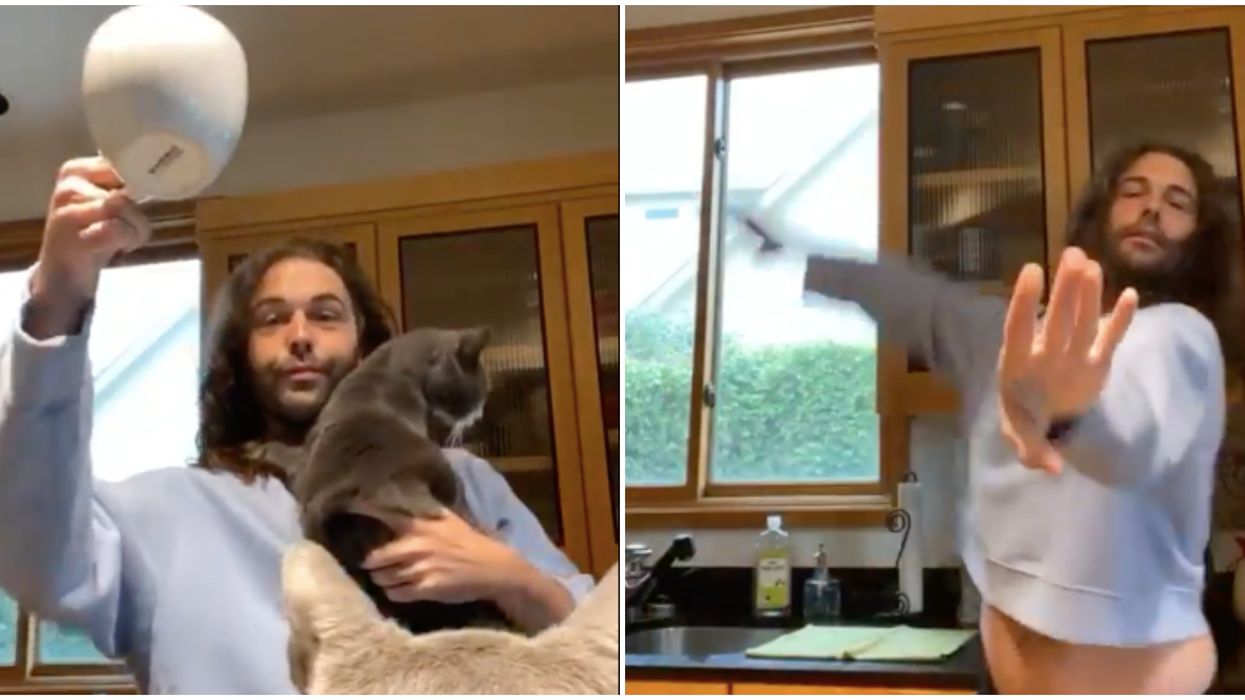 We're all slowly getting more and more bored of being stuck at home during these trying times, and it's starting to get obvious. While other stars in their mega-mansions might be thriving with their in-home movie theaters and luxury pools, most of Netflix's Queer Eye guys are stuck in Austin, Texas rentals during the city-wide "stay at home" order. Jonathan Van Ness is documenting his hilarious adventures with his cats and we cannot relate more to him.

Every morning, Jvn posts his morning routine on his Instagram story to keep all of his followers quite entertained. He will film his daily workouts, dance routines, and clips from his personal project interviews.

This morning, he released a long clip of him and his cats jamming out to Hamilton in his kitchen and it is hilarious.

The Queer Eye star wears his long shoulder-length hair down in loose waves over his light blue sweater, smiling and dancing for the camera as his Broadway jams play.

His cats start to join in on the musical fun as they walk in front of the camera and steal the spotlight.

Jonathan is seen pouring coffee into his large coffee mug while simultaneously dancing and singing along to Hamilton's "Satisfied".

This adorable clip comes after yesterday's jam Instagram story jam session where the Fab Five member was seen twerking to Meg the Stallion, with yet another large cup of coffee in hand.

His dramatic dance performances, the abundance of cats, his music choice and unbothered appearance make for a very familiar scene that a lot of us can relate to right now.

He finishes off his IG Story dance with a little message saying "Hope you're ok", assumingly addressing all of his fans during this hard time.

Jonathan has also been posting regular "IGTV" videos that he calls CATV. It is a parody news show featuring his 4 cats as the news anchors. Definitely a must-watch if you need a animal-loving pick-me-up!

He has also been releasing his interviews with different qualified University of Texas at Austin professionals for his podcast, Getting Curious with Jonathan Van Ness.

They were filmed ahead of the city shut down and feature some interesting, well thought out content.

It's only time before the world slowly goes back to normal and Queer Eye can get back to filming their sixth season in Austin!