Firefighters had to use a jackhammer to chisel them out. 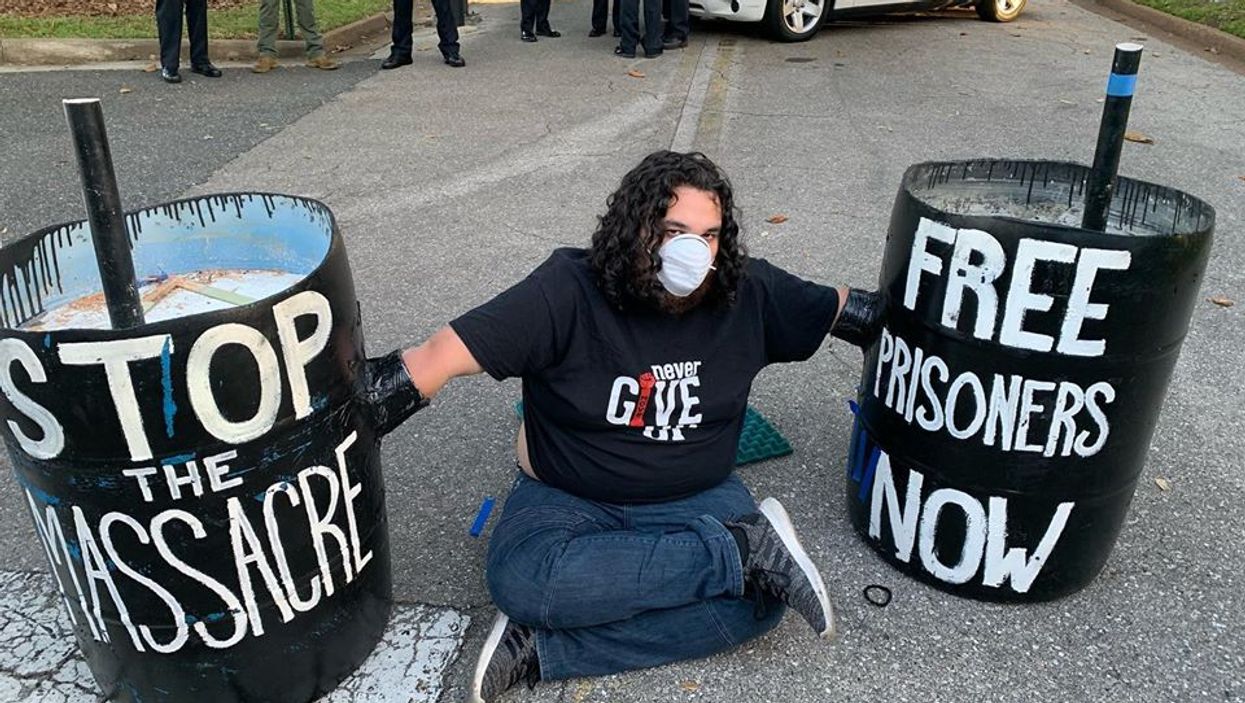 In an attempt to make a lasting statement, a Gainesville local who chained themselves to barrels filled with concrete outside the Governor's Mansion in Tallahassee now fears they might have been exposed to COVID-19 while in bookings. The demonstration on April 17 was staged to demand the release of prisoners at risk due to COVID-19. Since their arrest, they have been self-isolating.

"I've been quarantining myself at home, and I've been keeping track of my temperature and seeing how I'm doing," Jordan Mazurek, Gainesville Incarcerated Workers Organizing Committee (IWOC) organizer said to Narcity in a phone interview. "I think it's an entirely real possibility that I've been exposed. So I've been keeping my distance from folks."

According to the Tallahassee Police Department, they were arrested and charged for resisting and obstructing arrest without violence with a fellow protester, Karen Smith.

Mazurek and four fellow protestors set up outside the gate leading to the mansion before 6 a.m. with the two large plastic barrels filled with concrete.

Each drum was adorned in white letters with one reading "Stop the massacre," while the second read, "Free prisoners now."

"We decided on the Governor's Mansion because, at the end of the day, he and [Secretary of Corrections] Mark Inch hold all the power to do anything to protect folks from getting COVID inside," said Mazurek. "We thought we needed to make a statement that was going to last a while, which was why I chose the concrete method."

Pipes were installed inside both barrels with metal bars that Mazurek could attach their arms to by using carabiners.

This mechanism prevented any forcible removal but allowed Mazurek the ability to unclip their hands upon choice. Despite police and firefighters attempting to talk them out of the barrels, their decision to "hold out" was aimed at leaving a "lasting statement.""There's this drive for everything to 'go back to normal' when in reality, normal was not working for a vast majority of us in the first place," they said.

Firefighters resorted to using jackhammers to free the protestor.

The demonstration follows other protests earlier that week, where Gainesville IWOC and other fellow prisoner rights advocates in a caravan of about 20 vehicles drove around the Capitol complex and the Department of Corrections' headquarters in Tallahassee.

Similar to Mazurek's protest, the drivers called upon officials to release inmates in Florida prisons and jails to help stop the spread of COVID-19.

According to the Florida Department of Corrections, 119 inmates have tested positive for the novel coronavirus as of Monday.

The news comes after the death of two inmates at the privately-owned Blackwater River Correctional Facility was kept secret for nearly a week despite inquiry, the News4Jax reports.

The ordeal lasted until 5 p.m., with both protestors released the same day.

Mazurek said that while they haven't heard anything from government officials about the demonstration and their demands, people incarcerated have heard what they're doing and are encouraging them to continue the fight.