Is that person actually shovelling with a lawn chair? 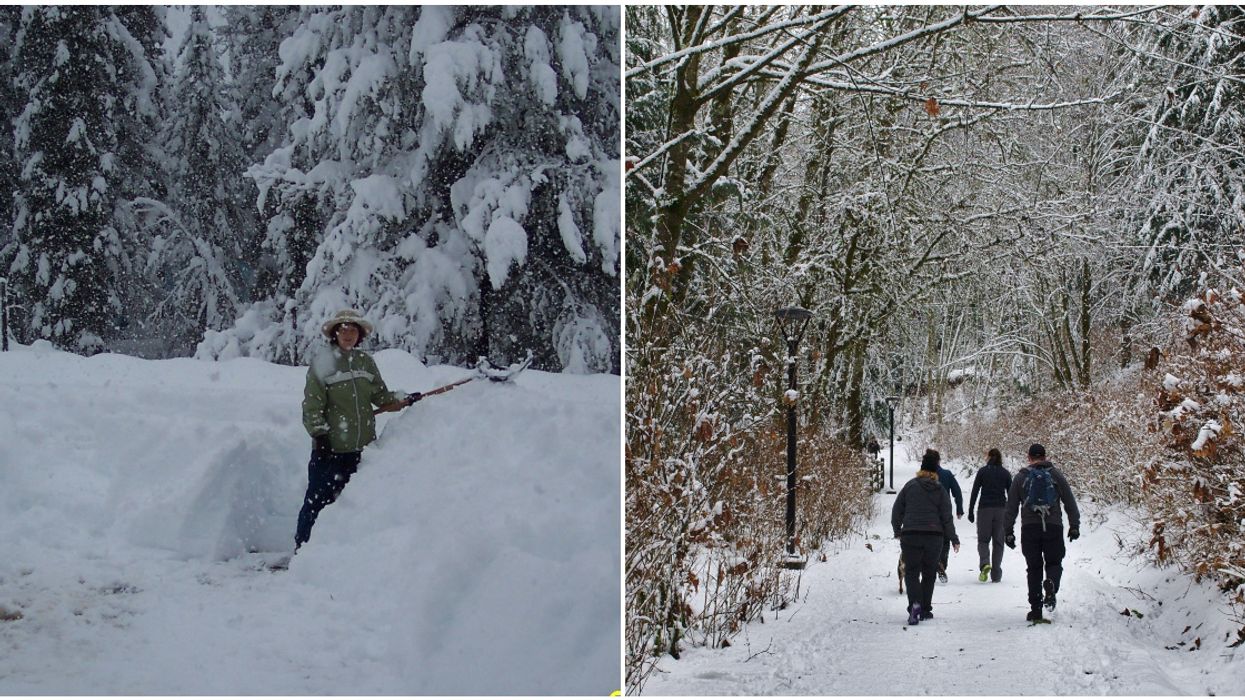 Winter has finally made its way to B.C. and there is nothing chill about it. For the past several days, B.C. has been hit with snow, wind, flurries, and enough ice to rival Frozen. Right now, a B.C. storm is taking over parts of the province including Vancouver and people are having the best reactions.

It is a full-blown winter storm out there and as you can imagine, people just don't know how to act.

It's so bad that temperatures of -45 C are expected alongside 120 km/h w winds. Tragically, we aren’t making this stuff up.

In typical B.C. fashion, the drama is real right now.

When Metro Vancouver received a large snowfall last week, everyone was freaking out and public transit actually shut down and announced major delays.

Now, people are back and better than ever with their reactions to the snow.

We've rounded up some videos that perfectly sum up what it’s like in B.C. when it snows.

From cars getting stuck to bizarre people wearing shorts, it is all happening right now and we are just happy some people managed to catch it on video.

This should go without saying, but be safe out there and stay warm.

You ever been so desperate to remove snow that you shovel with a chair? Neither have we but apparently, someone has.

According to a video posted on Twitter, someone was actually caught shovelling with a folding chair and all we can say is, wow.

How Much Snow Did You Get? About One Dogs Worth

B.C. received tons of snow and in order to measure it out, someone threw their tiny fur baby outside to measure.

The poor thing looks less than enthused but we had to see how deep it was somehow.

If you happen to find yourself driving in this weather, you may actually be sliding instead of rolling.

One video posted on Twitter perfectly shows what it’s like to try and drive in these conditions. From getting stuck to sliding around, this seven-second video is the perfect depiction of the current mood on the roads.

You Have To Get To Work Somehow

People in Vancouver already have stressful, long commutes without the snow. Well, you can spice up your morning by commuting on skies.

There is literally enough snow out there that this is a reasonable form of transportation.

At Least Someone Is Enjoying This Nightmare

This dog is a little more enthused than the chihuahua you saw above. Probably because it's a Bernese mountain dog and they live for these temperatures.

This dog has the total snow zoomies and honestly, it has better traction on the ice than most winter tires do.

Winter, But Make It Fashion

Skin exposure in this type of cold weather can put you at risk but apparently, some people don’t care.

A runner in Kitsilano was actually caught on video running in a pair of shorts giving the ultimate middle finger to Mother Nature.

Could You Be Any More Canadian?

This video was taken on January 13 but it was too good not to include.

Canadians will do anything to strap on the skates so when your neighbourhood roads resemble an ice rink then you better believe we are using that to our full advantage.