This 3.5 KM Hike Takes You Through Abandoned Train Tunnels In BC

Bring your sense of adventure and a flashlight 🔦 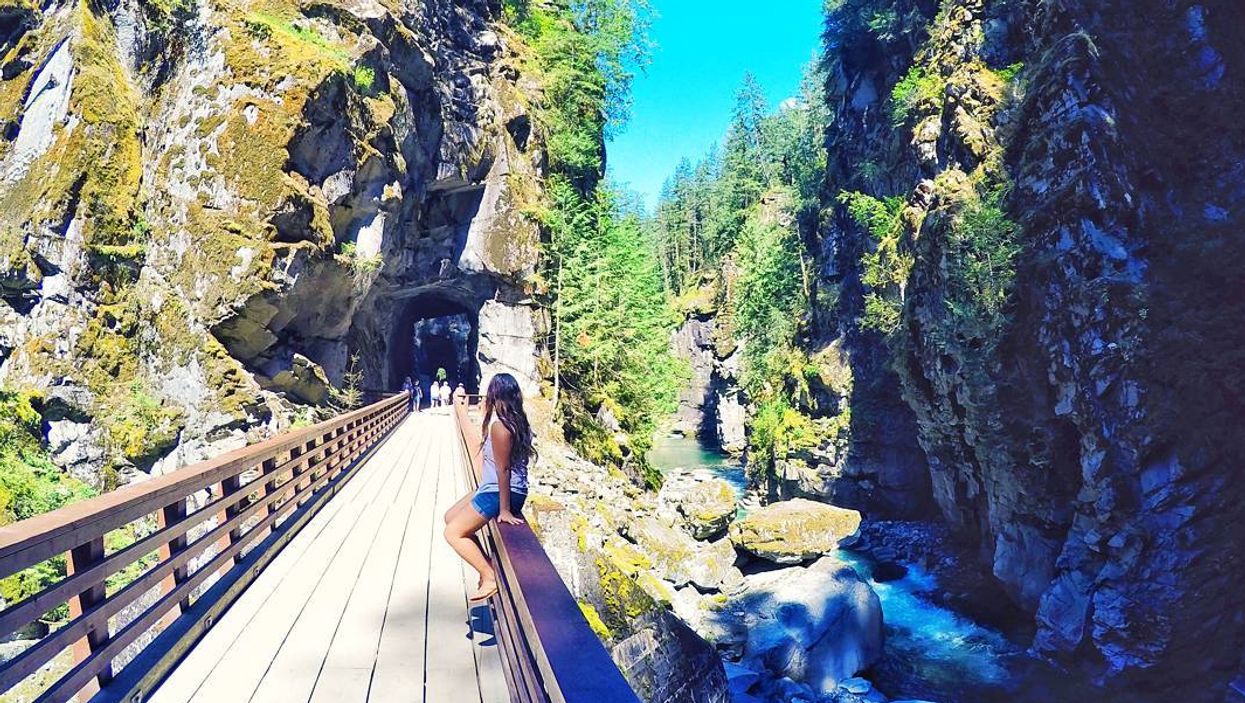 Ready for an adventure this summer? The popular Othello Tunnels are about to open for the season and we can't wait to check them out! This is a great hiking trail for beginners with little to no experience because it's pretty flat and gradual since it used to be a track for trains. This place actually dates back to the early 1900s when Canadian Pacific Railroad tried to link the coast with the Kootenays by blasting through granite to create a railroad.

You can find the Othello Tunnels at Coquihalla Canyon Provincial Park in Hope, about a two-hour drive from Vancouver. The hike itself is a breezy 3.5-kilometre loop on a gravel trail. The tunnels on this incredible hiking trail are only open during the summer so you absolutely have to take advantage of this opportunity.

This is one of the most iconic day hiking trips you could take in B.C. The combination of the tunnels, bridges, and rugged Rocky Mountains make this place look incredible both IRL and in your photos. Imagine yourself back in the early 1900s here and what it must have been like to build this incredible railroad trail.

The only thing about this hike is that you have to be fearless. You can't be scared of the dark and you can't be scared of hikes. Bridges cross high above dangerous rivers with jagged cliff edges and the tunnels can get a little spooky. Definitely bring a flashlight with you and if you think that's lame then just pretend you're like Nancy Drew or Indiana Jones exploring and looking for clues.

Right now, the plan is to have this trail open and ready to go for the May long weekend, but last year it didn't open for the season until closer to June. For the latest updates on the trail and to find out more, check out the BC Parks website for Coquihalla Canyon Provincial Park.

Proof of vaccine will be required at most establishments starting September 22.

Ontario is officially getting vaccine certificates next week and the program will launch on Wednesday, September 22.

Starting then, Ontarians will have to provide proof of vaccination to enter establishments like restaurants, movie theatres, and live sporting and music events. While there are some settings where you won't have to whip out your certificate, you can expect to be fined and penalized for violating the rules.

According to The Weather Network, the first fall-like storm of the season is set to hit British Columbia's South Coast by Friday, bringing widespread rain along with it.

There are a number of unwritten rules... 😅

When I decided to move to Canada from the U.K. back in 2019, I was pretty sure I was prepared for what was to come.

Winters are cold, food is expensive, remember to tip if you eat out in a restaurant. They're the basics — or so I thought.