19 Things That Make You An Asshole Everywhere But Calgary

If I'm gonna be an asshole, I might as well be a Calgarian one.

Calgary is full of generally nice people. We usually keep our negative opinions to ourselves, which is essentially the foundation of being nice, right? Calgarians are definitely the "nice" Canadians the rest of the world talks about.

READ ALSO: 49 Things That Will Definitely Happen To You After Moving To Calgary

However, Calgary has a few idiosyncrasies that would probably be considered impolite or overly absurd outside our city limits. But that's just part of what makes Calgary so awesome, right? We've definitely got character. Here are a few of those "characteristics" that might make you a total asshole everywhere but Calgary... and now that I think about it, sometimes in Calgary too...

Ignoring parking lines (and sometimes creating parking spaces) just because we have a truck.

Truck owners in Calgary are just too glam to give a damn.

Taking our horses for a walk down the freeway.

...and not collecting the horse droppings left behind. But we get it, horse manure is just a little too big for doggy bags. Just a little.

Writing passive-aggressive notes and leaving them on cars, neighbour's front doors or on the receipt at restaurants.

Understandable. We gotta really hit 'em where it hurts sometimes!

Shovelling all our snow onto our neighbour's property.

It's fine... we'll just keep passing it on. Almost like a game of telephone. Last one to shovel their walk is a rotten egg!

Dressing our animals and small children up in Flames/Stampeder attire during every game.

But you have to admit, this is really cute... Even if it's against their will. Who knows? Maybe your pup is an Oilers fan... *hysterical laughter*

Judging people's character based solely on their favourite hockey team.

Can you believe Steve likes the Canucks?! He must hate puppies and happiness or something.

Getting wholeheartedly angry when someone mentions snow or wishes it upon the city when the sun is out.

How dare you mention the S word. You are dead to me.

Making 43 status updates about the weather as if no one else has windows... or eyes.

Yes, we see it is snowing right now. Thank you for the Facebook weather updates, Carol. 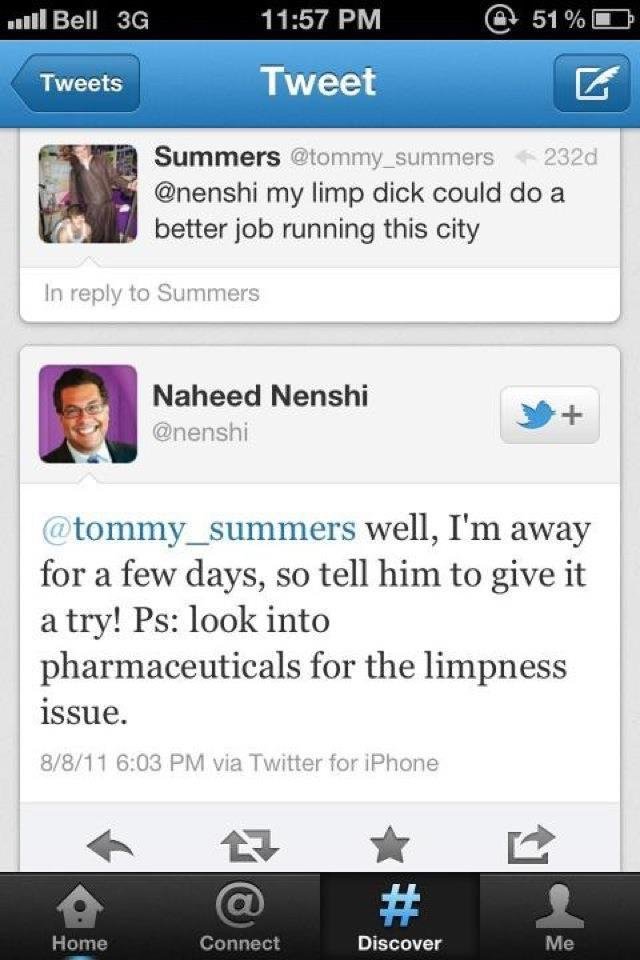 Sending vulgar tweets to the mayor.

But his responses are always amusing af!

Not allowing people into our lane when their lane is ending.

Causing them to come to a complete halt on the side of the road. No, no, after you! I'll just wait here... on the side of Deerfoot... with my signal on... as you all speed past me... because I'm an invisible car...

I'm driving this close to you because I love you.

Honking for no apparent reason.

Sometimes, it causes other people to honk then it passes on almost like a car orchestra. Such beautiful musicians we have in Calgary.

Neglecting to completely rid your car of snow from last night's snowfall.

...Causing all the snow to fly onto the windshield of the person behind you.

You're truly not a Calgarian if you don't own/have an intense love for trucks. Bonus points if it's lifted. Triple bonus if you're a girl.

Having a knack for great truck/car stickers.

"If you're gonna ride my ass, at least pull my hair." Only the classiest reside here in Calgary.

Yelling randomly in bars when drunk.

If you can't think of what to yell, a simple "WOO!" will suffice.

Stepping on or bumping into people at Stampede without apologizing.

It's fine, we're all friends here. It was obviously an accident- oh, you're just gonna stomp on my foot for a third time, huh?

Aggressively to get on the train/bus before everyone is off.

I don't really know if there's an excuse for this one.