34 Signs You Are Definitely From North Vancouver

Where the city sleeps by 9pm

We The North. It doesn't get more #PNW than North Vancouver.

SEE ALSO: 18 Signs You Grew Up In West Vancouver

North Vancouverites have their own struggles and truths that can only ring true to someone who was born and raised in the northshore mountains.

Here's a list of signs you're definitely from North Van.

1. You bump into someone you know every time you go to the Safeway at Westview Center.

2. You know the Carson v. Handsworth rivalry is real.

3. You're more concerned about being attacked by a bear coming home from The Raven Pub than being robbed.

4. The tiny family home you grew up in is now worth an easy mill.

5. You hike Quarry Rock all season and are so excited to take anyone who hasn't been.

You're from Ontario? Have you been to Quarry Rock? Doesn't matter, we're going.

6. You can't remember what the Lonsdale Library looked like before the renovations.

7. You had a full blown panic attack when The Bake House in Edgemont closed down.

I'm NOT going to Dundarave to get a baked brie.

8. You hate how much better Park Royal is than Cap Mall.

Why am I forced to shop at Sears?! Get an Urban Outfitters already.

9. Clubbing downtown means going out really early so you can still catch the last seabus home. 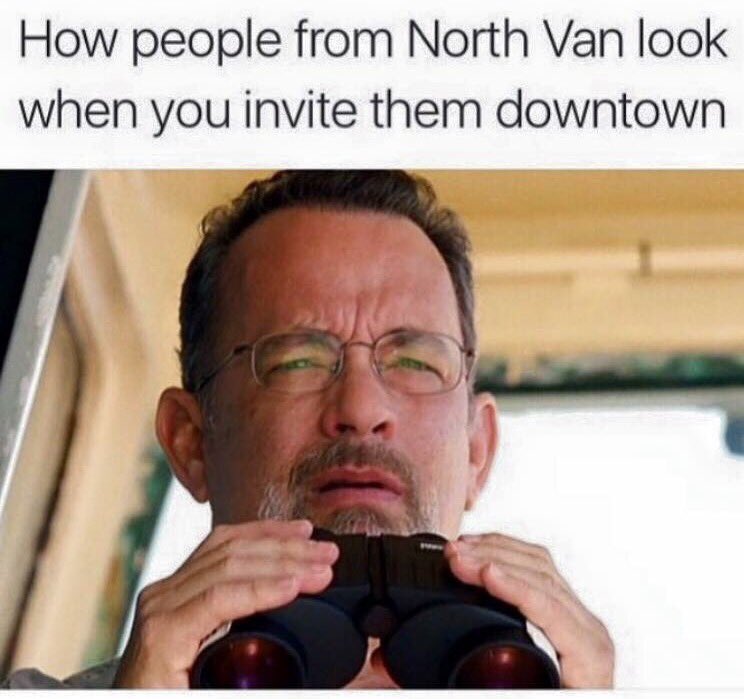 11. You were stoked when Tap & Barrel opened at the Pier.

12. Until you realized that getting served there meant attending your high school reunion.

Does Mom and Dad's basement still count as moving out?

14. You consider Burgoo a "fancy dinner out".

15. Your biggest struggle in life is figuring out which donut you're going to buy from Honey's.

16. You're not star struck when you see an NHL player anymore.

Unless it was a player off The West Coast Express.

17. You know to go to the Lynn Canyon Suspension Bridge over Capilano's.

18. You've seen the Grouse Mountain lumberjack show at least once.

And you're still impressed at how they make a chair out of a stump.

19. Every Christmas you go to the Park and Tilford gardens.

21. You've become a pro at determining when to take the Lions Gate over the Iron Workers.

22. The consistent power outages have made your earthquake/survival kit so bomb.

23. Your cat is forced to be an indoor cat because of the coyotes.

24. You get excited to drive down Forbes just so you can read the sign at Contact Printing.

25. Your Friday nights in the summer are spent at the Shipyards Market.

26. You've been waiting for what feels like a decade for the Whole Foods on Lonsdale to open.

27. You get annoyed when downtowners mix up North and West Van.

No, you can't come to North Van and go to Ambleside.

28. The opening of The Juicery on Lonsdale was LIFE. CHANGING.

29. You're not sure if you live in the city or the district.

Just tell me what to fill out on this waiver.

30. You weren't emotionally ready for William Griffin to close for renovations.

32. You've been to the top of the Q at Lonsdale Quay more than once.

33. You know that the only place to brunch is The Tomahawk.

34. You're aware of the dark curse that looms over The Two Lions Pub in Westview Centre.