Shout out to the Scarborough dude high-fiving everyone.

Now that we are getting into the middle of July, the summer music fest season is hitting full-swing with the likes of WayHome, Veld, and OVO Fest within the coming weeks. Whether you will be attending your first music fest this year or going for what-seems-to-be the millionth time, you should be aware of the guys you will be mingling with on festival grounds.

There is a diverse array of dudes at any given festival, ranging from that group of guys all wearing penguin onesies to that shirtless guy napping in the middle of a field. Furthermore, it is important to distinguish between the various types of guys you will see at any specific music fest so to prepare for any impending contact.

As we began compiling our list of the prototypical bros and music lovers present at your average music fest, a number of them shared the same characteristics of cities situated in (and just beyond) the GTA. How serendipitous, we know. In turn, we tasked our highly specialized team of music fest analysts and prognosticators to investigate the stereotypical music festival dude and appropriately match each respective caricature to their GTA brethren.

1 . Mississauga: Those Dudes Decked-Out In Too Much OVO Gear

Mississauga is located on the outskirts of Toronto, but these guys act like they live downtown and dress accordingly. We get that you like Drake and all, but you don't need to show your support every waking second. After looking at these dudes there should really be a limit on how much OVO gear one can legally wear at once.

You will find these OVO fanboys at OVO Fest (where else?) with as much $100 OVO, XO, and/or TOPSZN gear they can get their hands on. With OVO Sound signee PartyNextDoor reppin' 'Sauga as much as he can these days it is no surprise that his fellow Mississaugans are following in his footsteps. But all we've got to say is take it easy on "the money/sprinkling hand gesture", you aren't Johnny Manziel... cool it.

You can find these guys at any type of festival, ranging from EDM to country music. They are versatile in their musical tastes, but easy to identify by their simple clothing which usually consists of wifebeaters and Gongshow gear. The latter is very important in identifying this type of dude as their Gongshow hats and/or t-shirts usually consist of hockey slang and double entendres. If you see a guy wearing a hat that says: "Dump And Chase" or "Dirty Mitts", you've found one of these guys

Just like your everyday Oakville citizen, these guys only leave their summer cottages to "wheel, snipe, and celly" at any variety of music fests. Oakville dudes have a reputation for being a rich and a little uppity, but they don't care because they are focused on growing the best flow, packin' a lip, and pullin' off "dirty fuckin' dangles."

3. Brampton: That Dude Sketching You Out

There's always a few shady-looking dudes walking around campsites asking if anyone needs a good hook-up because they 'know a guy'. At first you may be a little taken aback by their forward demeanor nefarious business practices, but then you'll realize that you're at a music fest and this guy is just making sure everyone is having a good time. Wait, I'm totally out. Come over here, dude clearly selling drugs!

If you're from Brampton you may resent your city because of its boring and somewhat sketchy character. But deep down you had good times grabbing lunch at Oceans Food Market in Shopper's World Mall or simply walking around the "scenic" Brampton streets late at night. It's the same for this festival-goer, as he may smell like he hasn't showered in a month and is looking pretty sketchy, but nonetheless he'll provide a good time. 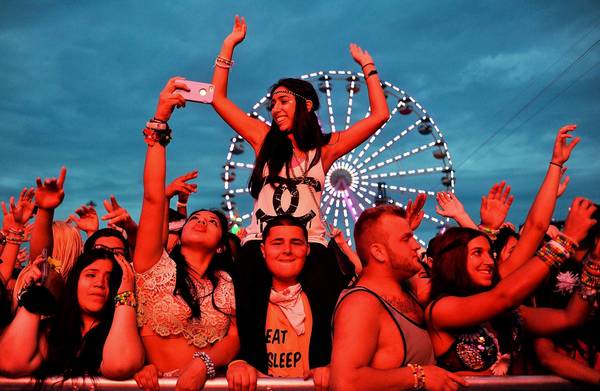 4. Richmond Hill: That Dude Constantly Putting Girls On His Shoulders

You'll see tons of these dudes at any music fest. They are usually slightly burly, with the ability to hold the weight of any girl on their shoulders for an entire show. Realistically that is quite a feat and we can only assume that this guy's shirt reads: "EAT. SLEEP. PICK UP GIRLS AND PUT THEM ON MY SHOULDER."

Instead of going to find his friends elsewhere, this guy brings the party to him. Similarly, those in Richmond Hill are known to complain about their geographical distance from downtown Toronto. "Maybe we don't like having to pay $80 for a cab-ride home and instead you are coming here to party for once!"

As soon as these guys bought their tickets to Veld 2015, they mapped out a 5-month gym plan so they could be as swoll and yolked as possible for three days of shirtless-partying. Furthermore, these guys didn't cut any corners as they look to have recently waxed their chests. Sadly, their pal on the left wasn't so shrewd as he was left to wear his Sublime t-shirt like your everyday, unextraordinary festival-goer. Poor guy.

Londoners and specifically Western students have drawn the ire of nearly all neighbouring Ontario cities and universities as they are known as spoiled party animals. Whether that is true or not is debatable, but c'mon, if these recently-waxed lads don't epitomize the Western University stereotype, nothing does. Just look at the guy in the middle, you know he's thinking: "After this photo, I've GOTTA find my shades." NOTE: they are behind his neck.

6. The Beaches: Those Dudes "Dressed" As Lifeguards

The Beaches is a very popular tourist-attraction in Toronto and would need some lifeguards to watch over, you guessed it, its beaches. This comparison however goes beyond our simple pun, as these guys have no other care in the world, but to show off their bods Baywatch-style. The Beaches in the summer is absolutely gorgeous so who can blame these guys for grabbing some sun.

You have to think that they're wearing their actual lifeguard gear because of course they are licensed lifeguards and get paid $20 an hour. Having grown up in the relaxing and affluent Beaches they are ready to party... but not too hard.

7. Guelph: Those Dudes That Wear Cowboy Hats The Entire Weekend

Even at non-country music fests, you'll find a few people rockin' a flannel long-sleeve and a cowboy hat. We'd like to think that that's just their normal, everyday attire, and hey, if they're from Guelph it probably is. Recognized as a small farming and artistic community, Guelph and its university is well-known for its agricultural sector which is reflected in the impression that everyone there are country-folk.

You will most likely find these specific dudes and/or Aggies, as they are known, at the Boots and Hearts Music Festival drinking a Coors tallboy and discussing the most recent trends from Tractor Weekly. These Aggies need their country-fix with school out for the summer, meaning no Aggie Pubs in the immediate future.

We're looking at you guy on the right. Obviously there is nothing wrong with rockin' a vintage re-release Toronto Raptors jersey, but if that is literally all the pictured culprit has brought or even owns, there is something wrong. Serious fashion faux pas bud.

This type of dude is a close cousin to the aforementioned OVO-adorned Mississauga native, once again proving that there can be too much of a good thing. Just as the OVO-obsessed dude hoped to work his way into the fray and blend into Toronto, this Throwback Theodore from Thornhill wants to do the same. Sorry Theodore, we know you aren't actually from the 6ix, you can go back to eating a shawarma or a bagel and salmon cream cheese.

A music festival is no place for Canadian Goose jackets and Honda Civics, which leaves this concert-goer bored out of his mind. Similar to the OVO fanboy and throwback Theodore from Thornhill, this passed out guy from Markham likes to say he's from Toronto, but does so with less flair. He's plain, just like the GTA suburb he is from, and concedes defeat by grabbing some "zzz's" under some tiny palm trees.

The only thing that'd make this dude more Markham is if he were Asian. Markham is well-known for its large Asian population (nothing wrong with that) and what's more Asian than falling asleep in public. This funny stereotype is so well-known that Reddit even has its own subreddit titled, "Sleepy Asians", with upwards of three-thousand users, Don't shoot the messenger! 10. Scarborough: That Dude High-Fiving Everyone

After seeing Kendrick Lamar destroy his set, or have Hozier take him to church, this dude does not hold back in showing love. He does so by-means of the simple, but effective high-five, offering it to nearly every festival-goer as if he just had some excellent grub from the Rainforest Cafe in the Scarborough TC. You can usually hear him from across the concourse screaming audible "woos" and asking if you can believe "how dope Deadmau5 was?!?"

Having lived in Scarbz all his life, he has gone through both the highs and the lows. All in all he is ready for a good time, especially since he doesn't have to mission home from downtown. Instead, he can just cozy up next to that sleeping dude from Markham.