Some of these look CRAZY. 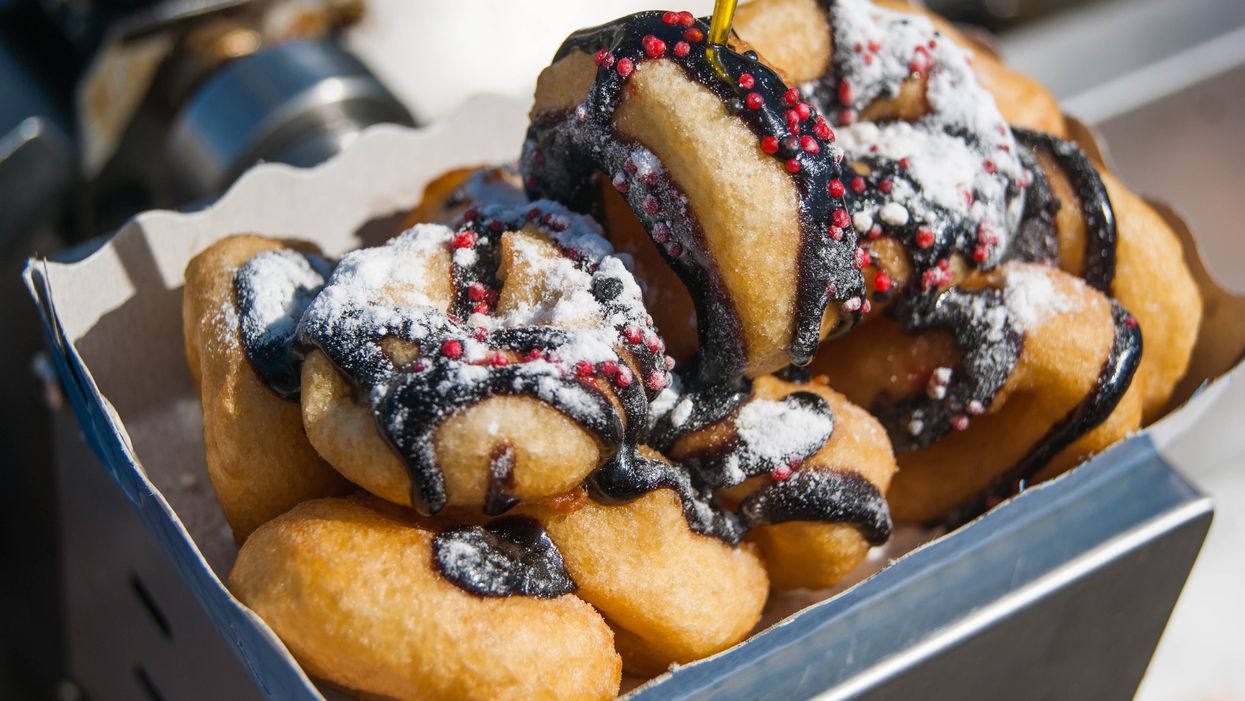 Now that June is here, the countdown to the 2018 Calgary Stampede is getting seriously close, and we're BEYOND excited! Not only has an amazing concert lineup been announced, but there's also so many other things to look forwards to!

I've heard many people say that the main reason they come to the Stampede is the food. Do I blame them? Not at all! Every year vendors come up with some of the most insane, delicious food options we've ever heard of, and we want to try them all!

If you're going to this year's Stampede, you'll want to wear loose fitting pants for sure, because with all these amazing treats you try, you won't be able to stop eating: Grilled Cheese is a classic we all know and love, but what about with crickets on it? Hey, can't knock it until you try it!

Prairie Oysters are an Alberta staple, and this classic twist on them sure is interesting! At this year's stampede you'll be able to order mini donuts topped with prairie oysters and blueberry compote!

3. Giant Squid on a Stick

If you love seafood, you're in for a treat! The Giant Squid on a Stick comes in two flavours: salt and pepper, or curry pepper, and should definitely be on your 2018 Stampede Bucket List!

Crickets seem to be a popular choice this year! Get your sweet with a hint of savoury with the Cricket Caramel Apple!

Perhaps one of the most questionable menu items for this year's stampede would have to be Cheesy Chicken Hearts. They're apparently just the right mix of spicy and crispy, if you're brave enough to try! If you've got a sweet tooth, this guy is calling your name! The sweet, hot donuts pair perfectly with the cool, refreshing ice cream for an amazing summer treat.

Mini Donuts are a must at the Stampede, but if you want to get a little nostalgic with them, try out these mini donuts topped with pop rocks! They're super cute, and delicious!

If you haven't yet tried Chimney Cones, you need to ASAP! These sweet treats are essentially ice cream served in a mini donut cone, and they're to DIE for.

Talk about extreme! These little guys are a serious combination of flavour, bringing together sweet and savoury for an explosion in your mouth!

We all love to eat cookie dough from time to time, and this year at the Stampede, you'll be able to eat it in the easiest way possible; as an ice cream sandwich!

This is basically a glorified peanut butter sandwich, but we're here for it. The Sweetheart consists of peanut butter between two honey crueller donuts, and a surprise peanut butter cup in the middle!

Did you really go to the Stampede if you don't eat your weight in deep fried food? If you're sick of mini donuts, but still want a sweet treat, grab the Deep Fried Pineapple, topped with delicious caramel sauce! If you want to take a cool picture of your food, then this is an obligatory purchase. Coconut flavoured soft serve, infused with activated charcoal! You can get it in a cup, or a cone!

This is another deep fried twist on a classic. Grab yourself some wine infused cake, deep fried and paired with fried cheese curds, and wine jelly for dipping!

This is probably what I'm most excited for. Tater Tots are amazing as is, but throw some kalbi marinated sirloin steak on top and you've got one hell of a food combo.

It wouldn't be the Stampede if there wasn't something unicorn themed on the menu! This giant drink is the perfect soda/bubble tea fusion to cool you off on a hot summer day!

At the Stampede you're bound to be hungover at least once. Treat yourself to this mac & cheese, beer, potato chip, and pretzel combo to help cure you!