"The crack in the glass ceiling has opened." 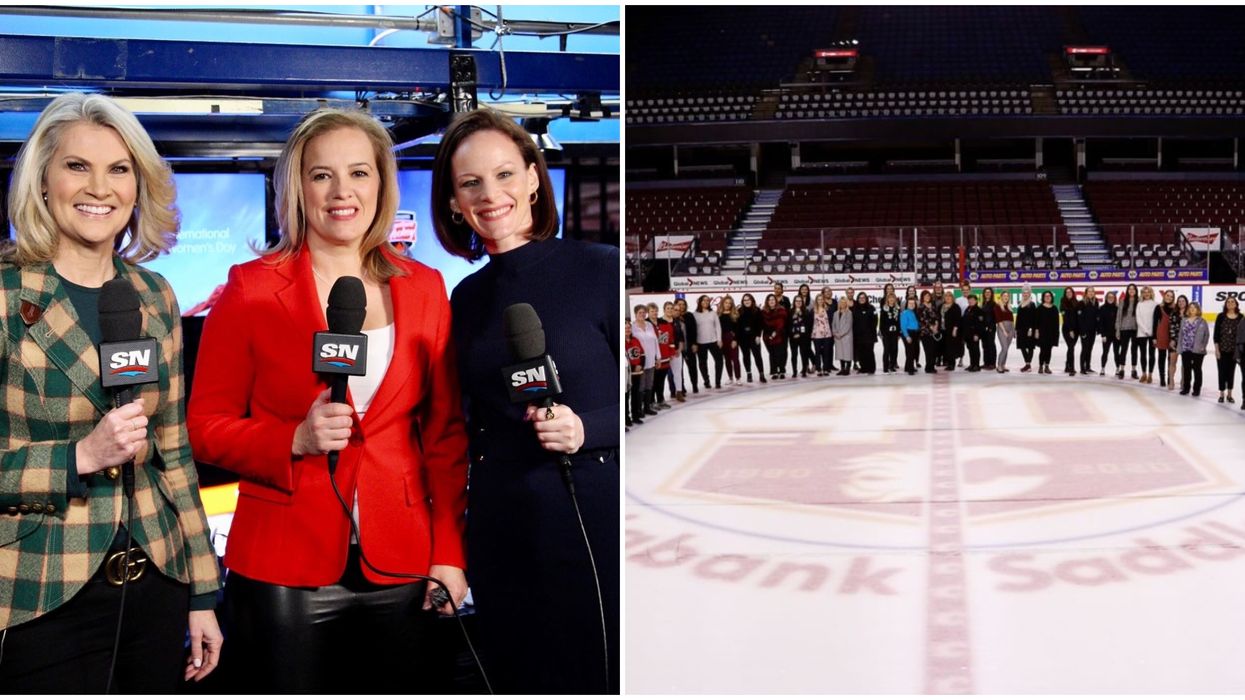 On Sunday, March 8, the internet exploded with posts in celebration of International Women's Day. The celebration even extended into the NHL as Sportsnet put together an all-female broadcast crew for the Calgary Flames game agains the Vegas Golden Knights. The history-making crew covered all bases from the broadcast booth to the sidelines.

“It’s an emotional time for many of us and time to sort of take stock of where we’ve been, where we are, where we’re going,” said Slone.  “In this industry, the crack in the glass ceiling has opened just a little bit,” she continued.

She then went on to introduce the history-making crew. “For the very first time on Sportsnet we are featuring an all-female broadcast crew in front of the camera, many women behind the scenes. So right now it is my tremendous pleasure to introduce you to your game crew for today, Chris Simpson, Cassie Campbell-Pascall, and Leah Hextall at the Scotiabank Saddledome.”

Slone then turned the coverage over to the game crew where we see the three smiling faces that will broadcast the Flames game live in Calgary.

Sportsnet tweeted before the game, showing a video of the “all-female games crew” that would be delivering the game. The big group of women gathered on the ice and shouted “happy International Women’s Day” together.

Chris Simpson, one of the evening’s broadcasters, tweeted with pride on Monday, March 9. “Last night we made history with the first all-female broadcast of an NHL game on Sportsnet and I couldn’t be more proud of @CassieCampbell & @leahhextall & the legion of women in our production & technical crew.  It will forever be a highlight of my broadcasting career,” she wrote.

Last night we made history with the first all-female broadcast of an NHL game on Sportsnet and I couldn’t be more p… https://t.co/g6Z6d4Mb6z
— Christine Simpson (@Christine Simpson)1583762669.0

The post received tons of support. One user wrote “Great job! Enjoyable presentation! In my humble opinion, some of the best coverage I’ve seen in a long time.” Another wrote “U ladies did great...I hope this is a regular occurrence real soon.”

In an interview with the Calgary Sun, Simpson explained that she wants this to be more of the norm and that she believes this history-making game to be the first step in that direction.

Sportsnet shared some photos from the evening, captioning the post "Stick taps to these ladies."

The game resulted in a 5-3 loss for the Flames on their home ice. Though, the energy was high throughout the entire event.

Recently Air Canada had a history-making flight which featured an all-female crew, as well. It looks like everyone was getting in the spirit of International Women's Day.