These fans can't wait for Jolibee to open. 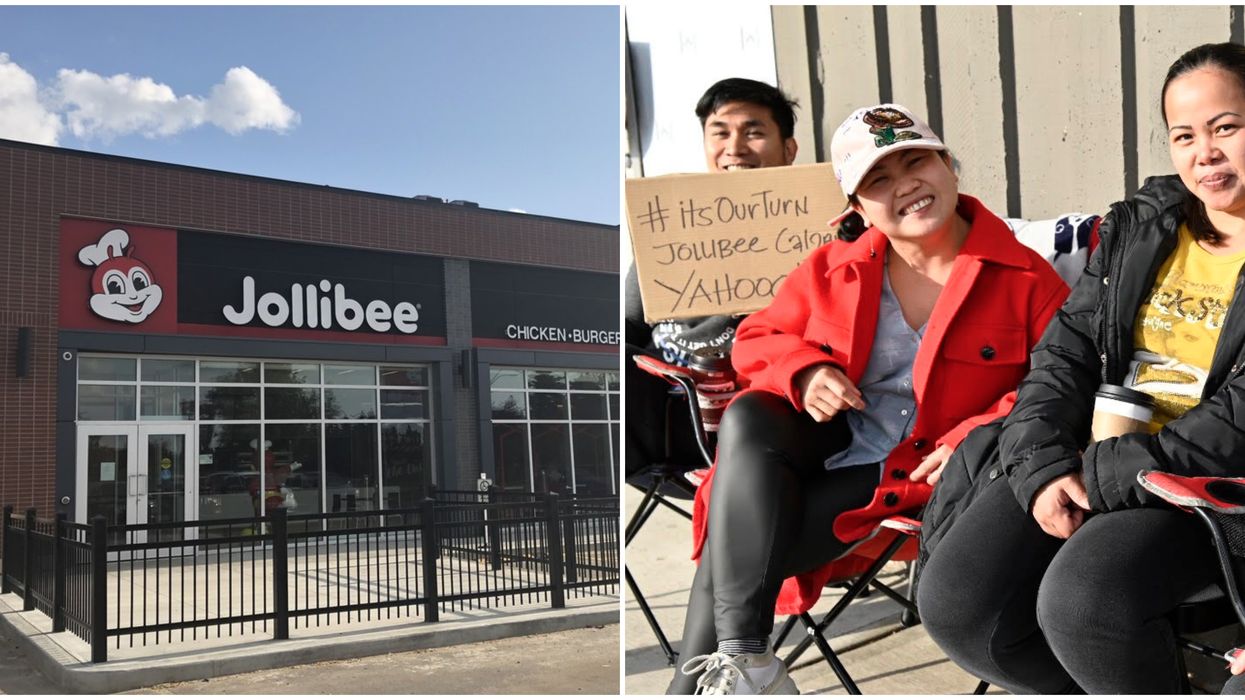 Calgary's first-ever Jollibee is opening on Friday morning at 7 a.m. and the city is buzzing with excitement. Some people are taking to the internet to express their enthusiasm, while others have already started lining up outside the Calgary Jollibee. Seriously, there is already a line outside Calgary's first Jollibee at 999 36th St. N.E.

If you're not familiar with the cult-favourite fast-food chain, here's what you need to know. Jollibee is a Filipino chain that has been absolutely blowing up in Canada in 2019. After locations have opened in Toronto and Edmonton, Jollibee announced their arrival in Calgary, tweeting "It's your turn, Calgary. We're opening! September 20th" on September 11.

Jollibee is known for their Jolly Crispy Chicken, Jolly Spaghetti, Peach Mango Pie, and a whole lot more. With classic chicken buckets and unique Filipino-inspired offerings, Jollibee is something everyone needs to experience.

When Edmonton's location opened, a man was camped out for days leading up to the grand opening. Though Calgarians weren't quite as diligent, they are there now and ready to fill up on Jollibee on Friday morning.

Calgarians are fired up to get in the doors of Calgary's first-ever Jollibee. On Wednesday night at 11 p.m., a local tweeted that people were already camped out in front of the new location. On Thursday morning, a Jollibee representative sent Narcity photos of a few die-hard fans in front of the restaurant.

You better believe it. These excited folks are ready to get in there and get eating. One Jolli-fan holds a sign that reads "#ItsOurTurn Jollibee." You might want to make up your own sign because Jollibee is offering their famous Funko Pop! figures to customers with the most unique banners or posters with the hashtag #ItsOurTurn.

It's a sunny day and spirits are high on the eve of the opening of Alberta's newest Jollibee. The fans that aren't on the location are showing love online.

opening of Jollibee + Sarah Geronimo concert = a great weekend for all the Filipinos in Calgary 😂 https://t.co/iZdOcbCobO
— nickie (@nickie)1568835964.0

People are even offering services as "line sitters" for those who can't make it down yet.

Not only will grand opening attendees be among the first to enter Calgary’s Jollibee, but they will also have the chance to win a year’s supply of chicken. 50 lucky customers will be awarded free chicken for a year, what Jollibee is referring to as “One Year of Joy.” Winners will be able to get a free 6-piece bucket of chicken every month for a year.

People are excited and so are we. We'll be on the scene at the opening tomorrow, stay tuned for updates.

Why You Need To Go: Be one of the first to step inside Jollibee Calgary and maybe even win One Year of Joy.