Unusual But Super Fun Things To Do In Alberta For Cheap

Not your average adventure! 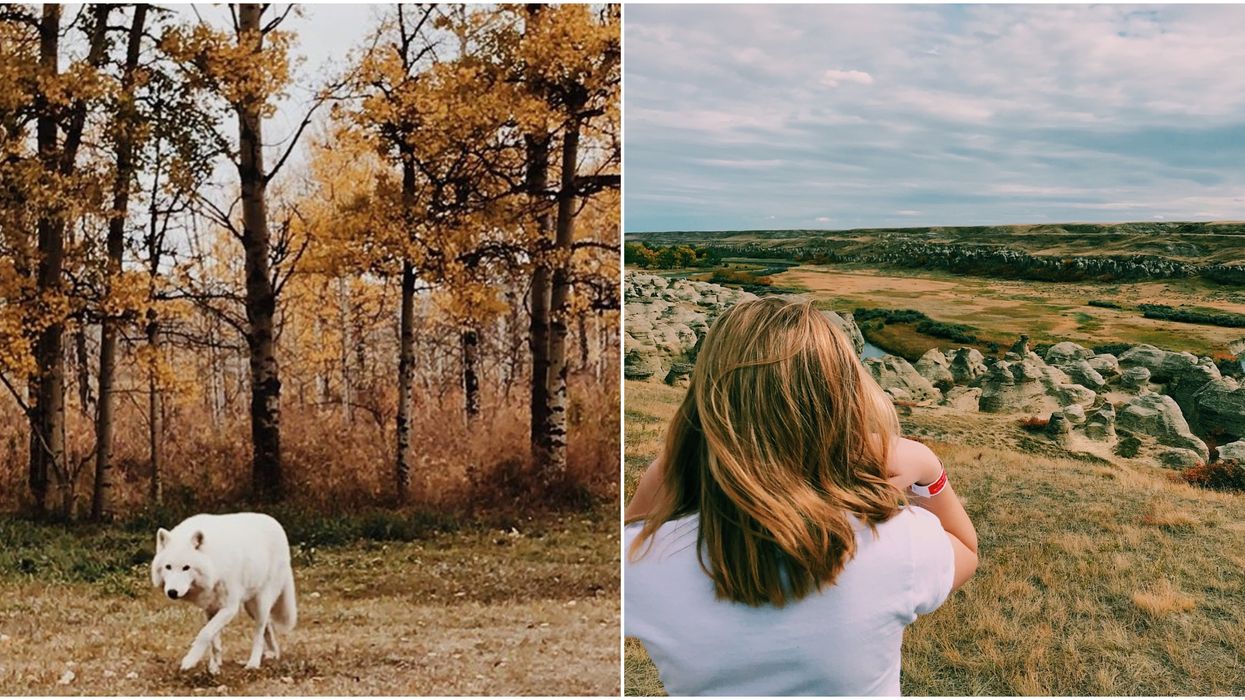 When you've lived in Alberta for long enough, it can really start to feel as though you've done and seen it all. There's only so many times you can make a day trip to Banff or Jasper, shop your way around West Edmonton Mall, or get your yeehaw on at the Calgary Stampede.

What about the super obscure things, though? Have you explored some of Alberta's many ghost towns? Climbed to the top of the World's Largest Dinosaur? Visited the World's First UFO Landing Pad? We could go on... You'd be surprised at the number of obscure things that are just waiting to be explored here in Alberta!

Another thing that may be stopping you from exploring is the cost. We get it - being a student, or an adult isn't easy. Having fun can't always fit into your budget on top of all the other things you have to worry about. Luckily for you, though, a lot of the most unusual and obscure things to do here in Alberta are totally affordable!

We didn't get much of a Fall this year, and all the snow outside your bedroom window may be tempting you to stay inside - but don't let it! See how many of these unusual and affordable things you can cross off your bucket list. Once you've done everything, THEN you can get away with saying that there's nothing else exciting for you to do in Alberta:

Explore the Ghost Town of Mercoal

Not only will exploring a ghost town cost you absolutely nothing, but it's also a ton of fun. The town of Mercoal was once home to over 800 people but is now home to nothing more than a few summer residences. As a formal coal mining town, there's plenty of interesting abandoned spots to check out in Mercoal, and most of them make for super cool Instagram photos. The small town is located about 5 hours from Calgary, and about 3 hours from Edmonton, near Jasper National Park. Climb to the top of the World's Largest Dinosaur

Want to take in Drumheller from the absolute best view possible? You'll have to climb to the top of the World's Largest Dinosaur to get it, but it's worth every step! The dinosaur is 86 feet tall (that's 4.5x bigger than a real T-Rex), and it takes 106 steps to reach the top. Up to 12 people can fit in the mouth at once, and it will cost you just a mere $4 per person to head up to the top. The dinosaur is open from 10 a.m. until 5:30 p.m. daily, so you have plenty of opportunities to check it out!

Vulcan is not only a quaint small town here in Alberta, but it also happens to be home to the famous Spock from Star Trek. If you're a self-proclaimed nerd and love all things Star Trek, then Vulcan is the spot for you. Be sure to check out the Vulcan Tourism and Trek Station during your visit, where admission is free, and you'll definitely leave with more Star Trek knowledge than you came with. Be sure to also keep an eye out for murals around town, as well as the Starfleet insignia strategically placed around town. Take a walk through the Yamnuska Wolfdog Sanctuary In my opinion, wolves are some of the most beautiful animals on the planet - but can you imagine being able to get up close and personal with them? At the Yamnuska Wolfdog Sanctuary, you can. The Sanctuary offers a variety of tours, for a variety of different costs. A simple walk through the beautiful spot will cost you just $24, but an interactive tour will set you back about $54 - the experience is definitely worth every penny, though. The Sanctuary is located near Cochrane, just a 45-minute drive from Calgary and is the perfect spot to spend a fall day outside! Get lost in the Edmonton Corn Maze For most of us, October, or fall in general, means corn maze season! The Edmonton Corn Maze is one of the best you'll find already, and if it isn't already on your bucket list of places to visit with your best friends, family, or significant other, then you should make sure to add it ASAP! Taking on the corn maze will cost you just $12, and it takes about 30 minutes to an hour for most people to complete. You have until October 21st until the Edmonton Corn Maze shuts down for the season, so be sure to make your plans before it's too late! Pay your respects at Frank Slide

Widely known as the most deadly rock slide in Canadian history, there's no denying that Frank Slide is definitely quite a sight to see. Every time I drive past, an eerie feeling comes over me, and I've known quite a few people to feel the same way. To this day, the town, and most of its residents remain buried underneath the rubble and massive rock piles. Admission to the Interpretive Center is just $13 for adults and will teach you a ton about the tragic history of Frank Slide. Have dinner at the top of the Water Tower Grill

You probably already knew about the restaurant at the top of the Calgary Tower, but did you know that the city of Lethbridge also has a restaurant up high? The Water Tower Grill is located in the top of... You guessed it - the city's water tower. Not only is the view from up there one of the best you'll get of the city, but it's also a super classy spot! If you're celebrating a birthday or anniversary, or just want an excuse to dress boujee, you definitely need to make reservations at the Water Tower Grill. The small town of St. Paul may not be known for much, but it IS home to the World's First UFO Landing Pad, which is pretty cool if you ask us. The Landing Pad was built back in 1967 to attract tourists, and aliens, of course. It's totally free to visit, and even if aliens aren't your thing, it's still one more cool thing to cross off your bucket list and tell your friends about! Take in the gorgeous views of Peyto Lake If hiking is your thing, you have to make your way up to the top of the Icefield Parkway. Not only is it a killer workout, but it also boasts the BEST view of Peyto Lake you'll get anywhere. From way up high, the waters look unbelievably blue and make for some seriously amazing Instagram pictures. As some added incentive to go - hiking won't cost you a penny, so you don't have to worry about breaking the bank to have a memorable day. If you find yourself in Calgary, and are looking for somewhere new and interesting to visit, we highly recommend dropping by the National Music Centre! Admission is $18 for adults, or $14 for students (who doesn't love a student discount?! 😉), and they're open from 10 a.m. until 5 p.m. from Wednesday to Sunday. During your visit, you'll be exposed to plenty of Canadian music history, interesting instruments, and cool exhibits like the Rolling Stones Mobile Studio. Being that it's the largest National Park here in Canada, and the second largest in the world, it's a wonder that people don't talk about Wood Buffalo National Park more. Located in northeastern Alberta and the southern end of the Northwest Territories, we get that it might be a daunting drive for some, but the views you get of the beautiful Northern Lights from the park are worth every kilometer you drive. Get a history lesson at Writing-on-Stone Provincial Park

If you want to see first hand the stories of those who roamed the prairies before us, Writing-on-Stone is just the place to do that. Home to hundreds of petroglyphs, dating back as far as 7000 B.C., you'll definitely see some interesting sights and learn a thing or two while wandering through this beautiful park. Many people seem to think that the Rocky Mountains is the only beauty that Alberta has to offer - but that's where they're wrong. The Hoodoos, valleys, and coulees of southern Alberta have a unique charm and beauty to them that is well worth exploring.

A lot of things on this list are probably things you'd never think of doing, but trust us when we say that the most unusual things are often the most times! Take a risk and step outside your comfort zone - you may just find a new favourite activity, meet some new friends, or make some unforgettable memories. Regardless of where you choose to check out, we hope you love it!