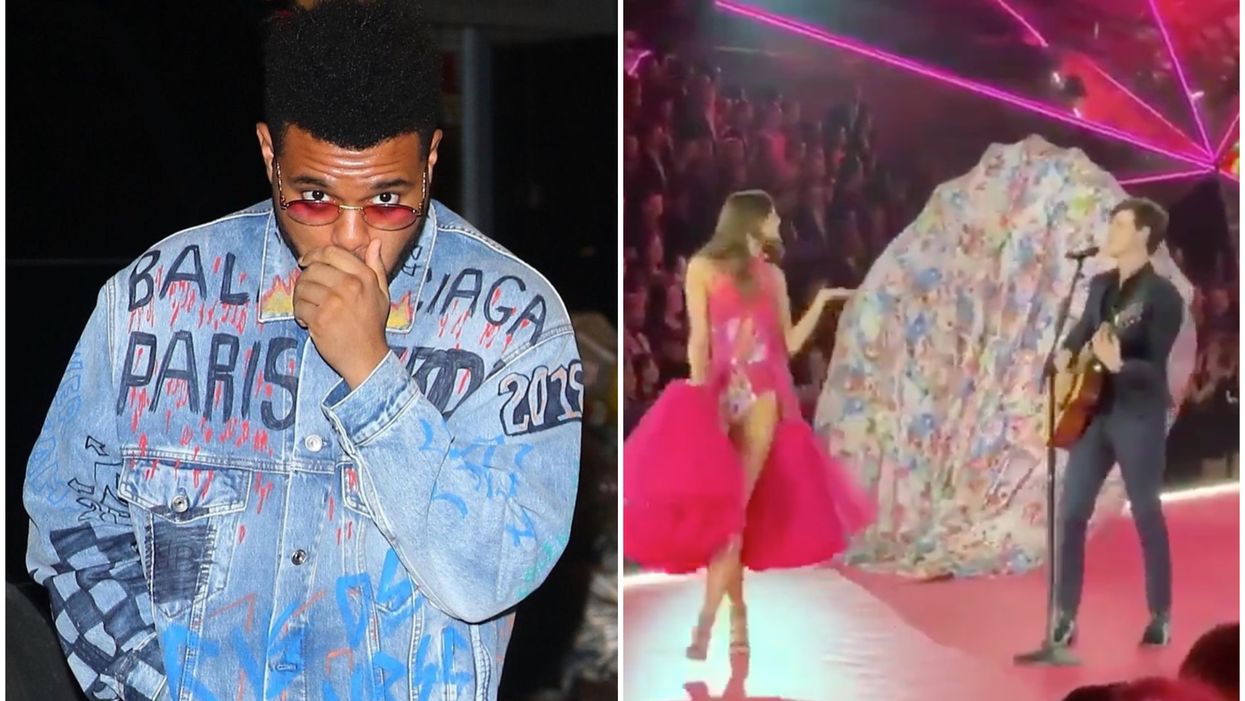 The annual Victoria's Secret Fashion Show took place last night in New York City, and as usual, it had its fair share of drama. So let us tell you everything you need to know about went down.

Repping Canada, we had two celeb singers at the show. The Weeknd was in the crowd supporting his girlfriend Bella Hadid while she walked the runway and Shawn Mendes was performing.

The Weeknd gave girlfriend Bella Hadid a standing ovation every time she walked the runway, according to E! News, and it's the sweetest thing ever. The couple has not been shy about declaring their love to the entire world lately. However, before you get swept up in all the cuteness that is The Weeknd and Bella Hadid right now, let's take a walk down memory lane.

The Weeknd with Yolanda Hadid were there watching our Bella 😍🖤 #VSFashionShow pic.twitter.com/w0wrIarHBb

Back in 2016, the pair also shared the spotlight at the VS Fashion Show. Their encounter, however, was much less sweet and much more awkward. The two had been broken up at that time.

Bella Hadid walked down the runway while The Weeknd was performing and it was pretty awkward. It was the first reunion in public since splitting up. Imagine running into your ex, but in front of millions of people watching. We would like to be excluded from that narrative. Tons of memes about the encounter ensued. Check out this clip of the couple in 2016 and see how far they've come.

Shawn Mendes was another Canadian favourite that made headlines at the 2018 VS Fashion Show. The 20-year-old singer was performing his new single "Lost In Japan."

It looks like even Victoria's Secret Angels have a soft spot for the Canadian singer. One model even tried to kiss Shawn Mendes while walking down the catwalk, according to Seventeen.

Did you catch the kiss @ShawnMendes? pic.twitter.com/soKcmeBiBu

While walking down the runway, Model Sofie Rovenstine found the time to blow Shawn a kiss. Her mood afterwards was captured backstage and she sure was excited, according to Seventeen.

It looks like the attraction was mutual. A fan account on Twitter asked the singer if he “caught the kiss,” and Shawn himself even responded back with "Of course! Haha".

Fans were freaking out over the model's flirtatious encounter with Shawn Mendes, many because the moment was just so relatable. Check out some of their reactions on social media.

. She knows that she represent all the fandomhahahhaha lmao. love her pic.twitter.com/cGbYhSsycz

all envy the body of the models, I envy the kiss that she threw to Shawn. Lol

The Victoria's Secret Fashion Show 2018 will air next month. You'll be able to watch all the drama for yourself unfold on December 2nd.