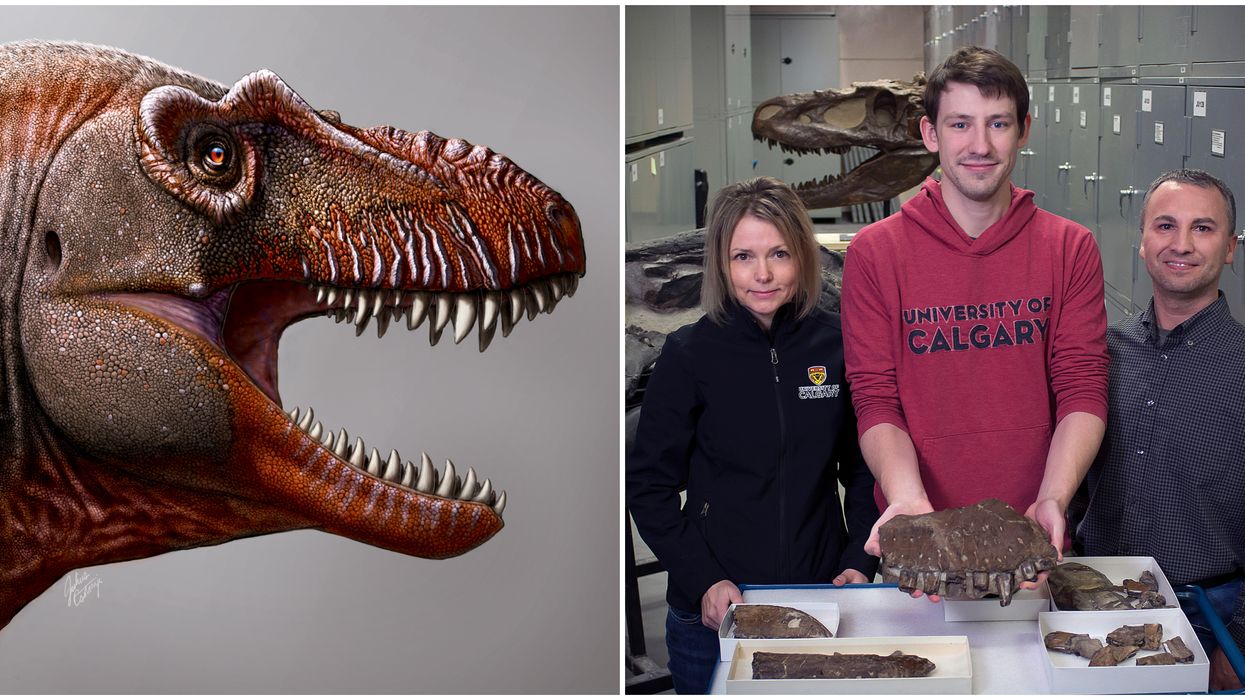 The T. rex has a new relative and it's from right here in the true north. A new Canadian dinosaur species has been discovered and its name actually means "reaper of death". This meat-eating dino is unique in a lot of ways.

This new species, Thanatotheristes degrootorum, is the oldest to ever be found in Canada and the first new tyrannosaur to be discovered here in 50 years.

While on a hike near Hays, Alberta in 2010, John De Groot, a farmer and paleontology enthusiast, found the fossil fragments of a dinosaur's skull.

"The jawbone was an absolutely stunning find. We knew it was special because you could clearly see the fossilized teeth," he said in a blog post from the Royal Tyrrell Museum.

However, it wasn't until February 10 that researchers published a description of this new tyrannosaur species in the journal Cretaceous Research.

Because the fossil skull fragments had unique features like ridges along the upper jaw, they were able to call this a new and distinct species.

Its name is also unique and reflects its apex predator status back in the day. Thanatotheristes degrootorum means "reaper of death."

The first part comes from Thanatos, the Greek god of death, and theristes, meaning one who reaps or harvests. The second part is less ferocious and honours the De Groot family, the ones who discovered the fossils in Alberta.

It stood 2.4 metres tall at the hips, which is about 7 feet, eight inches, and was as long as two cars lined up from bumper to bumper, according to the CBC.

When dinosaurs roamed the earth, tyrannosaurs were a group of large meat-eaters that included the famous T. rex and now Thanatotheristes degrootorum.

The fossil skull fragments show that this long-snouted lizard-like creature had lots of teeth which makes sense with its diet.

"This discovery is significant because it fills in a gap in our understanding of tyrannosaur evolution," said François Therrien, curator of dinosaur palaeoecology at the Royal Tyrrell Museum, in the blog post.

It also shows that the tyrannosaurs that roamed Alberta during the Cretaceous period were more diverse than previously thought.

There are only four other known tyrannosaurs here in addition to Thanatotheristes degrootorum and most of the dinosaur species from Alberta are from 66 to 77 million years old.

Canada is also home to the largest known T. rex in the world whose name, Scotty, is far less terrifying than "reaper of death."