The GIFs tell it all. 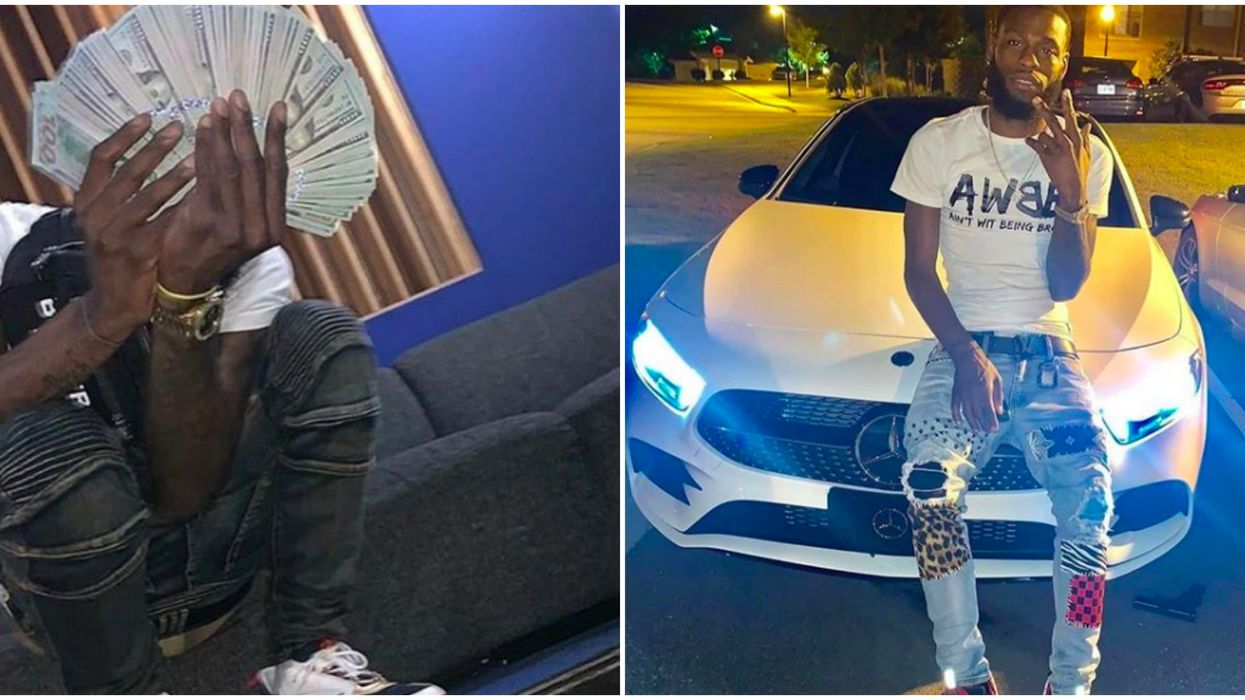 An aspiring rapper from Charlotte stole from a bank and it's the talk of the Internet because people are seriously baffled. The 29-year-old collectively stole loads of cash from a Wells Fargo bank vault in Charlotte and decided to flex his mad stacks on social media. Needless to say, he was caught and incarcerated and Twitter is responding in the most hilarious ways with GIFs that say it all.

Arlando Henderson is an up-and-coming rapper who also doubled as a banker at Wells Fargo in Charlotte where he was (ironically) hired to guard the cash vault. Well, those days are over because he has collectively stolen $88,000 from the vault within the past eight months.

According to a Hollywood Unlocked report, Henderson has been charged with over 30 counts of theft, embezzlement and other financial-related crimes. He could face up to 30 years in prison with $1 million in charges.

According to an indictment obtained by the Charlotte Observer, he began his heist by taking small amounts of money. We guess the ease of getting away with it at first got to his head because he began stealing thousands at a time, reaching over $13,000 in just one day.

He destroyed bank documents and manipulated data to cover up the theft. We can't decide what's more sketchy: the fact that he deposited massive sums of money through an ATM all at once or that he flexed loads of cash on social media.

We also cannot forget the $20,000 down payment he put on a brand new Mercedes Benz earlier this year.

Either way, Twitter is coming in hot with the hilarious GIFs that basically sum up the majority of everyone's reactions.

This user went ahead and said what many others are thinking, using Cardi B's sassy attitude shown in a GIF captioned "you got damn fool!"

And of course, DJ Khaled's notorious advice was bound to come into play. This user posted a GIF of Khaled saying "The key is don't play yourself. That's it, very simple. Dont. Play. Yourself." Guess it's not as simple as we thought.

This user posted a GIF of the "hide your kids, hide your wife" viral YouTube sensation stating, "You are so dumb." They got straight to the point here.

Some people are just finding the whole situation completely humorous.

Like this reaction of a woman sipping from a mug and spitting it out because she's laughing so hard.

Currently on social media Henderson's acquaintances are pushing to have him freed. He reposted several supportive Instagram stories that he added to his own.

If you want to score cash (legally), check out these 7 high-paying jobs in North Carolina. If you want to spend a few dollars you earned (legally we're hoping), you can actually fly from Charlotte to Miami for only $86 roundtrip through spring.

The Tar Heel State is chock full of adventures just waiting to be crossed off your bucket list. Before the weather cools off, head to Sliding Rock in North Carolina to experience a "natural water park." You can glide down a giant nature-made water slide at this super fun spot and channel your inner kid.

Sliding Rock is a hidden gem tucked away in Pisgah National Forest, surrounded by gorgeous scenery. There, you can discover a large rock waterfall among the trees.

There's a cottage nestled in the Appalachian Mountains that's the ultimate fairytale dream. You can stay in this magical North Carolina Airbnb this fall and live like Snow White for a weekend. Bring your S/O for a spellbinding getaway deep in an enchanting forest in Asheville.

This treehouse Airbnb tucked away in the North Carolina mountains is a peaceful glamping experience. You and your boo will feel like you've stepped into a storybook at this incredible place.

There's a secret path that winds through the Appalachian Mountains that looks like a real-life fairy tale. Craggy Pinnacle Trail twists and turns through a forest hidden on a misty mountainside. You can embark on this enchanting North Carolina hiking trail and feel like you're in a storybook.

This gorgeous spot belongs at the very top of your hiking bucket list. You'll be treated to a picturesque journey through the mountains of the Tar Heel State, so be sure to take plenty of photos.