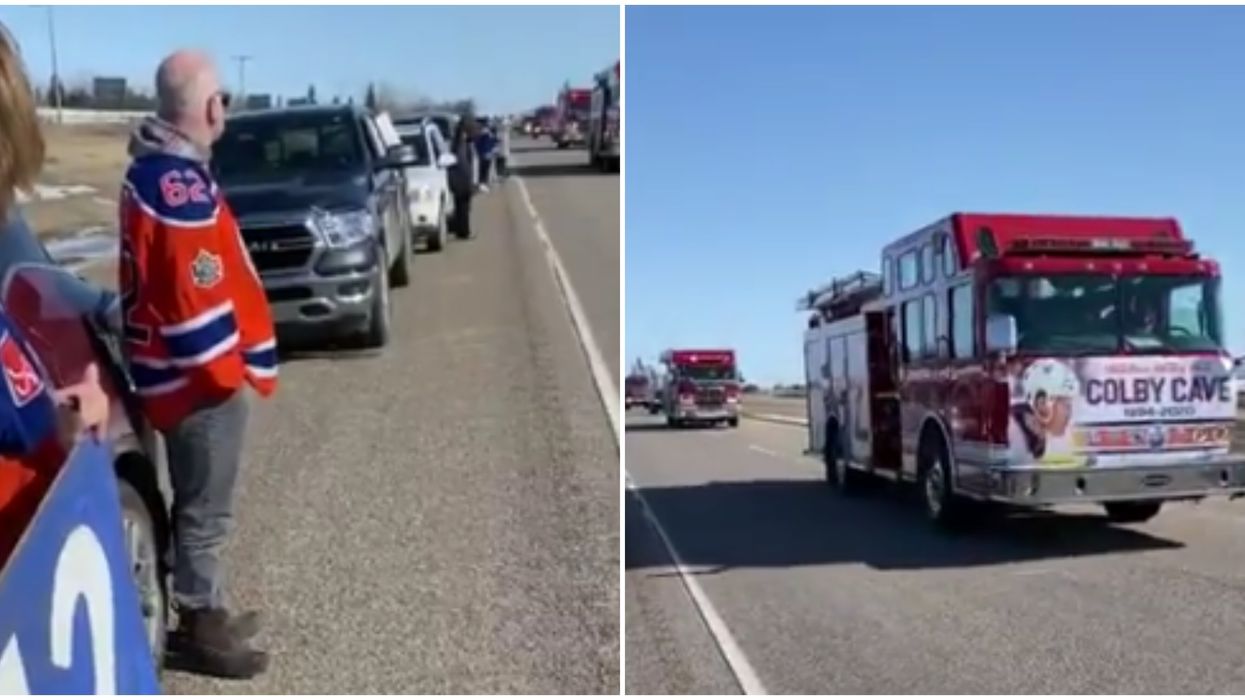 Hockey fans practiced social distancing in the most heartwarming way in Saskatchewan for Colby Cave's memorial. The event filled a highway with 15 kilometres of cars lined up to remember him and show support for his family near Battleford. The love for the young Edmonton Oilers player is extraordinary.

On Tuesday, April 7 Colby was put into a "medically induced coma medically-induced coma...after suffering a brain bleed," according to the Edmonton Oilers.

Sadly, he passed away a few days later on April 11 after having emergency brain surgery to remove a cyst.

He was just 25 years old and leaves behind a wife, Emily, who remembered him in a heartbreaking Instagram post.

The Edmonton Oilers said that "Colby was a terrific teammate with great character, admired and liked everywhere he played."

On Monday, April 13 tons of people from Cave's hometown of North Battleford, Saskatchewan, came out in their cars to remember Colby and show support for his family.

Soon, social media and Twitter was flooded with photos of a line-up stretching out far towards the horizon.

Thousands of people gathered to mourn Cave's passing by gathering together in the only way they can now.

Supposedly there is 15km+ of cars lined up outside Battleford right now waiting for the family of Colby Cave. A h… https://t.co/KO2deeVTqv
— Eric Gryba (@Eric Gryba)1586812236.0

"Supposedly there is 15km+ of cars lined up outside Battleford right now waiting for the family of Colby Cave," wrote Gryba on Twitter. "A heartbreaking and heartwarming time."

It's been a heartbreaking few weeks for the NHL, from the season being cancelled to this latest event. However, it just goes to show the fans' resilience in the face of so many trials.

Cave played for the Boston Bruins, and later for the Edmonton Oilers. He was clearly beloved by thousands and greatly admired by all his teammates.