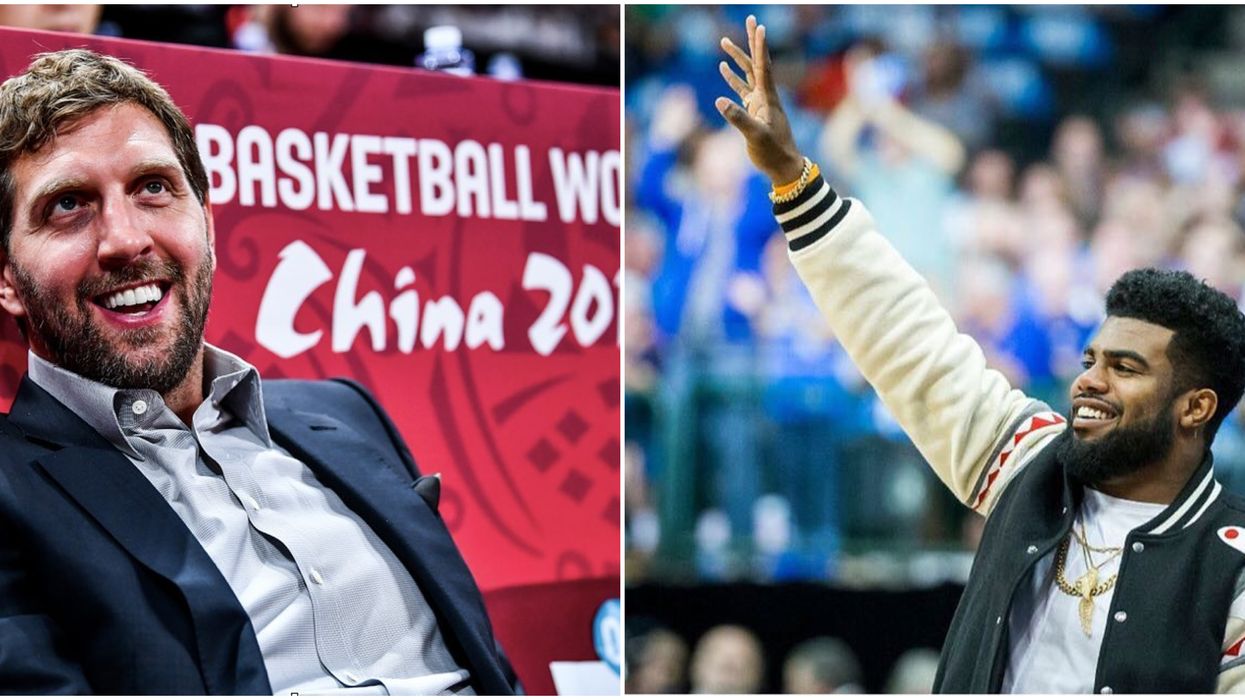 Dirk Nowitzki is incredibly loved in Dallas, so much that streets were even renamed in his honor. The former Dallas Mavericks star has been in China and was surprised to see tons of cameras at the airport. Unfortunately, they were not there for Dirk Nowitzki but for Ezekiel Elliot.

Nowitzki tweeted staying he felt like he still had it before realizing that the cameras and reporters were waiting on Elliot. It wasn't long before Twitter was flooded with messages telling the basketball star that he still got it and all of Dallas still cares. Elliot even replied to the tweet with crying emojis. Nowitzki, originally from Germany, has adopted Dallas as his home and was even wearing a Dallas Cowboy's hat when arriving at the airport (go figure).

The former Dallas Mavericks star was on his way home from attending the 2019 FIBA Basketball World Cup. Nowitzki is no stranger to winning over Twitter and we can assure him he still has plenty of support in Dallas.

Elliot has been all over the news and it just so happens he flew in at the same time as the Nowitzki. Elliot has been holding off on signing an extended contract with the Dallas Cowboys but is in town to make negotiations. Dallas has been holding its breath waiting for Elliot's official return to the team, with the team's season-opening game coming up on September 8.

And while Zeke might be taking the spotlight, we can be sure that Dirk will be in full support as he loves all Dallas sports teams. In the meantime, everyone can show Nowitzki just how much his fans still appreciate him.

While you wait for the games to kick off, and hopefully a Zeke/Dirk encounter, you can check out what Dez Bryant had to say about the ever-famous Popeye's chicken sandwich.

Calling All Soccer Fans, Here's How You Can Watch The Premier League For Free In Canada

Cheer on your favourite team in HD! ⚽

After a thrilling Euro 2020, we can all get excited again because the Premier League starts tomorrow, Friday, August 13 and you can stream every single match live in HD when you sign up for DAZN.

The Newest Raptors Player Has Just Apologized After Dissing Toronto

"I would like to apologize. It didn't come out the right way."

The Toronto Raptors' newest player is now apologizing after he was caught dissing the team in a past interview.

Goran Dragić issued an official apology on Monday evening after a video of him saying he has "higher ambitions" than playing for Toronto circled around Twitter.

"Toronto is not my preferred destination."

It looks like the Toronto Raptors' newest player is already ready to leave the team. According to TSN, Goran Dragić, has "higher ambitions" than the 6ix.

The team's newest addition, who the Raptors received as part of their trade with Miami for Lowry, appeared less than enthused at the thought of playing in the 6ix during a recent interview.

Justin Trudeau, Serge Ibaka and John Tory are all paying tribute to the 'GROAT.'

It's official — the Toronto Raptors' star player, Kyle Lowry, is parting ways with the 6ix after nine seasons with the team.

On Monday, August 2, Lowry took to his social media to announce his departure from the Raptors to move down south to the Miami Heat. According to the Associated Press, Lowry has signed a three-year deal that's worth about US$90 million in a sign-and-trade that will bring Goran Dragic and Precious Achiuwa to the Raptors.