The mandatory stickers have proven unpopular before even going up. 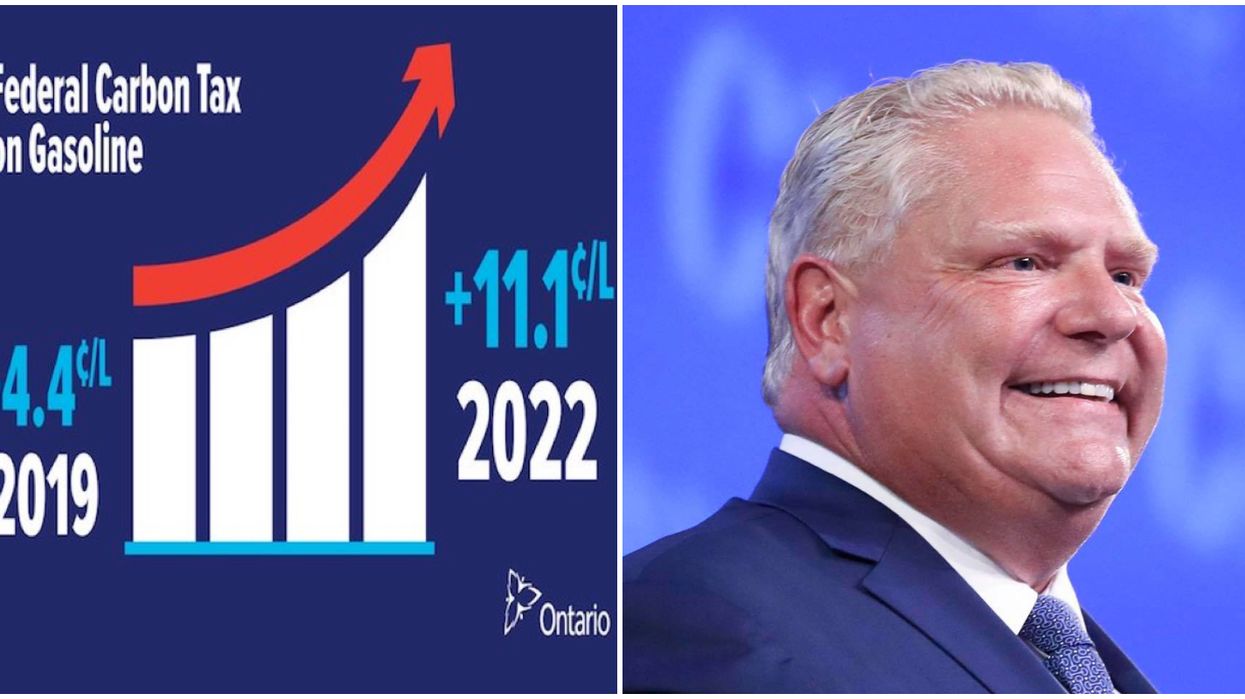 Doug Ford's gas stickers slamming the federal carbon tax must go up by Aug. 30, or gas stations will have to pay fines of up to $10,000 a day. However, the new rule developed by the Ontario PC Party will be facing a legal challenge from the Canadian Civil Liberties Association (CCLA), who claim that the stickers and fines violate the Chart of Rights and Freedoms.

Michael Bryant, the chief counsel for the CCLA, told the Toronto Star, "Fining dissent and compelling speech is a draconian, unconstitutional slap in the face of people and businesses forced to comply, or else."

The news that Doug Ford's unpopular sticker plan will be challenged in court seemed to hit many Ontario residents just right. "The stickers are probably the most stupid thing I've seen from a politician in my 70 years and I've witnessed a lot of doozies," wrote one Twitter user.

"Someone has to stand up to him and his ridiculous dishonesty and wastefulness," wrote another. And there were plenty more replies like those.

@CityCynthia @johncatucci Good! Someone has to stand up to him & his ridiculous dishonesty & wastefulness.
— Colleen (@Colleen)1566330085.0

@CityCynthia @CityNews The stickers are probably the most stupid thing I've seen from a politician in my 70 years a… https://t.co/jQ3Jt1TbgS
— Bob Heaslip (@Bob Heaslip)1566334236.0

@CityCynthia The stickers are #CPC propaganda that is incomplete & missing the completeness of facts. The #PCPO is… https://t.co/Pt7iJO33ZU
— Daniel Doyle (@Daniel Doyle)1566353498.0

One user pointed out that these stickers are coming at an odd time, considering that environmental groups just had their advertising opportunities limited by Elections Canada.

What makes the situation all the stranger is the content of the stickers themselves. The graphics show that while the carbon tax cost 4.4 cents per litre now, it will cost 11 cents per litre in 2022.

What they don't show, however, is that the carbon tax makes up the smallest percentage of the overall price of gas. That information is freely available on the Ontario Environment and Energy website.

In fact, gas station owners proposed an alternative sticker to the government's displaying all of this information in a pie chart. "We actually proposed an option to the government that disclosed everything that goes into the price of gas," Jennifer Stewart, president and CEO of the Canadian Independent Petroleum Marketers Association, told Maclean's.

"The crude price, the wholesale price, the marketing margin, taxes, both provincial and federal, and, where applicable, how some municipalities impose their own gas tax."

The provincial government turned that offer down, probably because it doesn't illustrate the point that they want to make about the carbon tax.

The court challenge to Doug Ford's sticker plan could end up delaying the rule, at least while the case is in court. However, this is a premier who has proven he is willing to use the notwithstanding clause whenever it suits him, so there's no telling when Ontarians will start to see these stickers at the pumps.