Was this a party or a peacekeeping mission? 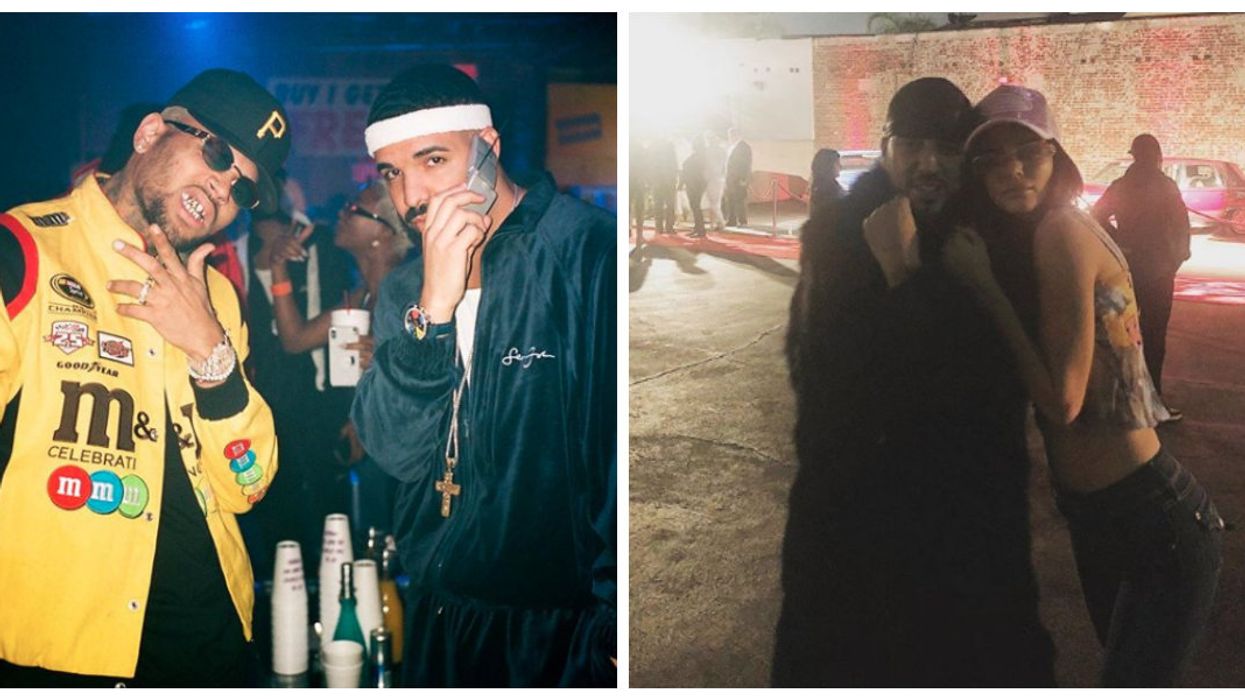 Drake hosted an absolutely epic party in LA last night for his 32nd birthday. Unfortunately, I didn't get an invite. But, living vicariously through celebrity IG stories is almost the same as being there, right?

READ MORE: A Guide To Living Like Drake In Toronto

The theme of the night is something all millennials can appreciate - the 2000's. As you can probably guess, the Canadian rapper went all out. The party was complete with a Blockbuster Video wall, a mini 7-Eleven complete with snacks and Slurpees, cars from the MTV show Pimp My Ride and attendees rocking their best 2000's attire.

Even Kendall Jenner showed up, in the most on-point 2000's-inspired outfit we've ever seen:

Speaking of attendees, Drake's guest list had fans tilting their heads in confusion. Pals like G-Eazy, French Montana, Diplo, Jordyn Woods and Swizz Beatz showed up, but so did a few frenemies including P.Diddy and Chris Brown, most notably.

First of all, does anyone recall the brawl between Drake and P. Diddy in Miami back in 2014? The fight took place at a nightclub and it was reported that Drizzy ended up in the hospital with a dislocated shoulder.

Rumours swirled that the conflict may have been over Diddy's on and off again girlfriend, Cassie. However, it was also speculated to be over the fact Diddy called out Drake for stealing his beat for the song "0-100".

Four years later and that beef seems to be totally squashed. They two looked very buddy-buddy at the party last night. Drake was even rocking a navy blue sweatsuit by Diddy's clothing line, Sean Jean.

Clearly, a woman isn't enough to get between Drake and one of his bros. He and Chris Brown were also spotted hugging it out last night. Brown was on and off with pop star Rihanna for years. Who could forget the horrific assault case of 2009 when Brown got physical with her during an argument.

READ MORE: Can You Guess Which Girlfriend Belongs To Drake Or Justin Bieber?

When their relationship finally fizzled out for good, Drake was there to pick up the pieces. While Drizzy and RiRi were never an official item, they were the target of dating rumours for years. Drake even professed his love for the singer at the 2016 VMAs. However, it never happened for the two of them.

According to Rihanna in an interview with Vogue earlier this year, she and Drake are no longer friends. He and Brown, on the other hand, seem to be solid.

Kendall Jenner was another unlikely guest at the birthday party. Her invite is strange because Drake isn't exactly on the best term with the Kardashians right now. Or, should I say the Wests. Kanye recently called Drake out for his song "In My Feelings" and his infamous KeKe lyrics.

Since Kanye thinks everything is about him, he obviously had to point that his wife's Kim's nickname is Kiki. Therefore, he came to the conclusion that Drake was somehow bragging about hooking up with Kim in the past.

Kim denied the hookup rumours but Kanye still seems a little salty over it all. Clearly, none of the drama matters to Kendall. She showed up to the party looking very 2000's Britney Spears in a bedazzled Von Dutch hat and hip huggers. She and other ladies attendees even went home with $5,000 Chanel handbags as party favours.

For Drake, his 32nd birthday seemed to be all about partying it up 2000's style and sweeping past beefs under the rug. Happy Birthday, Drizzy. Maybe you could throw us an invite next time.