All The Celebs You Completely Forgot Drake Dated Before Kylie Jenner 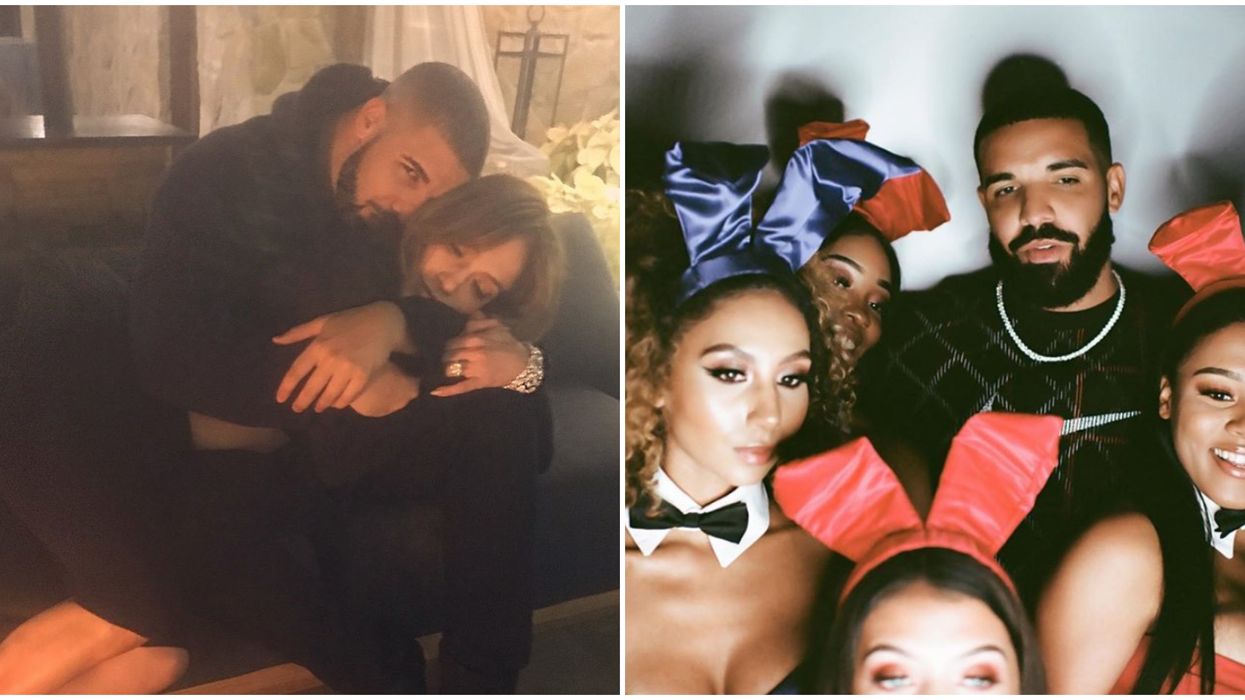 Plenty of rappers have earned the reputation of "playboy" or "flirt", and even though they deny it, when you look at their relationship track record, the rumours usually prove themself to be true. For example, Drake's dating history over the years shows that he's been linked to plenty of women throughout his career.

Most recently, rumour has it that Drizzy has linked up with the youngest member of the Kardashian-Jenner clan, Kylie. Jenner has been with her baby daddy Scott for years, but the pair announced that they're "taking a break" earlier this year, although they've still been co-parenting their daughter, Stormi.

Nothing between Jenner and Drake has been confirmed by either party, although sources close to them have said that they're spending lots of time together and it's a "no strings attached" sort of situation, so it doesn't sound like the relationship (if that's what you'd call it) is too serious.

From the beginning of the decade to now, he's been linked to plenty of IG models, as well as others in the music industry. Since the year is coming to a close, what better time to reflect on the Canadian star's past?

Drake and Nicki first started rumours about their relationship at the beginning of the decade when they both signed to Lil Wayne's label, Young Money.

Over the years they've penned plenty of flirty lyrics about one another, and at one point Drake even said he wanted to marry the "Anaconda" singer. Things were never meant to be between the pair though, as Minaj married Kenneth Petty earlier this year.

Drizzy was linked to British singer Rita Ora back in 2012 after he wrote her single "R.I.P.". Ora then appeared in his "The Feeling of Pain" music video, where you could definitely see the obvious chemistry between the two.

Nothing was ever officially confirmed by either party, but they sure did spend a lot of time together back in the day and according to The Sun, they were even spotted kissing backstage at his show.

Alexa, play "The One That Got Away" by Katy Perry. Drake and Rihanna had a very on-again-off-again relationship over the years, but through their ups and downs they put out tons of awesome tracks like "What's My Name?" and "One Dance".

Back at the 2016 VMA's, Drake professed his love for the Fenty CEO, but when Rihanna admitted that she found his confession "awkward", it was pretty established that their relationship was over. She's now dating Saudi businessman Hassan Jameel.

Back in 2013, the 6ix God had a moment with actress and singer Zoe Kravitz. The pair were seen getting close at a Beyonce concert and later started appearing in one another's IG photos.

Kravitz confirmed that she and Drake were an item at one point, using words like "sweet" and "cute" to describe the rapper. Things may not have lasted between the pair, but they did rekindle at the 2018 Golden Globes.

Blac Chyna may now be the mother of Rob Kardashian's child, but at one point, she was Drake's boo thing. In 2014, Drizzy got into a Twitter fight with Chyna's then-boyfriend Tyga, during which he claimed to have "smashed" Chyna.

The reality star then uploaded a provocative photo with the caption "Miss Me... #neverforget" and tagged Drake, who she's been spotted at clubs with a few times in recent years since her split from Kardashian.

It's no secret that Drake loves sports, but when he showed up at a number of Serena Williams' tennis matches from 2011 to 2015, people started to wonder if the duo were more than just friends.

Nothing was ever confirmed about their relationship, and it looks like it never will be as Williams is now married to the founder of Reddit, Alexis Ohanian.

Next on the list is India Love, who Drake was linked to back in 2016. According to Bossip though, the relationship was all a publicity stunt to gain more attention for Love, so things didn't last between the two.

Of all of Drizzy's exes, this one may be the most surprising. In 2016, Drake suddenly started spending a lot of time with J.Lo, and before you know it, the pair were sharing snuggly photos with one another on the 'gram.

Drake even penned some lyrics about the Hustlers star on his track "Free Smoke", writing "I drunk text J.Lo, old number so it bounce back." The pair didn't last too long, but it certainly caught the world's attention.

You may not have known the name Sophie Brussaux before, but if you're a Drake fan, you probably do now. The French-born artist was liked to Champagne Papi back in 2017, and as it turns out, they only hooked up twice before Brussaux wound up pregnant.

They're not together anymore, but they do co-parent their two-year-old son Adonis together, so clearly they have an okay relationship.

Jorja Smith was the opener for Drake's "Boy Meets World" tour back in 2017. Fans have theories that the single "Jaded" might be about the British singer, but nothing has been confirmed for sure.

Drake first took an interest in Raye for her songwriting skills while working in the U.K., but the two quickly found themselves spending a large amount of time together. Whether the time spent was romantic or not it was never confirmed, but we wouldn't be mad if it was.

Back in May of 2018, Drake was spotted exploring the 6ix with IG model Malaika Terry. To add even more fuel to the fire, Terry was also using a ton of the rapper's lyrics as her Instagram captions, which gave fans the idea that the pair was getting pretty hot and heavy.

Finally, Drake and Stefflon Don sparked dating rumours in November of 2018, after exchanging some flirty banter on the Canadian rapper's IG live stream. The pair then went to dinner together, but it was never confirmed if they're an item or not.