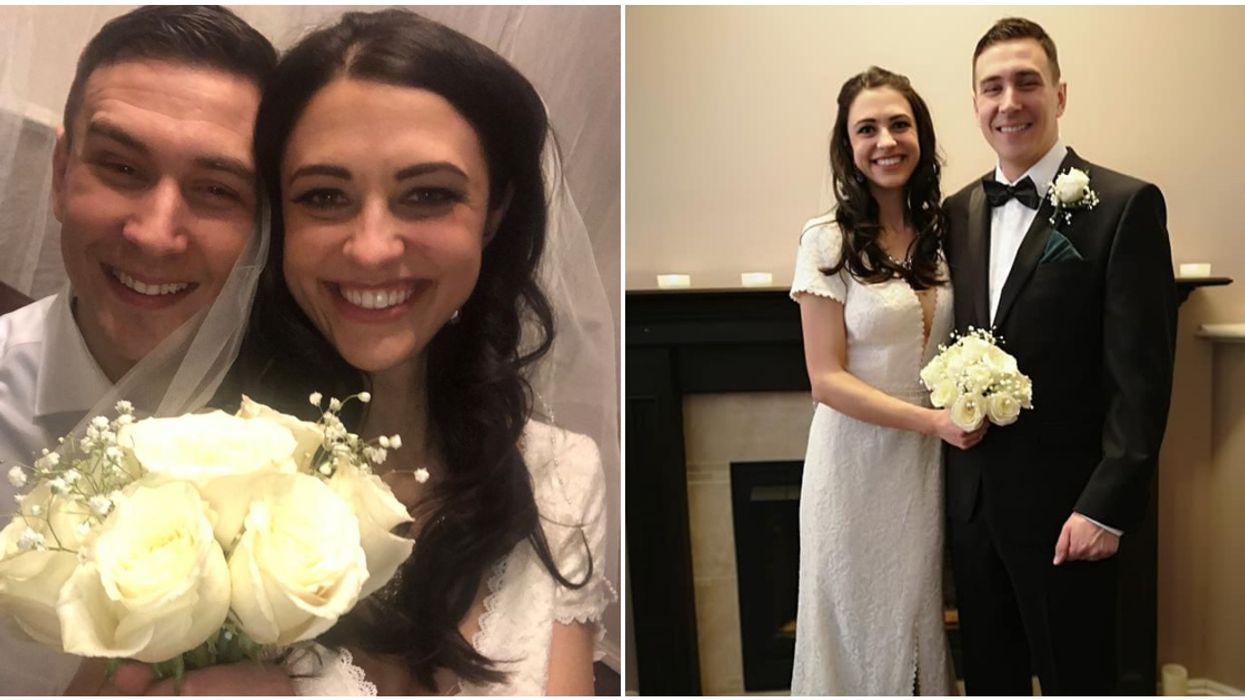 Be prepared for one of the cutest love stories of 2020. After an Alberta couple realized that the wedding of their dreams had to be postponed due to COVID-9, they decided to get married at home. The Edmonton wedding was small and is totally on-brand for social distancing.

Nothing will stand in the way of love, not even the COVID-19 pandemic.

Judy and Scott Slade are an Edmonton couple who planned to marry on March 21 in Las Vegas.

After getting engaged on the November 1, the happy couple began planning their ceremony and writing their vows.

The plan involved a five-day trip for them and their loved ones that was supposed to make for the ultimate wedding.

While it looked promising, things began to take a turn following the bachelorette party, on March 7.

Businesses were shutting down because of the pandemic, and on March 12 the duo began to become concerned for the safety of their guests.

"We decided the right thing to do was to just cancel the wedding in Vegas and go alone. We still really wanted to be married and were excited to go to Vegas,” said Judy in an interview with Narcity.

“A few friends said they would still come, so we got excited about a more intimate occasion for our big day.”

The following day, Judy learned that if she or anyone travelled out of the country, they would have to go into a two week mandatory self-isolation period.

It was then that the couple decided to cancel the wedding altogether.

“I was devastated. We came to this decision while driving home from Fort Mac and I just sat in the passenger seat and cried. Scott was trying to cheer me up but I was just really sad. I wanted to be married, but I didn’t have it in me to plan another wedding anytime soon,” explained Judy.

The following days were understandably hard for the couple, and Judy spent most of her time crying. But Scott came up with a plan.

On March 17, Scott came into the room and told Judy that they could get married that day, and he could call a service and have someone come down to the house to marry them.

“I started to get my makeup and hair done and Scott went out to get decorations, and he surprised me with the most beautiful bouquet of white roses,” said Judy.

After calling two friends to witness, the social distancing wedding at home was on.

Judy describes a perfect wedding and remembers the room being filled with roses and lanterns hanging from the ceiling.

Just because it was an at-home wedding, doesn’t mean the couple missed out on anything. The day was filled with all the traditions a wedding typically has, including a walk down the aisle and vows.

“I walked down the aisle he created in our living room and saw Scott’s eyes well up in tears and beam with happiness,” explained Judy. “We said our vows, kissed and then we were married.”

The romantic ceremony was followed by an A&W Chubby Chicken meal. Goals.

“I just felt like the luckiest girl in the world. I was about to marry a man who loves me so much, and who is so creative and clever that he made a whole wedding for us in just four hours.”

The two are now having their honeymoon indoors, and are loving every minute of it.