It's no secret that Centennial High School was (very arguably) the most lit school in all of Calgary.  Of course, we had our moments and at times we possibly tried too hard: i.e. the "YOTES Swag" shirts that everyone obviously wanted to rock to gain some street cred on Sun Valley Boulevard.

The school was good and the people were better but it did definitely have a few issues that left us all wondering "what is this school?" and feeling like you're in an American high school tv show. Though we all complained about it, we all secretly loved going there.

Could be worse, we could go to BOB. Just kidding BOB, I loved hanging out on your school grounds after school. It's just a shame you didn't get to witness the Centennial litness.

Note: These are things that mostly affected those who went to Centennial between 2012 and 2014. The school has been around for a while and will obviously undergo some changes!

You were friends with the Centennial Coyote on Facebook.

And even if you no longer go there, you still are.

There is constantly random acts of dancing.

And you wondered if other schools were like this.

You remember that one time we were famous. 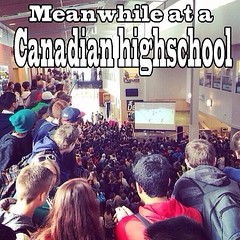 Everyone had some form of "Cent" attire from the Den.

The kids that worked at the Den were always cool AF though!

Constantly forgetting that our timetables switch daily and walking into your "third-period" class and realizing you're not in this class.

"She doesn't even go here!"

You remember the "kissing booth"

Seriously, though, what kind of school has a kissing booth?

You always wondered what the point of YOTES was.

You barely talked to anyone in your YOTES.

You barely went to YOTES.

There was always someone complaining about how slow people walk in the hallways.

Trying to skip class and running into Dr. Christison.

Just running to the bathroom... with my binder and textbook and all my stuff...

You always wondered why instead of having to make an appointment with your guidance counsellor because there's like 1800+ kids, they'd hire more than 3.

Trying to decide between going to OPA, Edo or Fatburger at lunch and having a little time to eat it or going to McDonald's and being late for your next class when you don't drive.

Thinking you got away with skipping class on Friday, then you get the snitch ass automated phone call on a Saturday.

"This is a call from Centennial High School. A student in your household named: ____, was absent from one or more periods..."

Dreading having a locker in the art wing.

Watching 10th graders struggling to remember which wing their locker is in at the beginning of the year.

Struggling to remember which wing your locker is in at the beginning of the year.

Trying to understand why the school thought the concrete barriers in the parking lot were necessary.

When there's a random gym class running through the halls.

Standing outside freezing waiting for some sort of drama to happen... that never happens.

And when it does happen, you missed it.

When our lunch dance breaks were more lit than Cent parties.

The hangout spot after school and during lunch was the parking lot.