Nickelback will always hold a special place in the hearts of Canadians. With their collection of '00s-era hits like "Photograph" and "How You Remind Me." Hailing from Alberta, this rocking quartet broke onto the popular rock scene in 2001 (boy am I getting old) with their third album Silver Side Up. However, in recent years these Albertan rockers have drawn the ire of nearly every sane music fan and have become a symbol of ridicule. Whether Chad Kroeger's having rocks thrown at him during a concert, which is in fact the first thing Google suggests when typing "rocks thrown at", or their simple churning out of terrible music, people around the world love to hate this group.

There is one thing however that music fans seem to dismiss, or simply ignore, which is that Nickelback can create a MEAN standing promotional pic. If you go ahead and do a quick Google search of Nickelback you will be blessed with the greatest array of plain, awkward, and, most of all, baffling depictions of four grown-men just standing around. Luckily, you don't actually have to do this as I've already done the honour, and I now present to you the 10 most memorable Nickelback photoshoots. 1. Nothing Says Cool Like Standing On A Bunch Of Boulders Near Some Water

If you look closely, Chad Kroeger asserts his dominance over the band with the gentle caress of his inner thigh, while the rest of the band is left to put their hands in their pockets. 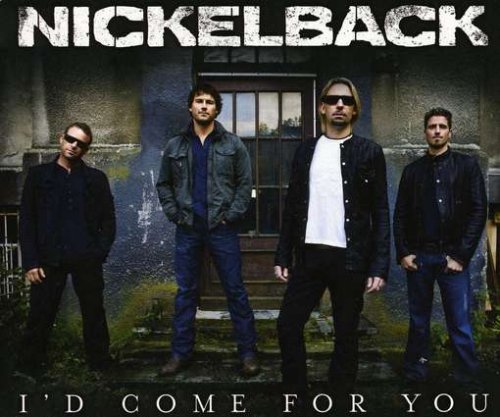 Chad's not exactly sure how to cross his arms, but he still doesn't give a fuck. “I’ve had enough of these open-field and ocean shots. Let’s find some ambiguous, rusted metal to stand in front of.” - probably what Chad said, maybe.

Chad went full-"male model" for this photo shoot. The guy on the left has the most tasteful soul patch. It was not in the least a goofy and/or ill-advised facial hair choice.

Look at how much fun they're having. They seem just like a bunch of regular dudes. Seem being the operative word here.

6. Shrubs Of The Heart

Chad's in the corner like "hehehehe." You really see the true versatility of Nickelback in this shot. One minute they're looking tough in an undisclosed area, next they're in a field, the shrubbery is slightly overgrown, and the whole thing is black and white. So artsy. The "won't we look cute if we all stand in a row, poking our heads out" photo shoot. Yeah, this was a good idea guys.

Chad still has absolutely no idea how to properly cross his arms. Guy on the right of Chad is like: "yeah this photo shoot is dope, and if you don't like it, I'll mess you up."

The early days, when Chad tried to start the new trend of sticking one finger in his pocket. Guy on the far right is just so intimidating.

10.  Stand Up In The Middle Of The Movie And Block The Projector

Chad's pissed because he was really enjoying the flick, presumably Tobey Maguire's Spiderman to hear his seminal "Hero".