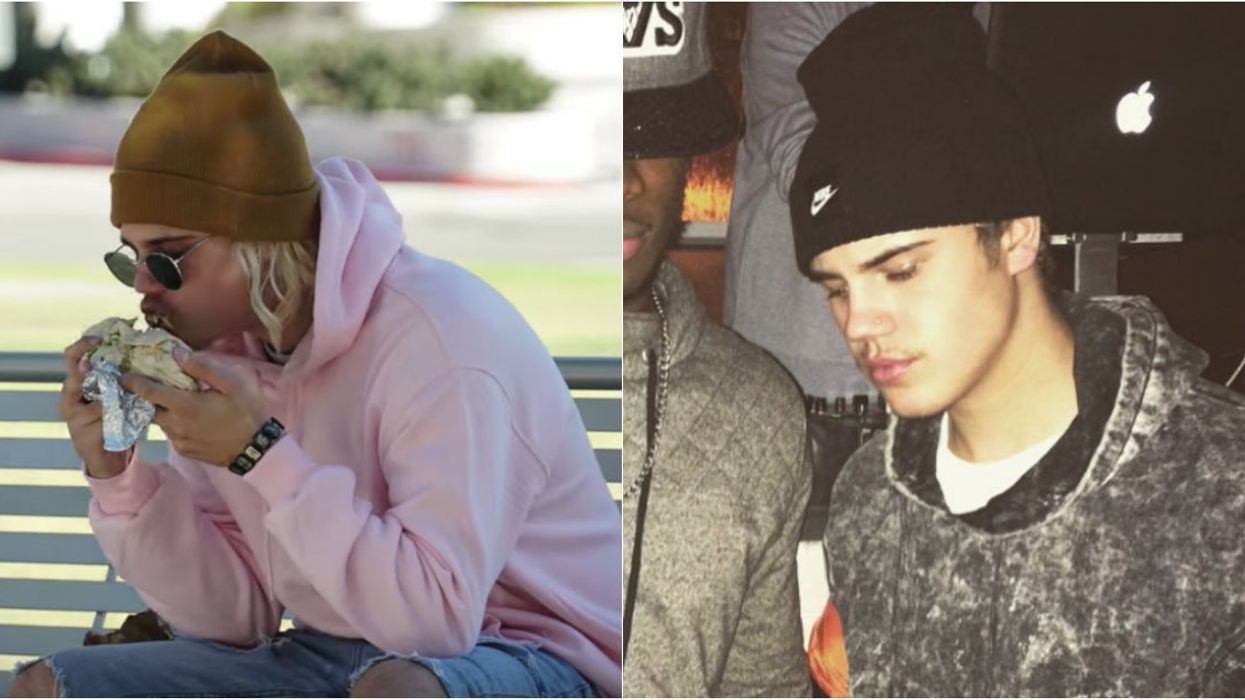 Unless you've been living under a rock, you know that the last few days have been a great debate online about Justin Bieber and burrito etiquette. What sounds like an absurd conversation began after a photo of the Bieb's began circulating online where instead of eating a burrito top to bottom the international musician took a giant awkward bite right in the middle.

Yet now, the YouTube team at Yes Theory is taking credit for pulling off the prank with the Canadian model and Justin Bieber look-alike, Brad Sousa.

On Thursday Ryan Bassil tweeted out his genuine concern that Justin Bieber did not understand how to eat a burrito after a weird paparazzi picture started floating around on social media.

READ ALSO: Ariana Grande Is Officially Going On Her "Sweetener" Tour And She Will Be Performing In 4 Canadian Cities

Yes Theory posted a video on Sunday taking credit for creating the weird paparazzi mix-up, claiming that it was an original prank they planned to help fool the internet.

So who is the man behind the fake Bieber hoax? Brad Sousa is actually a fellow Canadian who was flown out by Yes Theory to ensure the prank would be believable enough to go viral.

Here's everything you need to know about Brad Sousa, the Justin Bieber look-alike:

While Sousa's Instagram has plenty of pictures in Toronto, the Bieber look-alike is actually from Cambridge, Ontario, just an hour away from the Canadian singer's hometown of Stratford.

Believe it or not, Bieber and his fiancee Hailey Baldwin actually just bought a house in the Cambridge surrounding area and were seen at a local Tim Horton's over the weekend!

If you're not from Ontario, Cambridge is part of the Tri-Cities alongside Kitchener and Waterloo. Sousa attended the Oktoberfest celebration in the neighbouring town of Kitchener when he was mistakenly taken as Bieber.

That's when Buzzfeed covered how much he looks like Bieber and he even did an interview with the local radio station, 91.5 The Beat.

Clearly looking almost identical to Justin Bieber has its perks! Not only does Sousa model, but he also has a hefty following on Instagram sitting currently at 21.4 K at the time of posting.

4. You can regularly spot him at Brixton Social Nightclub.

According to Sousa's Instagram, you can definitely find him at the nightclub Brixton Social in Waterloo. The Canadian native has multiple photos at the club which brings his Bieber-like facade to a whole other level.

That being said, in the summertime you're probably more likely to find him at the Cabana pool-bar in Toronto.

One thing Justin Bieber and Sousa do have in common is their bad habit of smoking the occasional cigarette. There are multiple photos on Sousa's Instagram that show him with a smoke in hand.

Meanwhile, the Bieb's promised he would quit smoking back in 2016 but has been seen with a cigarette multiple times since.

6. He is actually a YouTuber himself.

Brad Sousa may be the star of the Justin Bieber burrito hoax and a major role in the Yes Theory prank, but he actually has his own YouTube channel. Sadly for us, it seems like the Bieb's fellow Canadian twin doesn't upload to it very often, with his latest video being 8 months old.

That being said, you can still check out his 3 existing videos to learn even more about the daily life of the Justin Bieber 2.0.