The Canadian musician reportedly has a bun in the over with model fiance Hailey Baldwin. 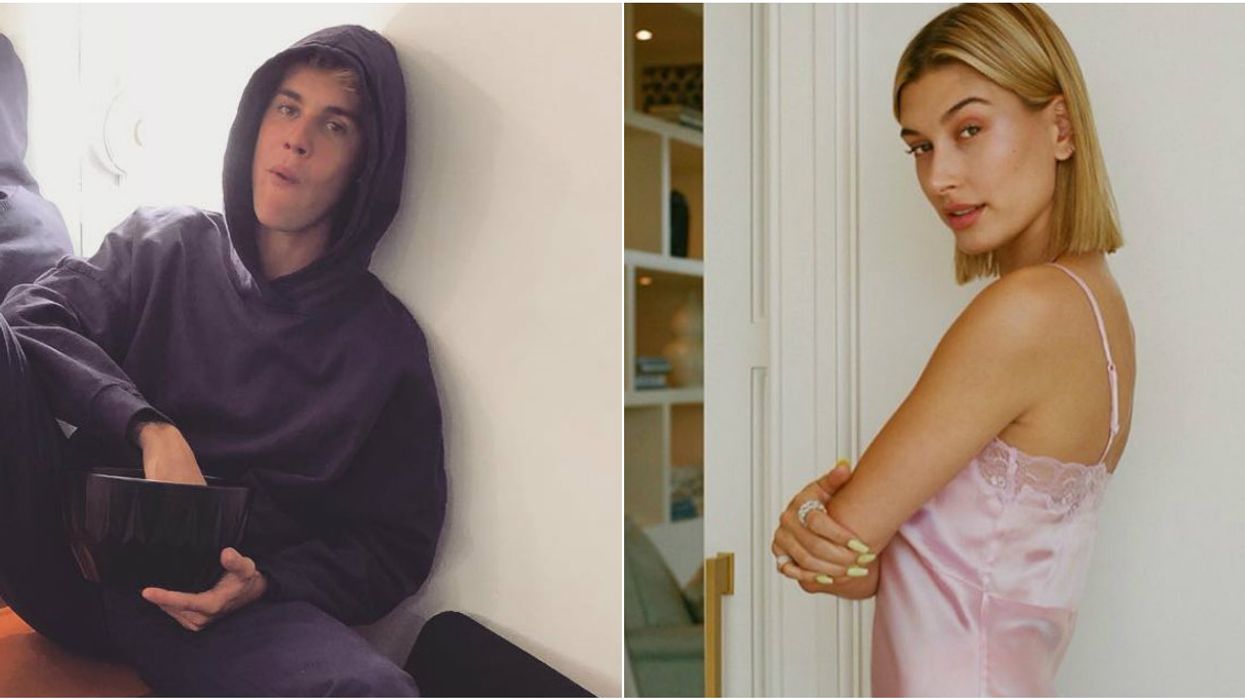 If you've been following the whirlwind romance of Canadian musician Justin Bieber and American model Hailey Baldwin, you know that their relationship hasn't slowed down since reuniting earlier this summer.

The couple got engaged after only a month of dating and now, everyone is speculating on where (and when) Bieber and Baldwin will tie the knot. Now a new Instagram picture from Jeremy Bieber, Justin's Dad, has people curious whether or not there is an alternative motive for such a hasty wedding day!

A new post from Justin's Dad showed the Bieber patriarch and his 5 children (Justin, Jaxon, Jazmyn, Bay, and step-daughter Allie) but the caption has Bieber fans shook up.

READ ALSO: Justin Bieber Only Follows 91 People On Instagram And Hailey Baldwin Isn't One Of Them Jeremy Bieber captioned the photo "To be father #Bieber's" and now fans think that Justin's dad has let slip that Hailey Baldwin is pregnant.

Considering that Jeremy is already a dad four times over, only Justin or Jaxon could be a father to be. When you take into consideration that Jaxon Bieber is literally a child, there is no way Jeremy is implying he's about to be a father.

Nothing touches having all your kids together. 3 generations. #ProudFather

Jeremy also tweeted out on Sunday that nothing is as touching as having all your children together at one time since Justin and Hailey were in Ontario visiting. He finished off his tweet by stating "3 generations", which only makes sense if one of his children was having a child.

Of course, while it's wild that Justin's father would spill the beans so easily, he is probably overflowing with joy for his son. Both Bieber's parents were over the moon when news broke of the singer's engagement to Baldwin. After the pair was spotted back together in June, the world was still recuperating from Bieber's breakup with longtime on and off again girlfriend, Selena Gomez. Baldwin, who is 21-years old, and Bieber, who is 24-years old, proceeded to make out all over America before the singer proposed on vacation one month later in the Bahamas.

When news broke that the pair had gotten engaged after only a month of dating, fans were quick to assume that the model was pregnant, as if that was the only reason that the couple were in such a rush to get married. In fact, reports from July had suggested that Hailey was actually already three months pregnant at the time of their engagement, meaning that the couple would have had to been dating a month before the media caught on. When paparazzi bombarded Bieber about the rumours he didn't deny any of the claims.

While Baldwin was clearly not pregnant at the time, it's been a few months since the couples initial engagement. Bieber previously told Glamour that he wants to be settled down by age 30 and considering the pace this couple moves at, it wouldn't be entirely surprising if they feel ready for parenthood. Both Baldwin and Beiber aren't shy about their love for kids, even with their social media feed's displaying a ton of pictures hanging out with babies and kids. It's hard to deny that being parents would be a good look on them, and not only that, the couple has tons of Hollywood friends that are guaranteed to babysit.

Of course, we will be waiting for either Justin or Hailey to confirm these reports themselves before we send them a baby shower gift but things seem to be mighty serious for these two. Here's hoping Baldwin doesn't pull a Kylie Jenner because we're dying to see her with an adorable Bieber baby bump!

READ ALSO: Justin Bieber Just Revealed How Much He Plans To Spend On His Wedding And It's Unbelievable