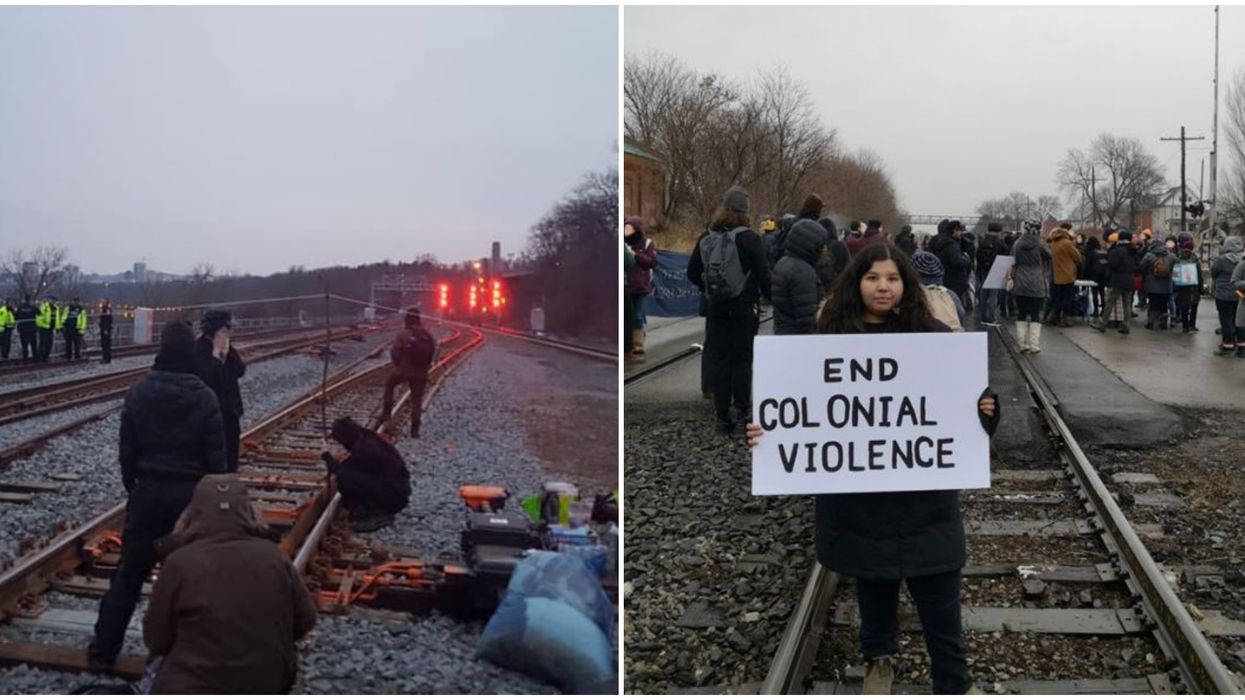 Protests in solidarity with Wet'suwet'en chiefs are still affecting GO Transit in the Hamilton and Niagara region. And, amid route disruptions and debate over the legality of the action, police have issued an injunction in an attempt to force a resolution to the situation. They have informed participants in the Hamilton rail protests that they must leave the area "peacefully."

According to Global News, protesters have set up a rail blockade on the train tracks between Aldershot GO and Hamilton GO in solidarity with the Wet’suwet’en Nation and recent protests.

As reported by CBC's Farrah Merali at 3 p.m. on Thursday, Metrolinx has confirmed the protests will heavily affect the evening commute in the area.*

Lakeshore West trains will depart out of Union Station as scheduled but will only go as far as Aldershot GO station.

A Hamilton Police spokesperson told Narcity: "Hamilton Police respect everyone's right to freedom of expression and peaceful assembly. Police will continue to use discretion to balance this right while also upholding the law.

"Protesters have been served with an injunction by CN Rail to leave the area. Hamilton Police are encouraging protesters to abide by the injunction and peacefully leave the site."

Const. Jerome Stewart told CBC that anyone who remains at the scene of the protests will be in violation of the court injunction.

It is unclear at this point what potential punishment protestors could face in return.

No rail traffic moving past Aldershot station on the CN line. But there is some shunting underway at Aldershot invo… https://t.co/240UuM5tsM
— 𝚂𝚎á𝚗 𝙾’𝚂𝚑𝚎𝚊 (@𝚂𝚎á𝚗 𝙾’𝚂𝚑𝚎𝚊)1582651941.0

"As an alternative, GO buses are shuttling customers between those four affected stations and Aldershot and Burlington GO stations, where they are able to connect with a Lakeshore West train," says Aikins.

The protest had started just hours after the Ontario Provincial Police had removed a blockade in Tyendinaga Mohawk Territory, east of Belleville, Ont., that had lasted almost three weeks.

According to Aikins via Global, Metrolinx does not own the tracks where protestors have set up camp.

“In the area where this police investigation is underway, it is not our tracks," Aikins said. "It’s not Metrolinx-owned tracks so we don’t have jurisdiction over it.

"So the CN police are there, along with Hamilton police and our transit safety officers are there, but their role is to observe and to ensure everyone stays safe and beyond that, there is no action that we can take.”

Customers are able to take bus shuttles departing from those stations and will connect them with train service at either Aldershot or Burlington GO, according to CBC.