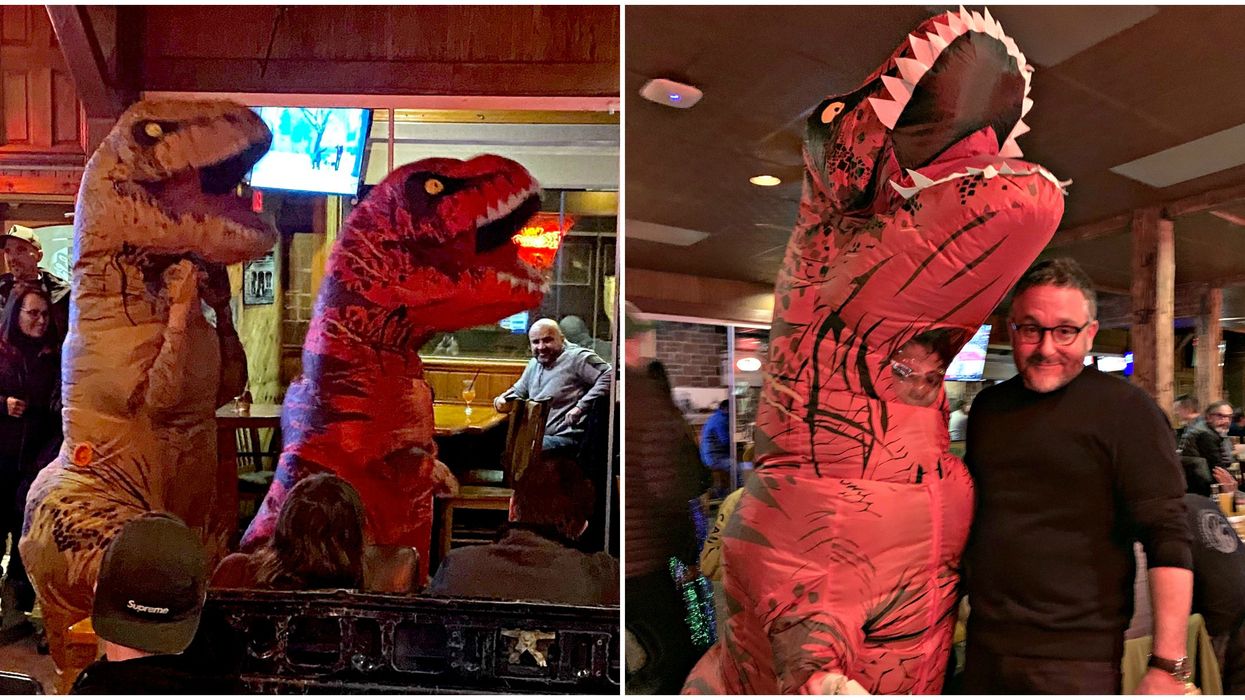 The third installment of the Jurrasic World series has been filming in B.C. recently, much to the delight of fans, but one super-fan took things to the extreme. Dressed up in one of those inflatable t-rex costumes, they actually crashed the Jurassic World: Dominion party in Merrit, B.C. and the crew wasn't even mad. 12-year-old Theo Chapman even got to meet the director and the photos are unreal.

Lynda Etchart, mom of the t-rex costumed fan, said they were inspired when the crew started filming in their hometown.

"Naturally, in our sleepy town of Merritt, not a lot of action happens. But then Jurassic World decided to film in Merritt. So then it became, LIGHTS, CAMERA, ACTION!" she wrote to Narcity.

Her son, Theo Chapman, is obsessed with the movies. So when his cousin visited with a 7-foot-tall inflatable t-rex costume, the boy jumped at the opportunity to run around town with it.

At first, he stuck to walking through the streets, bringing smiles to locals' faces. But when Etchart heard that the cast was having a wrap party the next night, they couldn't resist dropping by.

"We decided it would be funny to walk the perimeter of the Pub knocking on the windows and waving. The whole cast and crew immediately started waving this mysterious dinosaur into the pub," said Etchart to Narcity.

Once inside, Chapman got to meet all the crew members and even the director.

One of the crew even donned their own dinosaur costume and challenged the boy to an impromptu wrestling match. They didn't realize they were battling a 12-year-old, but the two had a laugh about it once the costume came off.

"The whole, like, production and directing crew was there. And I got to see them all," said Chapman to Narcity.

He even got to take pics with the film's director Colin Trevorrow.

Despite dressing like a t-rex, Chapman said his favourite dinosaur was actually the velociraptor.

Can't say we blame him.

After he left, the crew gifted Chapman a dinosaur costume of his own, after learning he'd borrowed his from his cousin.

Chapman said his favourite Jurassic Park movies are: "probably the two latest ones. They're both pretty good."