He made it all about the Maple Leafs. 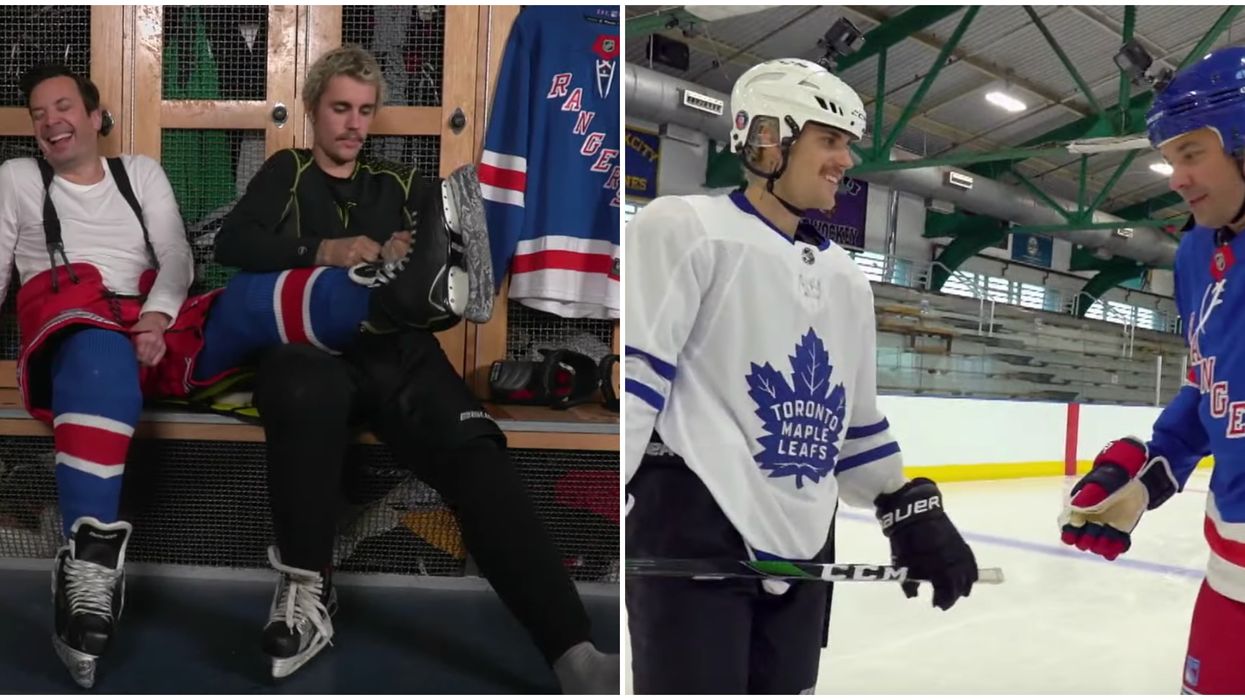 Stratford-born Justin Bieber is no stranger to showing off his Canadian roots whenever he can. Since his hometown hockey team is the Toronto Maple Leafs, he's often seen supporting them by repping gear and attending games. In a recent appearance on The Tonight Show Starring Jimmy Fallon, Justin Bieber gave the talk show host a hockey lesson and wore a Leafs jersey for the occasion.

The "Yummy" singer took Fallon to the rink to teach him the ropes of skating, stick handling, and head-to-toe hockey gear.

When they arrived at the arena, Fallon, who wore a New York Rangers jersey, said, "We're gonna play some hockey, or as they call it in Canada..." to which Bieber awkwardly responded, "Hockey."

Bieber looked pretty comfortable in his skates as he glided down the ice and showed the talk show host how to do skating drills. Fallon fumbled on his feet a bit and at one point was even crawling on hands and knees to the line Bieber told him to skate to.

After a shootout challenge that Bieber won, they rode around on a Zamboni while the singer belted out "Oh Canada."

Afterwards, Fallon thanked Bieber "for the help" with his hockey skills on Twitter.

Bieber's appearance on The Tonight Show comes days after he was on Saturday Night Live, both located in New York.

Last week, while he was in the city taking a break from SNL rehearsals, he and wife Hailey Bieber were spotted on a dinner date. Hailey was even seen wearing a Toronto Maple Leafs baseball cap, a nod to her husband's team.

In January, he shared a photo with his wife cheering on the Leafs at a game.

Back in December, Biebs visited the team while he was home for the holidays. "Got out on the ice with all of my childhood hockey buddies oh and these 3 legends," he captioned the group photo, tagging Leafs players Mitch Marner, Auston Matthews and Tyson Barrie.

If you can't get enough of Canada's pop sweetheart, today marks the drop of his fifth album Changes. The general sale for tickets for his Changes Tour are now available on Ticketmaster, and the star will be stopping in cities all over the country.