A Liberal Candidate Had Trudeau's Face Removed From Her Campaign Car

She insists that there was no political motive for the removal. 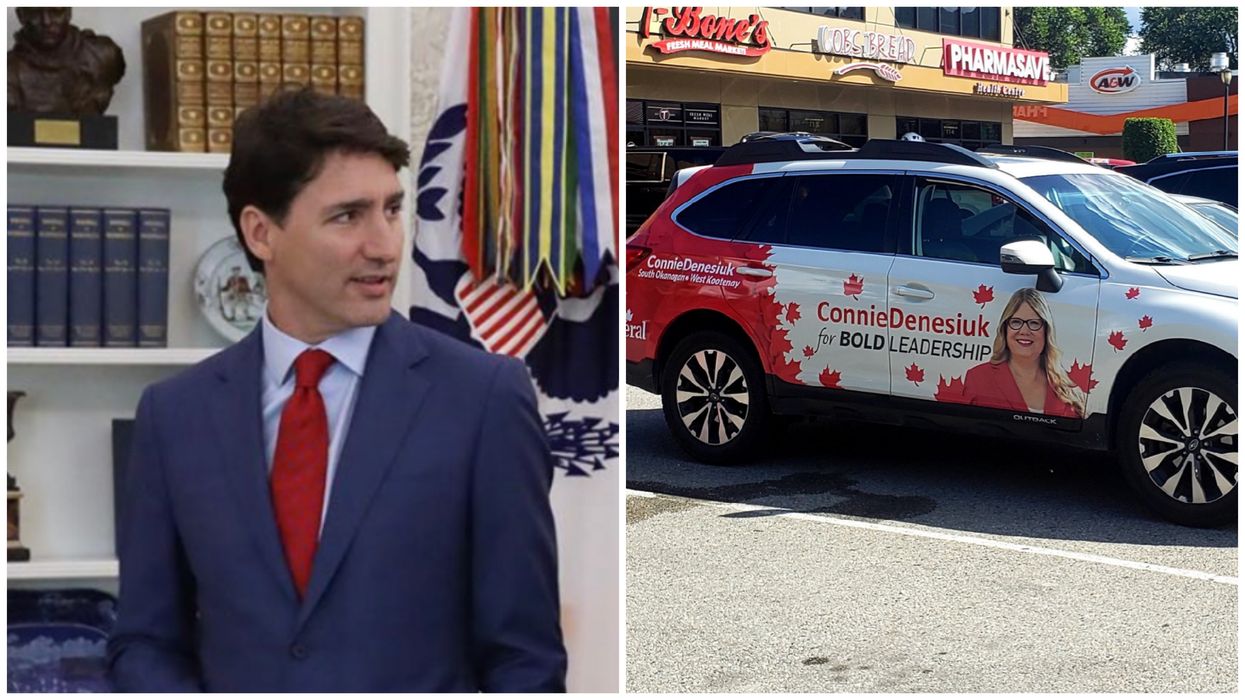 For most people the idea of having your own or another human’s face splashed across the side of your personal vehicle sounds a bit... much. However, for political campaigners and federal candidates, it is a great way to jazz up your campaign car and really get your face known around town. That said, one Liberal candidate’s vehicle has drawn a significant amount of attention over the past week, as Justin Trudeau’s smiling face appears to have vanished from the side of the car.

This year, Connie Denesiuk is running for the second time as a Liberal candidate in the upcoming federal election. Denesiuk also ran in 2015, in the riding of South Okanagan — West Kootenay, in BC. While Denesiuk’s loyalty to her riding and party have remained the same over the years, eagle-eyed Conservatives have noticed that there is one considerable difference in her 2019 campaign, Justin Trudeau is missing from her campaign car.

During her campaign in 2015, Denesiuk’s brand new Subaru featured a smiling picture of herself and the now-Prime Minister splashed across the front doors. This year, however, there appears to be one less smiling-face on the side of the car, and it isn’t Denesiuk’s.

The change was first publicized by fellow politician and Conservative MP, Dan Albas, from a neighbouring riding. On his official Twitter page, he posted, “Same Liberal candidate from 2015 is running again in South-Okanagan West Kootenay in 2019. Something seems to be missing ...." Two pictures were also included in the tweet, a ‘before’ and ‘after’ photo of Denesiuk’s car.

Several users on Twitter were quick to respond to the tweet, with a number of tweets suggesting that Denesiuk had removed the Prime Minister’s picture on her car because she no longer wanted to be so directly associated with him. One user commented, “I guess the JT brand is not as shiny anymore.”

Another added, “Even his own party think #TrudeauMustGo.”

Despite this,  Denesiuk insisted that there was no political motive in having Trudeau removed from her campaign car. Speaking on the matter, she said, “In 2015, I wasn't well known in the West Kootenay, and, so, it was important to connect people with who I was, Team Trudeau."

Although in 2015 the New Democratic Party's Richard Cannings won the riding, Denesiuk still had some success in the election, increasing Liberal votes by more than 20 percent. She also managed to spend considerably less money than her competitors, the New Democrat Party and the Conservatives.

Denesiuk made it clear that the real reason for the change was purely cosmetic. She noted that while she does still have Team Trudeau written on the front of the car, she simply managed to get an updated, bigger picture of herself. “It’s bolder,” she said, which ties in better with her new campaign slogan, “for bold leadership.”

Denesiuk concluded that she had no interest in playing, “that kind of politics.”

The federal election date is currently set for October 21, 2019.