The fanny pack is what makes it. 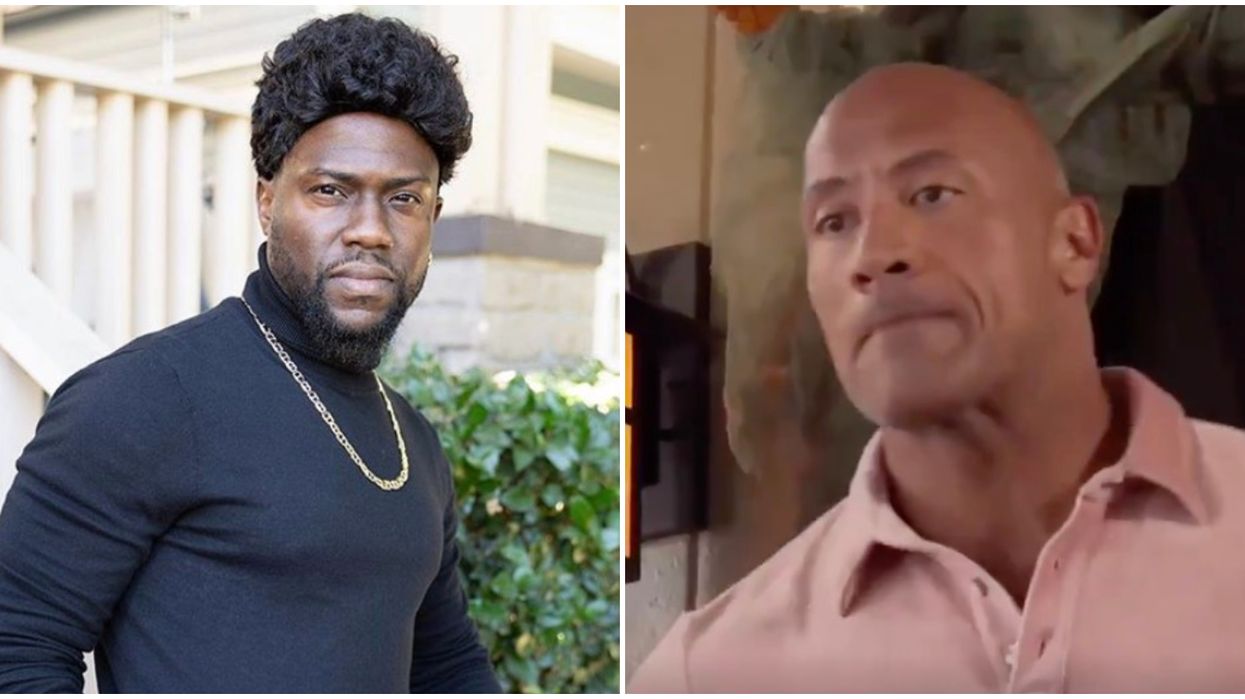 People love to get into the spirit of Halloween, especially celebrities, who throw all of their efforts into getting the perfectly hilarious (or perfectly spooky Halloween costume). Comedian and actor Kevin Hart's Halloween costume in 2019 managed to be both. It was hilarious but also spooky for whom it was supposed to look like: a retro Dwayne Johnson.

Kevin Hart's costume, based on a classic photo of Johnson from the 90s, finds the actor sporting a black turtle neck, a curly wig, chain, bracelet, jeans, and even a fanny pack. Hilariously enough, the outfit is a spot-on imitation of Johnson's wardrobe in the old photo.

Not only that, but Hart totally nails the pose Johnson is pulling in the photo, even without a mantle to lean on.

According to his Instagram, the photo made Hart laugh at himself. "This sh*t makes me laugh. #NailedIt #HappyHalloween #PeepTheNapkinUnderMyElbow," Hart wrote in the caption.

That last hashtag is a nice little nod to a small detail in the original photo which is also recreated. A napkin is resting under Johnson's elbow as if it's protecting the sweater from some dust on the ledge.

Of course, considering that Hart and Johnson are good friends (and have a movie to promote), Johnson responded on Twitter with faux outrage and a heartfelt message to his friend.

"Of all the things my best friend @KevinHart4real can dress up as for Halloween.. He comes back from injury to stick me with this dirty, rotten, HEARTLESS LOW BLOW. 💔😂Love ya brother. Good to have you back. New JUMANJI trailer drops TOMORROW! #happyhalloween #fannypackrock," Johnson wrote in an October 30 tweet.

Of all the things my best friend @KevinHart4real can dress up as for Halloween.. He comes back from injury to stic… https://t.co/deR0ClgwfI
— Dwayne Johnson (@Dwayne Johnson)1572478321.0

The tweet included a video, in which Johnson is handing out some candy to eager trick or treaters, only to be confronted by Hart in his costume.

"It's my costume," Hart says. "All you gotta do is go to the costume store and say 'make me look stupid.'"

"Here's what you get," Johnson replies, denying Hart a king-size candy bar. "It's bite-size, tiny, mini, like you."

Despite their argument, it's obvious that Hart and Johnson are having fun together. Johnson's message to his friend is in reference to Hart's nearly fatal car accident that occurred in September 2019.

Johnson recently took to Instagram to wish his mother a happy birthday.

Kevin Hart had been in Montreal in August working on some projects, and shared what he loved least about the city.

Hart and Johnson have previously had their own friendly feud on social media involving photoshopped pictures of each other as children.