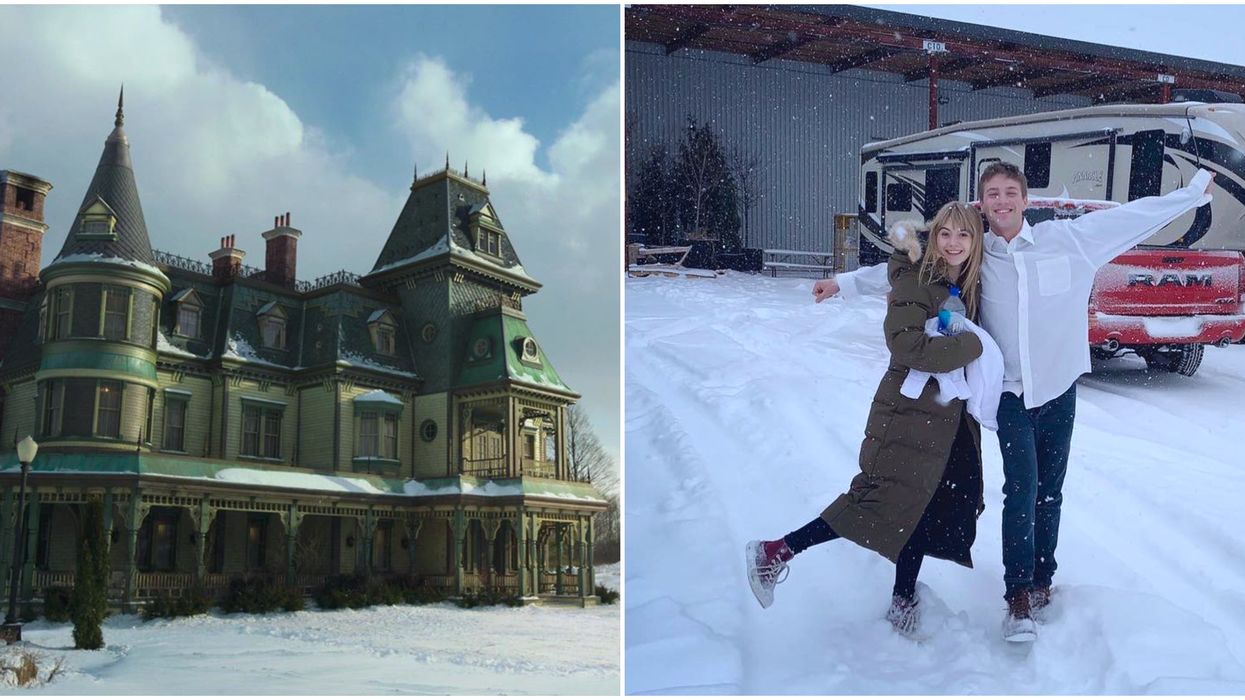 If you thought a couple of the scenes in Netflix's latest mystery series looked familiar, you're right. Locke & Key was filmed in two different Canadian cities, Toronto and Lunenburg Nova Scotia. That's not the show's only connection to the north, though. One of the stars is a canuck just like us.

Connor Jessup plays Tyler Locke, whose family moves into a mysterious old house after the murder of his father. We won't spoil it for you, but things get supernatural.

In an interview with Narcity, the 25-year-old revealed what it's truly like filming in Canada.

"For me, it wasn't just my home country, it was in my home city," Connor said about working in Toronto. He told Narcity that he hadn't gotten this kind of opportunity a lot in the past 10 years.

"It really was an amazing gift to be able to work for so long at home and sleep in my own bed and to see my parents and friends," he said.

The young star also took advantage of being the local expert in the Locke & Key cast.

"Usually I'm the one who was in from out of town and most of the main cast on the show was from the US or the UK," he said.

He said he especially enjoyed playing tour guide and taking his castmates to places like the Lightbox to catch a movie.

"It's nice when you get to work and spend your time with people who don't know Toronto, cause it does make you see your city fresh," Connor said.

As for filming in Lunenburg, Nova Scotia the actor had lots of praise for the Atlantic town.

"I love the east coast, I've worked on the east coast a bunch. Those crews are really fun," Connor said. He told Narcity that in the past he has also shot in Halifax and Newfoundland.

But there is one big drawback to filming in the True North and that's the weather.

The first few episodes of Locke & Key are set in the winter and while it looks snowy on-screen, Connor says it's even worse in person.

He told Narcity that shows can't capture heat or cold very well and it's "so much more unbearably cold than you can ever imagine from watching it."

The actor revealed that the weather can also make things tricky while working.

"We had days outside where it was like -40, and I had never encountered this before, you realized at that temperature when you're outside your mouth starts to stiffen and I couldn't say consonants anymore," he shared about the cold.

Even growing up in Canada couldn't prepare Connor for the freezing temperatures.

"You try and put on that brave Canadian face for like two weeks, this is fine, shorts and a t-shirt, whatever," he said. "And then after a couple weeks you're like this is really cold."

Another Canadian connection coming out of the show is hockey. The character, Tyler Locke, is a pretty talented centre, but Connor reveals it's all the magic of television.

"I played very poorly when I was maybe like 7 or 8, I did a couple years in house league," the 25-year-old said of his hockey career. "In some countries, they have mandatory military service, in Canada mandatory hockey playing."

However, he connected with his character on a deeper level.

Comparing himself to Tyler, the young Canadian said, "I understand, I think most people understand the feeling, especially when you're a teenager, of being lost, of feeling so much and not knowing where to put what you're feeling, not knowing how to express it."

"That is a pretty universal feeling and Tyler doesn't know how to deal with any of that and he internalizes it and I understand that," the actor told us.

As for if we will get to see any more of the Locke family, it's too soon to tell.

The first season of the show has been out for just two weeks now but Connor says they are getting ready for a second one just in case.

"The writers have been working for a few months, so they're working on the scripts for the next season but we don't have an official pick up yet," he said. "They're working to be prepared."

He revealed that with Netflix it typically takes about a month after a show is released before you get any news but until then he says he's keeping his fingers crossed.