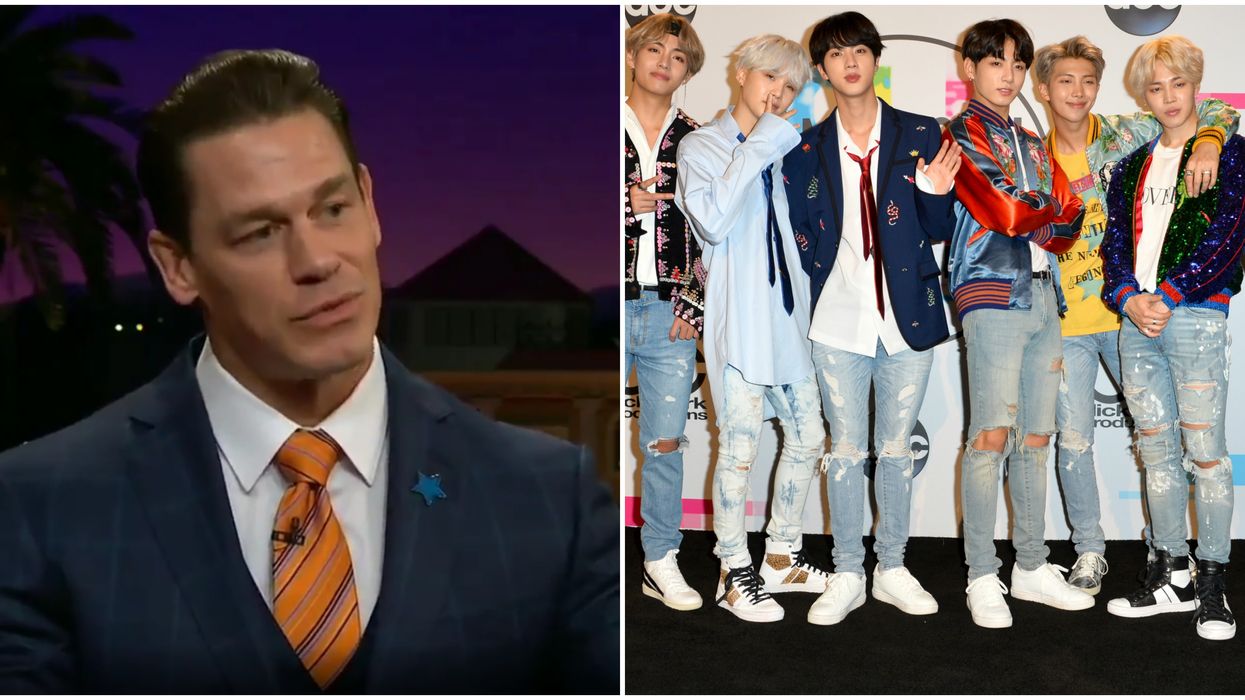 Professional wrestler John Cena has the ultimate man crush on the Korean boy band BTS. Last night on the The Late Late Show With James Corden in Hollywood, he gushed over their originality and even got jealous when fellow guest January Jones flaunted a pic with them. So how did this adorable John Cena moment play out?

It all started when Jones admitted she's not even a fan of K pop after posing with BTS. What?

She went on to say that she had no idea who they were: "I saw that they had like 9 million security guards, so I was like I better ask for a picture... Maybe they're running for President..."

John's face completely fell. "You are so lucky to be in that picture" he said in disbelief.

After posting the pic on Instagram, Jones said that fangirls warned her to stay away, citing "there was some stuff."

Cena practically jumped out of his seat asking "Stuff? They sent you stuff?!" "I tried out to be their bodyguard and was cut," the WWE star joked.

Cena went on to explain why he actually loves BTS so much, and his heartwarming message kinda makes us want to cry.

January Jones (and probably everyone else) was totally shocked to hear that Cena really is an 'army' fan of the group.

"The band's message they give to their fans is one of self-love, self-reflection, and being confident in yourself even though you may be different," John said.

You can see his adorable message in the video here:

Where in the world did that come from?!

While we know John Cena for being a huge body-builder esk human and successful WWE TV star, who knew he had a soft spot for Korean-pop bands?

After the show, Twitter completely blew up about the interaction. Some think that John is destined to meet the band in 2020.

But we really can't get over John's reaction while January Jones was talking about her experience meeting the band.

He has absolutely no chill. That's a total stan right there.

BTS, also known as the Bangtan Boys, is a seven-member South Korean boy band that was established back in 2013.

Their followers, known as the BTS ARMY, are some of the most loyal fans in music. And you can guarantee that John Cena is right there leading the way.

We just can't get enough of this huge man-crush moment.