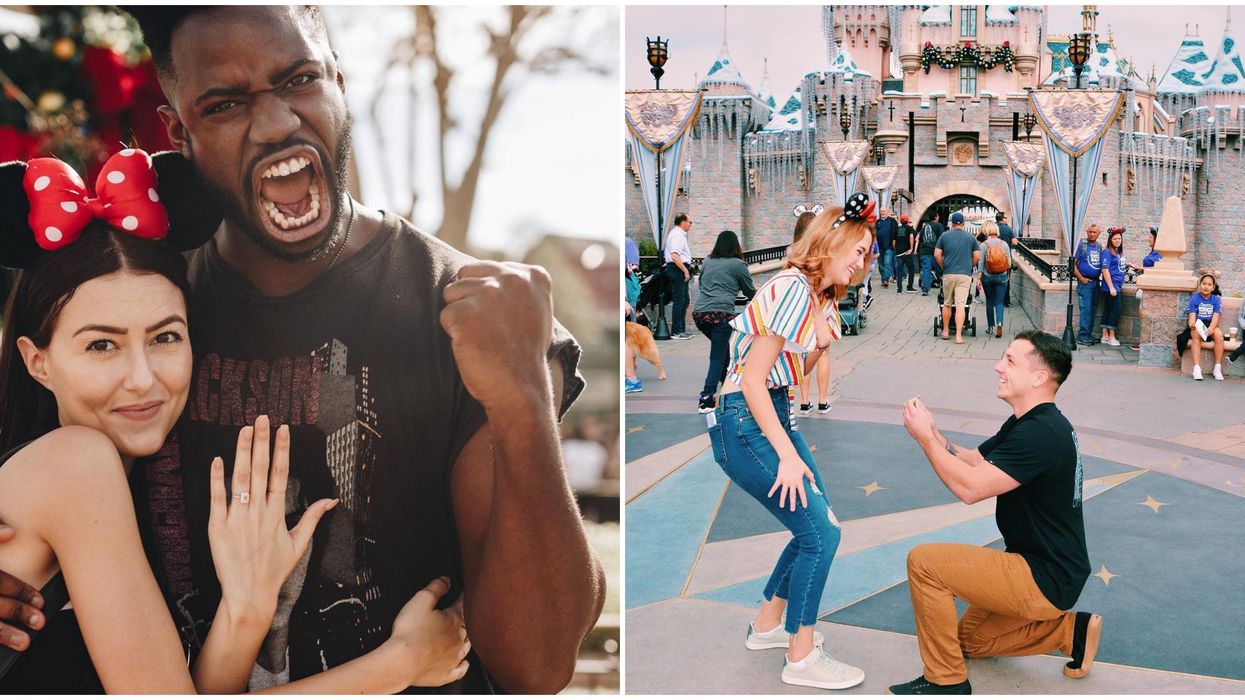 Whether you've already found your special someone or you're wishing on a star for that magical kiss, there's something special about a happily ever after story. What's a better place to ask your special someone to spend forever with you than at The Happiest Place on Earth? These Disneyland proposal stories just might make you believe in one true love. We're not crying, you're crying.

Lily and Bryant were always meant to be. The two met completely by chance in 2017 right before he was deployed. They both knew it was love at first sight. After two deployments and waiting, he came home for the first time in years. It had always been her dream to visit Disneyland, but they were five hours away from the park.

He woke up at 1:30 in the morning to drive them there, so they could spend a whole day together. He asked her for a picture by the castle and while they were taking the picture, he stooped down.

Before she knew it, he was down on one knee, ring in hand, asking "Please say yes. I love you, Lilly. Will you marry me?" Of course, her answer was yes.

Aren't they adorable? Like any sweet engagement story, Daniel and Gabriella's involved one nervous man plotting to keep a pretty big secret.

How do you hide the ring?

He said "I was a wreck for two days straight…. knowing it was coming, knowing I had to be brave, knowing she’d say yes, knowing our lives would be changed forever. The moment I got down on one knee, everything went silent. I didn’t hear my voice or anyone else’s; I just saw her. I’ll never forget that moment. We cried, we screamed, we kissed — we’re getting married! I’m so thankful. Gabriella, you’re better than anything I could’ve ever dreamt up. Here we go!”

Her Man Planned the Perfect Way to End the Dating Stage

Okay, okay. We know this one happened at Disneyland Paris, not California. But it's so romantic, we just had to include it.

These two took a whirlwind getaway to the most romantic city on earth and he popped the question with style.

If you ask us, a Disneyland proposal is the perfect way to end the dating stage.

After watching the iconic Villains show, John took her to a private spot by the pavilion and asked her to spend forever with him.

She said, "I SAID YES TO MY DISNEY HUSBAND. What a wonderful start into the day. This morning was full of love, joy, and surprises."

Friends and Family All Got In On This Special Moment

Lovebirds Sandra and Guadatino love to reflect on the day they chose to spend a lifetime together.

Four years ago, Sandra went to the park with her girlfriend thinking it was just a fun outing. Little did she know, she would make the biggest (and best) decision of her life.

Guadatino brought their friends and family! As she popped the question to her girlfriend, they held up their hand-made signs spelling out "Sondra, will you marry me?"

This Girl Made Her Fiance Reenact His Original Proposal at Disneyland

It still counts, right? Last week, Jonas proposed to his Nicole in a super sweet and sentimental family gathering.

Tears were shed and there was so much love going around. That same day he surprised Nicole by taking her to Disneyland to celebrate.

After learning his initial plan was to propose to her at the park, she made him reenact their magical moment at Disney.

They Fell In Love Kissing In Front of the Castle

Gregory and Craig fell in love while kissing in front of Sleeping Beauty's Castle (we're sensing a theme *wink wink*). Greg said, "The moment I knew I wanted to marry him. This is also actually the very first time we kissed in front of a castle. It started a tradition that we do every time we visit a Disney park."

Years later, he popped the question to his love in the middle of Disneyland's Main Street. The reaction is priceless.

If you have any plans of asking the question, why not do it at Disneyland? There are so many magical experiences to last a lifetime.