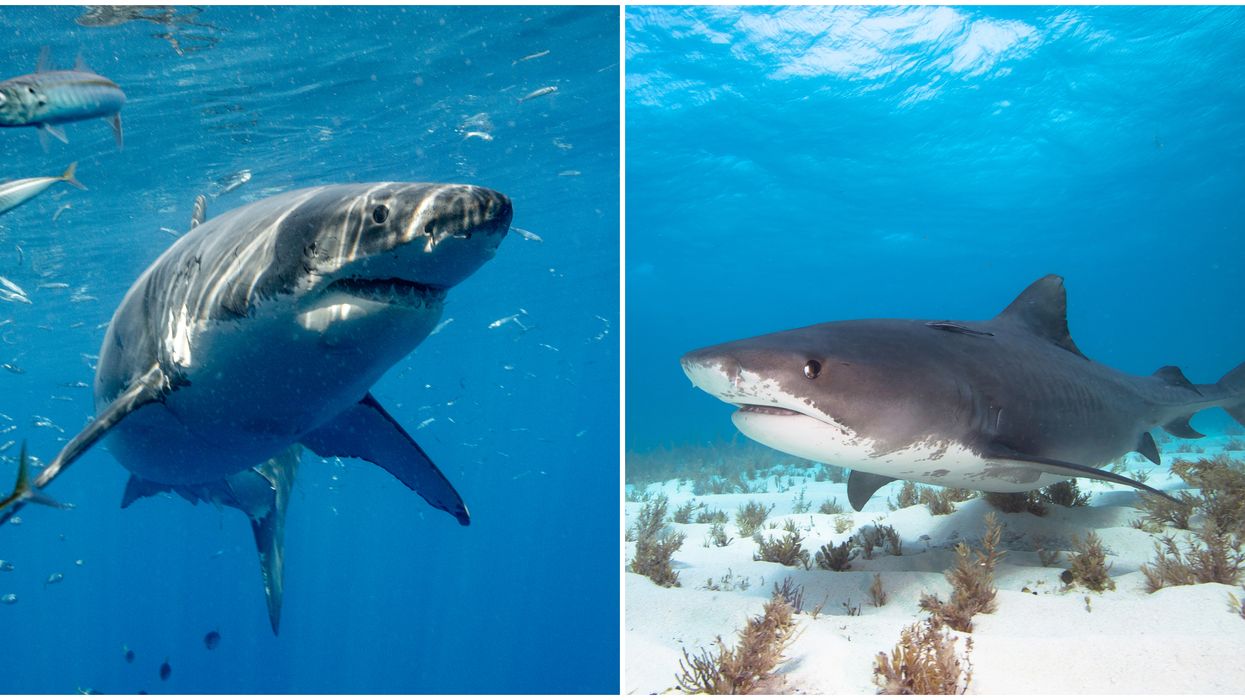 You can't always see what swims beneath the ocean's surface, especially deep down in the salty depths. However, we can see some of what lurks below thanks to marine life research, and multiple massive sharks are near Florida right now, surrounding the sunshine coastlines.

The sharks we can see are tagged by Ocearch; they focus on the conservation of marine life through research & outreach efforts, learning more about behaviors through tracking. These 4 sharks swimming around the Sunshine State have taken many journeys that Ocearch has documented & observed over the years.

2 of the sharks hanging out are great whites. They're currently hovering in the warm waters near The Keys, sticking together near the tip of Key West just past the Dry Tortugas National Park — which houses an abandoned military fort that now serves as a stunning structure you can visit out in the middle of the ocean.

The smaller of the two, Helena, comes in at 12 ft. 5 in. long, weighing a whopping 1314.3 pounds. She's made a few different trips to Florida this year now & was even here for Spring Break. We may as well make her an honorary Florida resident.

Hey world, I'm Helena the shark! @OCEARCH gave me a fancy new SPOT tag that will track me as I travel around the Atlantic. Get all my updates here! pic.twitter.com/Rvk2EAkoCC

Helena's size doesn't compare to her massive shark sister, Unama'ki, who stretches an astounding 15 ft. & 5 in. long & tips the scales at 2,076 pounds according to Ocearch. She received her tag and name meaning "land of the fog" in the coastal waters of Nova Scotia, Canada back in September; slowly swimming her way down to the Sunshine State in nearly a straight path.

We also see a couple of Tiger Sharks, one swimming near the coast of Jacksonville, the one further out in the Gulf of Mexico by Clearwater.

Lando's hanging out by Jax, & has visited us before. He seems to really like the east coast, previously visiting St. Augustine back in May. This adult Tiger Shark is only 10 ft. long, coming in at only 464.5 lbs — nearly 4 and a half times lighter than Unama'ki the Great White.

Further out from the west coast, we find Doug. He seems to really like the Gulf; his track shows him swimming in a nearly circular path there since September.

This little Tiger is only 9 ft. 9 inches in length & weighs 456 lbs. The smallest of the sharks visiting us right now, Doug was first tagged in Mexico, receiving his name from a collaboration with the Saving Our Sharks program at the Texas State Aquarium.

It may not be shark week anymore, but it appears to be Shark-O-Ween today in Florida's Oceans. The recent sewage leak in Miami may have something to do with the increase in shark visits to the sunshine coasts lately.

For more information about Ocearch, these sharks, & to keep track of them, check out Ocearch's website here.