This is the third time Bernier has tweeted about Thunberg! 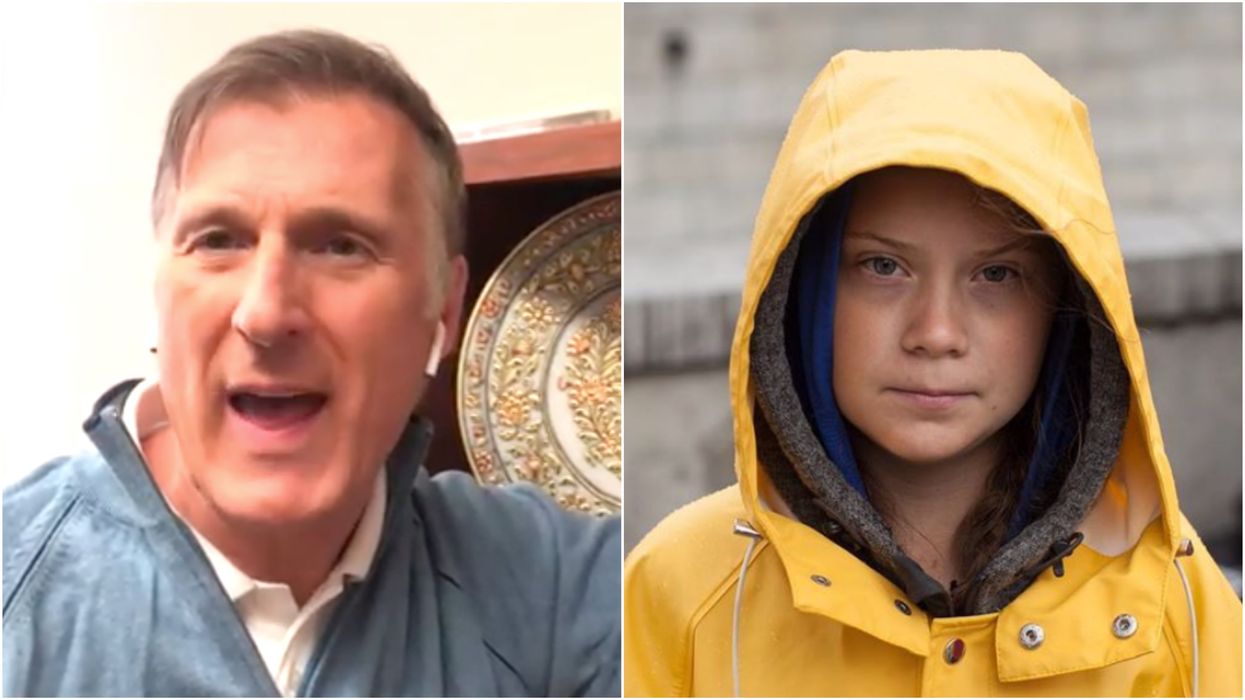 Over the past couple of weeks, the People’s Party of Canada leader, Maxime Bernier's Greta Thunberg opinion has been no secret. In several tweets since the beginning of the month, Bernier has attacked the 16-year old climate activist, from calling her “mentally unstable,” to suggesting she “could not possibly understand” climate change. Now, Bernier has gone for Thunberg once again, and this time he's dragging her family too.

Earlier in September, Bernier took to Twitter to denounce the climate message that Thunberg promotes, writing in a multi-tweet threat that Thunberg was “clearly mentally unstable,” among other things. His post was met with such strong backlash that he went on to retract his comments, and described the Swedish activist as "brave."

However, mere weeks later, Bernier went after Thunberg for a second time, this time more subtly. Retweeting an article that played down Thunberg’s understanding of climate change, Bernier quoted the text, “Kids of all ages are growing up as anxious political activists...participating in strikes... and ideological battles over issues they cannot possibly understand.”

Despite receiving considerable criticism from the Canadian public following his previous Thunberg-related tweets, Bernier has gone after Greta once again, this time calling out her family too.

In a tweet on Thursday afternoon, Bernier attached a collage of Thunberg and her parents, Svante Thunberg and Malena Ernman, all wearing the same Converse-brand inspired t-shirt, that reads, "Antifascist All Stars."

He added the caption, "Climate alarmism. Calls to radically change our economy and way of life and curtail our freedoms. Coordinated attacks against free speech. Antifa is a violent Far Left movement. Can you spot a pattern?"

@MaximeBernier Greta has already explained why she had the shirt on. She's traveling and needed a clean shirt and… https://t.co/Y2uqfBpLQS
— Loralie 🇨🇦🇧🇲🇬🇧 (@Loralie 🇨🇦🇧🇲🇬🇧)1569519982.0

Once again, the reaction to Bernier’s tweet was largely critical. One Twitter user responded to the PPC leader to explain, “Greta has already explained why she had the shirt on. She's travelling and needed a clean shirt and this is the one that was given to her. Shame on you."

Another added, “Max, you're just a fragile man who is threatened by a 16 year old because you know (and you agree with this) she has done more for the climate than you will ever consider doing. You're scared of her."

Only days ago, Thunberg took to her own social media accounts to discuss some of the hate and online trolling she had experienced over the last few months in the spotlight.

In an emotional and heartfelt post, she explained, “Here we go again... As you may have noticed, the haters are as active as ever - going after me, my looks, my clothes, my behaviour and my differences."

She went on, "They come up with every thinkable lie and conspiracy theory. It seems they will cross every possible line to avert the focus, since they are so desperate not to talk about the climate and ecological crisis."

Thunberg ended the post by saying, "I honestly don’t understand why adults would choose to spend their time mocking and threatening teenagers and children for promoting science, when they could do something good instead."

Whether or not Bernier cares what Thunberg thinks of him, she certainly doesn't seem to be too conerned with his comments about her!